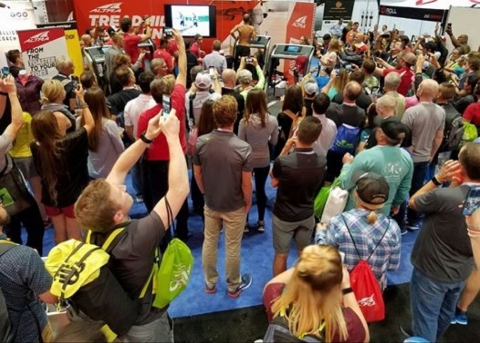 Surrounded by spectators at The Running Event, Jacob Puzey makes his way to a world record for fastest 50-miler on a treadmill. Photo: BusinessWire

There’s a light at the end of the tunnel somewhere, but snowflakes keep appearing on my iPhone and I don’t see so much as a lit match. The beginning of 2017 brought with it a with a flurry of snowflakes and frigid temperatures, and the west coast was hit hard. We were then blind-sided again without a reprieve from warmer weather.  So what’s a girl to do when training for a spring 100K while heading into the next ice age? Here’s what I’ve learned so far.

Being forced indoors by Old Man Winter is a brutal reminder of how wonderful fresh air can be. And dirt. When a snow storm dumps two feet of snow in your front yard and doesn’t melt after a day or two, panic can force a person to take extreme measures. Like running on a treadmill.  While I’m kind of kidding, the thought of jumping on a revolving belt can be a scary one.  I’ve dabbled with indoor running during past snow storms, but always experience PTSD due to a rear-end-over-head maneuver some years ago.  I love running in powder but when the plows aren’t out, neither am I. And I learned quickly that a treadmill can be a lifesaver. The boredom of running in place may seem imminent, but can be alleviated with intervals to break up a time clock that never counts down fast enough.  In the end, they can improve your strength and speed while you wait for the slippery, sloppy winter storms to subside.

Sometimes, a morning treadmill run can feel like an exciting adventure on the trails. If you’ve got your television or iPad accessible, watching a running film like “Finding Traction,” featuring elite ultra runner Nikki Kimball on her attempt to break the record on the 273-mile Long Trail, is a perfect distraction. And Nikki’s pace throughout the documentary will keep anyone moving swiftly. On the other hand, The Barkley Marathons might be a good movie with popcorn and a beer, but don’t try running on the treadmill while watching footage of this grueling, exhaustive ultra. You’ll be better off choosing from one of ultrarunning’s many films like JB Benna’s “Unbreakable,” and putting it on repeat while working through the miles.

Sadly, some of us have a busy household full of distractions. If you’ve got kids running around and the stress isn’t fading but rather continues to mount with every mile, cut it short and split your workout into two. Half now while the kids are on the loose, and half later when they’re tucked away fast asleep. Dividing your workouts in two makes a treadmill more manageable by splitting up the mileage into chunks throughout the day. While it might feel like you’re a hamster trapped in a wheel, there’s a certain comfort knowing you’re getting the miles in.

As you continue to watch each minute pass, the snow is falling and Baywatch is on the flat screen. Not a bad place to be, right? After resisting it for so many years, I’ve developed a fondness for this machine that beckons when snow-slogging only appeals for so long.  This alternative to running outside gives me a deeper appreciation for those hours that I spend soaking in the sun, and makes me hungry for the trails every time I push, “start.”