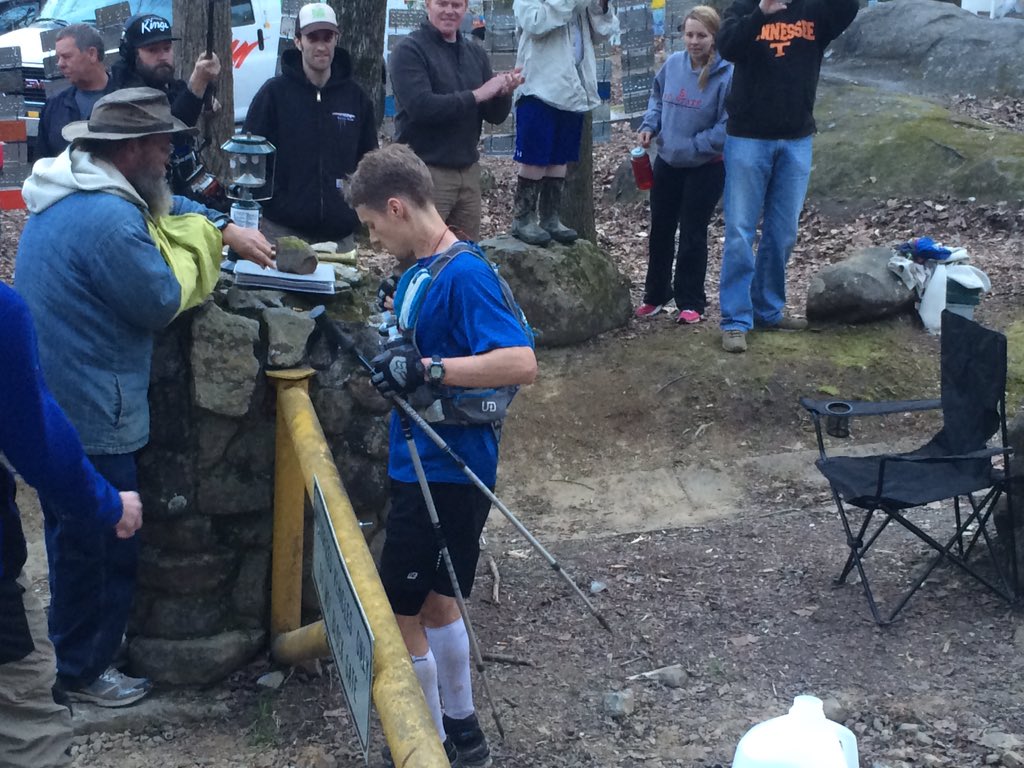 When The World Found Barkley

The world watched as The Barkley Marathons unfolded this past weekend – an ultra marathon that, for the past 30 years, has been virtually unknown to the general public.  That is, until a documentary about the mysterious race was recently added to Netflix – just in time to create some fanfare around this year’s event.  And that it did.  Thousands flocked to Twitter Saturday through Monday, for live updates on “The race that eats its young.”

The popularity of The Barkley Marathons has grown significantly throughout the ultrarunning community, as the sport continues to attract more participants every year.  In 2010, 200 entries were received and 35 were accepted.  This year, a few recognizable names were on the list of entrants including Jared Campbell – 2012 and 2014 Barkley finisher, Gary Robbins – well-known for his multiple wins at HURT 100, and Jennilyn Eaton – winner of last year’s Bryce 100.  Another popular person at this year’s event whose name, while probably not well known but will likely be remembered after, is Rhonda-Marie Avery.  Rhonda-Marie was the very first blind person to ever attempt the 100-mile (and then some) ultra marathon.

The Barkley Marathons Documentary was released in late 2014, but was only shown at local film festivals until it’s debut on Netflix early this year.  Whether or not this prompted all the attention of the media at this year’s event is unknown, but according to numerous sources, there were news crews from all over the world at Frozen Head State Park, the location of the start and finish of the event.  Race Director Gary “Laz” Cantrell must have kept inquiring minds in line, because the secrets of Barkley remain elusive.

Race updates were posted on Barkley’s Twitter account (@BarkleyMarathon), but the one keeping everyone on their toes throughout the race was Keith Dunn (@keithdunn), a long time Barkley supporter unofficially in charge of live updates from camp.  Keith let the world know when Rhonda-Marie and her guide runner had safely returned from their first loop after over 24 hours on the course, as well as keeping everyone on the edge of their Twitter feed during Jared Campbell’s approach to the yellow gate for the fifth and final time.

Media buzz surrounding an ultra is nothing new these days.  Word spreads fast when news crews get wind of a crazy feat of athleticism.  Watching live Twitter updates during an ultra is as addictive as the sport itself.  But what’s important to remember is that the day after The Barkley Marathons was over, as Keith Dunn tweeted, “One campfire. No cameras. Quiet. The 2016 Barkley is in the past.” And two men were bonded in a friendship that grew mile after excruciating mile, over hours that turned into days.  The media will come and go, but it’s the bond we share as runners that keeps us grounded in our love for the sport.

Hi, I could not find it on Netflix. Has it been removed already? Do you have the URL for it? Thanks!

It may be available in certain geographic locations only.

Thanks! I see it now.