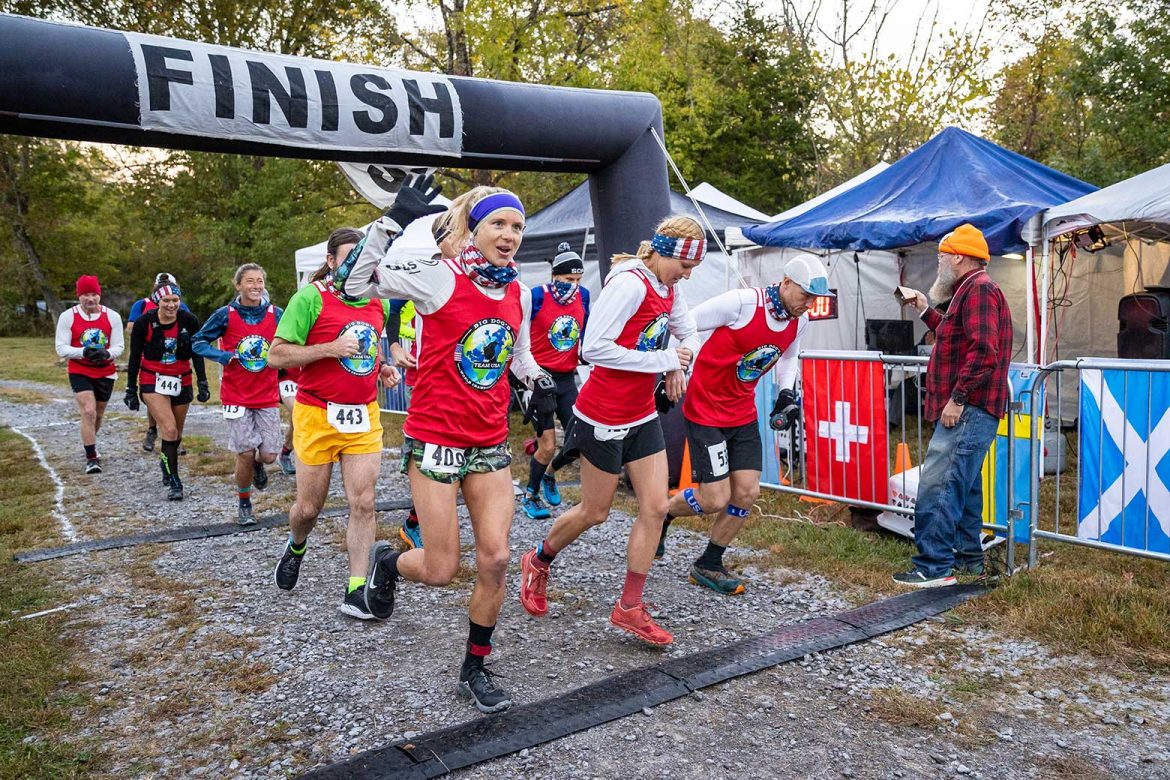 Team USA takes off for a loop at the 2020 Big Dog's Backyard. Photo: Howie Stern

With 60 entrants from around the globe, the Big Dog’s Backyard Ultra in Bell Buckle, Tennessee, on the property of Gary “Lazarus Lake” Cantrell, features a rematch of some of the top finishers over the last few years. Athletes from over 20 countries are expected on the start line of what’s quickly becoming one of the most popular ultrarunning disciplines around the world.

In this year’s race, everyone entered had to earn their spot; the national championships from 2020 that ran simultaneously last year really amplified the last person standing, run-until-you-drop race format. The growth is evident, with no clear favorite to take the 2021 crown.

“The Backyard is built for underdogs,” Cantrell said in an interview on Thursday afternoon ahead of the Saturday 7a.m. CDT race start. “They’re all coming to win, and they all have a chance to win.” The Salomon-sponsored broadcast will be live streamed until there is only one runner left, even if that pushes into unchartered territory—like four-plus days of running.

“I am thrilled to be at Big’s Backyard again this year,” the 2020 American champion, Courtney Dauwalter, said 48 hours before the start of the race. “It’s a great group of people in the race, and I hope we can all help each other keep lining up for more laps.” Dauwalter was pushed by her good friend Harvey Lewis, running for 68 hours and 283.33 miles last October.

Across the pond it was Belgian dentist Karel Sabbe who was the overall winner of the 2020 Big’s Backyard, being the first runner to last over 72 hours, making it 75 hours before his fellow Belgian, Merijn Geerts, failed to complete his 75th lap within the hour time limit. Sabbe is not entered in this year’s race in Tennessee, but Geerts is expected there.

The 2019 champion, Maggie Guterl, echoed Dauwalter’s sentiments on Thursday, “I am so excited to return to the Backyard for my fourth year. I am hoping we finally have the group to push past the 100-hour mark. I see this not as a competition to beat each other, but as a team effort to break what seems like an impossible barrier.” Part of the beauty of the last person standing events is that there must be at minimum two runners left for the event to keep rolling on—teamwork at its finest in a sport that is often considered a very solo endeavor.

2018 Champion Joahn Steene of Stockholm, Sweden will be on the start line, as well as the third-place finisher from 2019, Dave Proctor of Okotoks, Alberta, Canada.

“That’s the thing about the backyard. If you can do one lap, you’re good enough. If you want to compete, the only way to do it, is to do it,” Cantrell slid in before the call dropped and he went back to hammering in tent stakes for what’s shaping up to be the longest last person standing event in the short history of the ultra sub-discipline.

Also on the North American race calendar this weekend are the Last Dot Standing and 24/48 Hour Races in Belleville, Wisconsin, starting Friday, 10/15, The Big 50k in Pine Mountain, Georgia kicking off on Saturday, 10/16, the PCT 50 miler held in the Cleveland National Forest east of San Diego, California, and the 10th Annual G.O.A.T.z Trail Runs (50 miler/50k) on Sunday, 10/17 in Omaha, Nebraska. The Euchre Bar Massacre 50 Miler, in Foresthill, California, touted to have “a good amount of bushwhacking and route finding thrown in for good measure” is also slated for Saturday and Max King is on the start list.

What’s Up in Ultra in your neighborhood this weekend that we should know about? Drop a note in the comments below, let us know what we missed, and what’s lighting your fall ultra fire.

Pure genius, only Gary Cantrell could find a way to make multiday runs popular, well-sponsored, and impossible to handicap. One is in awe.

Genius indeed! Looking forward to the live stream and watching it all go down.

Will it be the faves, like Guterl & Steene? Or redemption for Proctor after the trans-Canada FKT attempt? Or another Will Hayward-type to put the cat amongst the pidgeons?

Courtney & Maggie seem to be running together at a moderate pace, which seems a great strategy.

From an “inside” perspective, you look for consistency of course, but particularly a flat pace curve (no recent decrease in pace, no previous fast laps); teamwork or alliances becomes a factor; earlier motivation may favor a (relative) specialist like Guterl over an all-rounder like Wardian; record territory may favor the big-engined, experienced Wardian (Dauwalter sharing some characteristics of both). The others I don’t know well, but Japanese runners traditionally have a Buddhist ethic of spiritual strength, certainly appropriate!

Another number they give out is the slowest loop, very informative. Many just now had heir slowest loop, Hour 31. Others have never cut it close yet, all loops in plenty of time; this shows great skill & discipline.

Tateno-san the 50-year-old Japanese, what discipline, only 9 minutes between fastest and slowest loops. It is very difficult to do this for 133 miles.

Looking ahead, Night #2 should be a bloodbath, most bets are off after that, in my opinion.

Looking up their resumes, it’s a diverse group. Some globe-trotting pros; others never did multidays until they tried backyard. Wow!

Down to five, all serious contenders. Motivation can be to snag a sponsor & fame, or just the thrill of personal combat, or anything in between!

Besides the huge numbers, we are seeing a level of professionalism, a calm execution of the game plan, that speaks well of them.

This race reminds me of the conclusion of “California Story.” He asks why we never know when Love begins, but we always know when it ends.

What a stellar ‘weekend’ of racing Jesse! Thanks for following along.