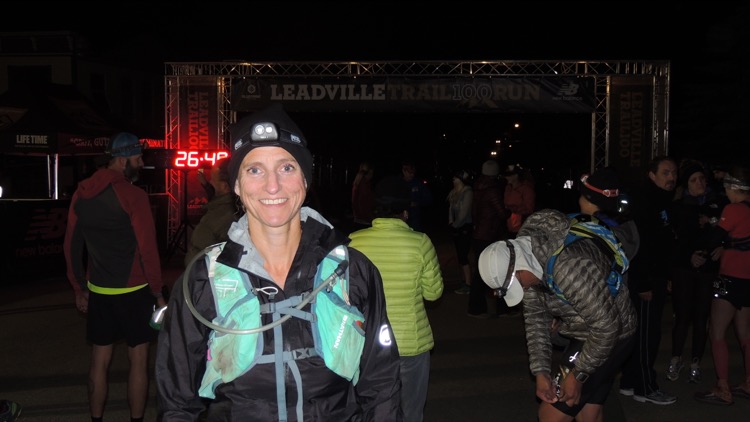 What DNF Means to Me

Did Not Finish: we all know that “DNF” in place of a final time means that we started a race and, for whatever reason, did not cross the finish line. Maybe it’s an injury, maybe a severe gastrointestinal issue. Perhaps it’s a missed cutoff time. Sometimes it’s a voluntary, considered and rational decision, when the pain or time or risk of continuing are determined to outweigh the value of a buckle. Sometimes a DNF is chosen, deemed preferable to a disappointing race time or not achieving a place on a podium. But no matter what causes the dreaded acronym to show up in a runner’s race history, those three letters tend to carry enormous weight and complex implications far beyond their literal meaning. At least they did for me.

My first DNF appeared after my name in the results of the 2016 Leadville 100. For a while, grappling with this onerous label seemed as difficult as running the race. This was not a voluntary decision to drop out of the race: I missed the cutoff time at the top of Hope Pass and I was out, even though I felt fine and wanted to keep going. At first, before I even made my way off the course, DNF had one overriding, devastating, loud, screaming meaning to me: failure. I failed. I did not accomplish what I set out to do. And “I failed” immediately morphed into “I’m a failure,” and spiraled downward from there.

As I trudged back down the mountain to the aid station to have my wristband cutoff, contemplating the magnitude of my failure, I became deeply, abjectly apologetic. Not only am I a giant loser, but I let everyone down, and I’m sorry. I spent all this time and energy and money preparing for this race, and I dragged my kids—and even my dog—on a lengthy road trip and made them get up at 3 in the morning and now I have failed them and I’m so sorry. So sorry. I was really, really sorry. I was the sorriest person in the world. I arrived at the aid station pathetically blubbering apologies and was met with incomprehension. My crew was happy to see me, glad I was okay, proud of how far I had gotten. “What are you sorry about?” they wanted to know. They were somewhat relieved that their crewing duties were over and we could all go sleep in warm beds. They did not feel let down in the least. My sorry-ness, I realized—like everything else about the race—was really about me: I was sorry for myself.

For a while, how to accept and move on from DNF became an all-consuming effort. In every solitary moment I agonized over the DNF and what it means. Why did this happen? Where did I go wrong? Who is to blame for this disaster? What does this failure say about me, as a person? How will I ever accomplish anything ever again? Why? What does it mean? The line between reasonable grieving and wallowing in self pity is not all that fine, but I jumped right over it and didn’t look back. I was one sorry individual.

But it kept coming back to confusion and self pity. Failure. I also wondered why it was so ridiculously hard to get over. Yes, it was a big race, and a big deal that I put an enormous amount of time and effort into, but still, it’s just a race; just a run; just a personal challenge I chose to take on. Voluntarily. For fun. Absolutely nothing was riding on the outcome of this race except my personal experience of the run and whatever I chose to take from it.

So, here’s what I took from it. Almost immediately my primary memories of the race experience were beautiful. I recalled only the energy of aid stations, the spectacular scenery, all the encouragement along the trail, and even the surreal joy of sitting in a lovely alpine meadow surrounded by llamas and gazing out at Leadville way off in the distance, realizing that I had come all the way from there and up this mountain today, on foot. Yes, I was upset to have been pulled from the race, but also giddy and entranced by the magic of the moment. Within a day or two I was already moving from frustration to motivation and determination to go back and try again. I had learned how the aid stations are laid out, what items are likely to be most helpful to me and when, and how a day is altered when it starts at 2:30 a.m. Now I know where my mind might go if I am not careful. Now I know I can do this.

This last lesson was a surprise. I realized that Leadville was possibly the first challenge I had ever undertaken that I was not certain, on some level, that I could do. I have spent most of my life venturing very little, careful not to jump into situations where I might just…fail. I didn’t always do well, or as well as I would have liked, but I generally got whatever it was done, or else I would come up with a very convincing reason why I didn’t. These reasons fell into two categories: I didn’t care, or I didn’t try. Either my reassessment of the goal had led to the conclusion that it was no longer a goal (DNC), or, for whatever reason, I held back a great deal of effort and walked away knowing I could have done better, and therefore still had not actually tested myself (DNT). I had not really risked anything. Maybe I did a half-assed job, but I had not failed. A DNF at the LT100, though—that seemed like failure.

So, in 2017, I again toed the line in Leadville, with better training under my belt and a better-prepared crew, hell-bent on getting over that pass well before the cutoff time. I then made a series of minor but poor decisions; small mistakes that added up to my leaving the Twin Lakes aid station a little late, behind in hydration and feeling a bit off. My focus was 100% on getting over the pass, the 55 miles of the race beyond that barely even on my radar. As I struggled up the mountain I was beset by episodes of dizziness and loss of balance. Even leaning forward on my trekking poles I had a persistent sensation of falling backward. Every step seemed to be in slow motion—actually, every step was in slow motion—and it took me almost three hours to get over the pass and begin tottering down the other side. 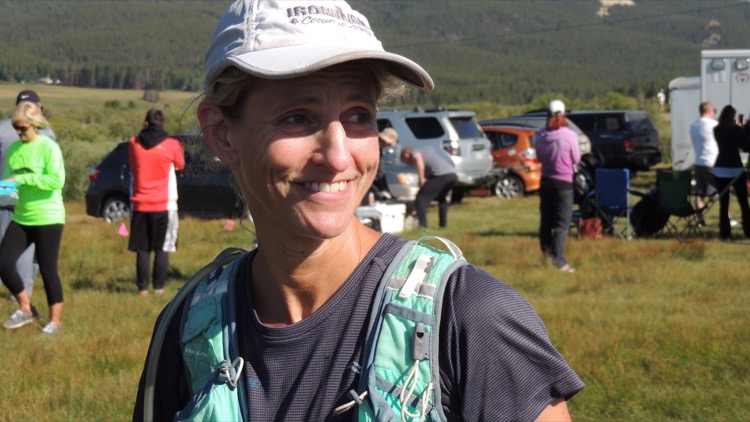 Having accomplished my goal of getting over the pass before the cutoff, my forward momentum temporarily abandoned me and I proceeded down the mountain at a leisurely trot, feeling proud of myself. But then I realized that the 6:00 p.m. Winfield cutoff was fast approaching, possibly faster than I was approaching Winfield. I picked up the pace, annoyed that I had somehow forgotten about the remainder of the race and that I had given up most of the time cushion I had leaving Twin Lakes, also recalling that the course had been lengthened between where I was and Winfield. Sure enough, the trail went on and on—the new addition to the course went right past the sounds from the aid station and continued away from it. When the trail finally looped back towards Winfield, I was in an all-out sprint (such as it was after 50+ miles), but it wasn’t enough; I reached the entrance to the aid station at 6:04. Damn. DNF.

The moment I was officially pulled from the race, I sat down on a cot, flopped onto my back and went to sleep. No agonizing over my enormous failure: the entirety of my emotional response was, “damn.” Someone woke me up to ask if I needed a ride back to Twin Lakes, and I was assisted into the passenger seat of a vehicle with a volunteer driver and three other DNFers. I felt vaguely embarrassed that this was my second Leadville failure, until the guy sitting behind me said this was the sixth time he had missed the cutoff in Winfield. He laughed. And I did not think what a wretched loser he was; I was impressed: six consecutive attempts to do something very difficult that you have deep and personal reason to believe you will not achieve! That is certainly not failure. Before we reached Twin Lakes I was planning next year’s attempt to finish Leadville.

I did not finish, but that is just part of this sport. I Did Not Fail. I will keep trying.

This is a great perspective and something I have finally started to come to terms with after a few years of racing. This year my DNF at mile 43/50 at the Mohican trail race was probably one of my proudest moments because I almost finished something that clearly was too challenging for me for now. Not finishing can be the best motivation.

I loved this!!! I have also struggled the DNF and became that very I’M SORRY person….I am sorry so many of my friends who put their faith in me were let down…and it truly bothered me for the last year. Seeing great runners DNF and hearing stories like this have helped me tremendously. I am now grateful for the courage to begin my race, and grateful for every mile I do get completed. Thank you
Kim

This was great to read. Thank you. I identified strongly with that “I’m so sorry” sentiment, feeling that I had let everyone around me down after an Ironman DNF. But now, after reading this, I’m comfortable again with the literal meaning of DNF, because I’m not finished, it’s DNF, not WNF, and I will finish.

Dude, I needed to read this. I have been reeling for the last week second guessing my first DNF at mile 65 of the Vermont 100 after 19 hours of running. This was my third attempt, I finished it the first two times. This time I tried to run it solo and it did not work out so well, by mile 30 I was ready to quit, confused as to why I should continue, a feeling I have never had before. Luckily, a friend of a friend convinced me to continue and try to get a finish, I ran 35 more miles, but then just ran out of time. I didn’t miss a cut off but decided that I would and so it wasn’t worth continuing. I was probably right, but each morning I wake up doing the math and wondering if I could have pulled it off.

This article is so helpful.

Perfect timing – I just DNF’d at Never Summer 100k this weekend, a race with difficulty rivaled only by its beauty. I didn’t make the cutoff at mile 23, though was allowed to continue on unofficially to mile 29. This is not my first DNF, and may not be my last, but I have worked hard to re-frame. I got to spend 5 days in the mountain glory of northern CO, saw natural wonders along the course that I’ll never forget, and am taking away more good than bad from the overall. Am I disappointed at the result? Sure. But it also reminds me why we do this trail/ultra thing: only in part for some triumph or buckle, but even more for our love of the outdoors, spending time enjoying the company of like-minded others, challenging ourselves, and reveling in the natural beauty of the landscape. Gotta remember what’s important, what’s the root priority here. Determined Not to Forget.