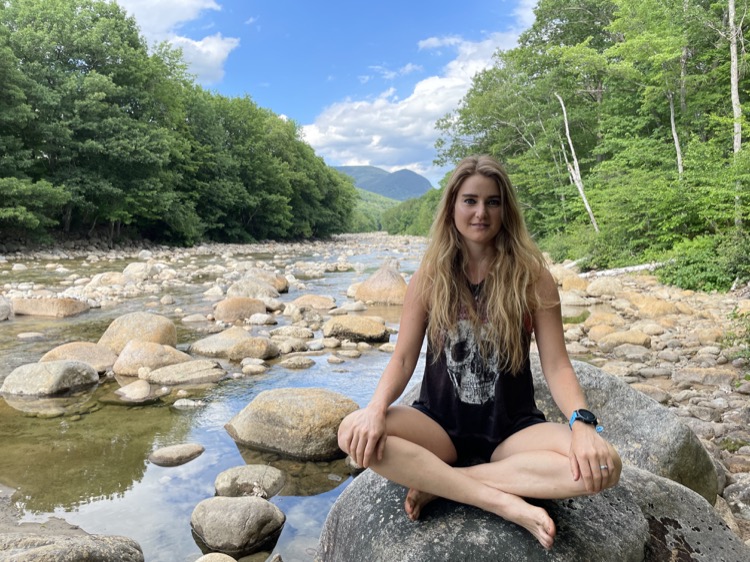 Veronica Leeds: Training for a Win at Eastern States

It was three weeks till Eastern States, and in the heart of the White Mountains, the mornings start like something out of a movie. Under a cloudless sky and the majesty of Carter Notch, Veronica Leeds set out to run the Hut Traverse – 50 iconic miles, 15,000 feet of climb, unpredictable conditions and rocky, technical terrain. It was the perfect prep for the Eastern States 100—or so she thought.

When night fell, she stopped at Galehead Hut, ate jerky and “shot the shit with some guys drinking whiskey.” Then, using her headlamp, she pressed further toward the final peak. As she came out from the tree line, she spotted it: the dark silhouette of Lafayette Mountain, towering high up into the inky night sky. Exposed, the terrain was like stepping onto a lunar landscape: bare, lonely and unwelcoming. The wind shifted with a vague sense of foreboding, and she reminded herself: you can’t DNF in the mountains. Then she started up toward the top.

In running shorts, a t-shirt and a breathable shell, she had little defense against the wind. It rose in bursts and lashed at her legs. She hid behind cairns (human-made piles of rocks) like a soldier sheltering from an onslaught. When the wind lulled, she bolted from cairn to cairn. But having been out for 21 hours, she was freezing, shivering and losing it. She usually doesn’t have “What the hell am I doing out here?” moments, but she was now. Overwhelmed, tears came heavy, full of anguish and fear; she just wanted it to be over. 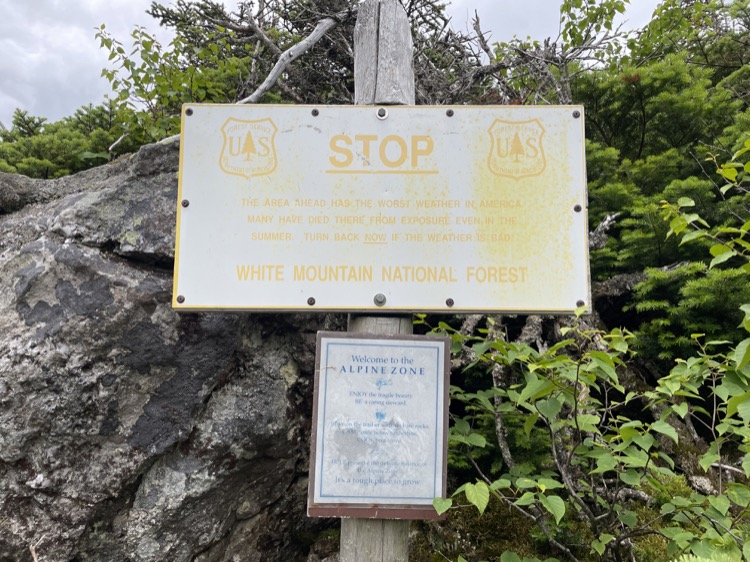 At 1 a.m. in the morning, hiding behind a cairn, she reached for her cell and called her husband, Gene. “It sounded like she was in a tornado,” he said. Gene has a calm voice. In fact, the more intense situations get, the calmer Gene becomes. Last winter, he had gotten a similar call from Veronica when she was doing the Presidential Traverse—a notorious stretch in the White Mountains that crosses 10 peaks named after U.S. Presidents, seven over 5,000 feet. A Forest Service sign at the trailhead reads, “Stop. The area ahead has the worst weather in America. Many have died there from exposure even in the summer.” But even that didn’t compare to what was happening to her on the Hut Traverse. It was the first time she’d found the edge of herself since Eastern States.

In 2019, she was new to ultras and curious about how many were on the Eastern States’ wait list. So, she signed up to see, and got in. The 20,000 feet of vert and heat knuckled her into submission—walking, diarrhea, crying and ITB pain. Her last mile into the Algerine aid station took 48 minutes and resulted in a DNF. Since then, she has been in the top 10 at every ultra she’s run and won her last three. With an eye on revenge, the 33-year-old from Cross River, New York, has been spending the summer in “the Whites.” She fell in love with the New Hampshire mountains during the pandemic, sleeping in her car, eating peanut butter out of the jar, listening to Pink Floyd and Bowie and of course, running trails. She has put in over 400,000 feet of vert so far this year and won the notoriously gnarly Manitou’s Revenge 54-miler. 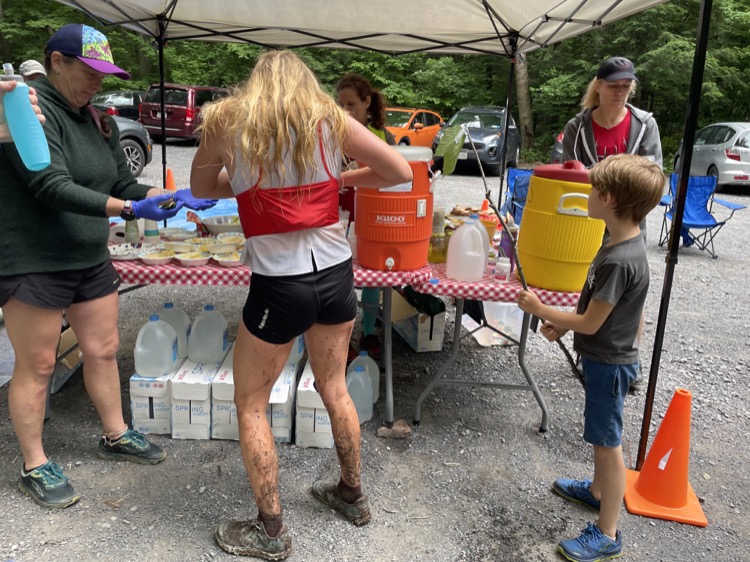 Veronica at an aid station on the way to her Manitou’s Revenge win. Photo: Gene Leeds

Now exhausted, frozen and thawed, she cuts the last mile and a half of the Hut Traverse with a tinge of self-hatred. She doubts her strategy with only three weeks until the big race. “I set out to have the classic confidence-boosting last big effort,” said Veronica, “and instead I tripped into the well.” Gene sees it differently. “I used to be nervous that she’d break herself,” he said. “Now, I truly believe that she’s invincible.”

Seven years ago, Veronica was 26, and like many young adults, hadn’t gotten her shit together. A general studies major at Columbia, she was adrift, unsure of the future. She sought self-exploration in classical Tibetan translation and sutras and meditation. Then came marriage and a baby. She chose to have a homebirth and refused medication. After 52 hours of labor, she gave birth to a son, Vlad.

“No one can prepare anyone for being a parent,” she said. Veronica realized (though she already knew) she was not cut out to be Joanna Gaines. Each day looked the same. There was no movement. Life had become somehow animalistic, sitting and breastfeeding day after day. She quickly fell into a funk. “I was miserable, and miserable at my misery, because it seemed like other women were delighted to stay home and make felt cutouts of Elmo.” She had to move. She found a half marathon and entered. It hurt like it should, and she loved it.

Gene, a runner himself, became more of a caretaker, crewing Veronica in every race. He brings her soup, helps with spreadsheets, course maps and most importantly, keeps her calm. “When things get scary, I tend to get logical, focused.”

In a previous life, Veronica was an equestrian showjumper. Ambitious, she wanted to go to the Olympics. Every weekend was a horse show. Hours and hours of training every day. She washed them, dried them and fed them. In the horse world, DNFs are common. You have to protect the horse at all costs. You never run a with an injured body. And early on, Veronica took that into her running, “Pulling up is not something to be ashamed of,” she said.

In 2018, at the Jay Peak 50K, she ran straight into a pipe used to carry water up the mountain to snowmakers. She passed out from the blow. When she came to, she reacted like a well-schooled footballer, “I’m fine,” she said, trying to shake it off. But she had a broken nose, along with a few chipped teeth. 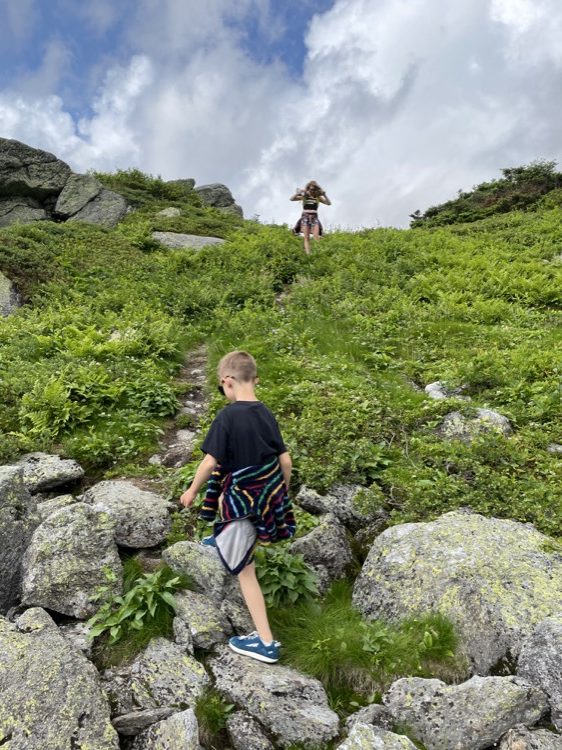 Her next DNF was her first 50-miler, the Stone Cat 50 in Ipswich, MA. The rocky, rooted course was slick from a downpour and a steady rain had settled in. She realized she didn’t have a raincoat for her son and that her favorite restaurant, Life Alive, was just 30 miles away. “I just didn’t want to be there. Some situations you gut it out, but it’s also okay to call it. This shit is so extreme.”

But so is Veronica. And she’s more maniacal about finishes than when she began. She doesn’t just want to finish Eastern States, she wants to win Eastern States. Her room is full of running books, and when she isn’t running, she’s biking, hiking or working with her coach. “She’s still intense but less so,” Gene said, despite the fact that Veronica boils herself in the tub after every run. She’s heat training for Eastern States. The summer in New Hampshire won’t be the same as summer in Pennsylvania. “She sits in there for 30 minutes,” said Gene. “Sometimes, she gets dizzy and just shakes.”

According to Runsignup.com: “Eastern States 100 is 103 rocky miles with +20,000 feet of elevation gain and a finisher rate of about 49%. Welcome to Pennsylvania!”

It’s race day, and Veronica heads into the first climb strong. The first two hours, everything goes to plan, but then the first unknown appears: Nicole Yokum. The 38-year-old has won 14 races in the last two years. Halfway through, Veronica knows, barring some drastic change, she isn’t going to win. Yokum went on to break the course record, finishing second overall in a blistering 24:34:14. “She had a different level of fitness,” Veronica admits. She had been certain she could win. But she regrouped, “I was like, okay, move on, continue to work and you’ll be third or fourth, and that seemed entirely doable.”

Then, the second unknown grew into a nightmare by the 100k mark. She had started to chafe around mile 10 and was dabbing on Vaseline. But the humidity was unrelenting. Veronica had been pouring water over herself and running with ice in her clothes. That combined with the humidity and her chafing situation turned to torture. “It felt like a flamethrower on my crotch. Raised, fluid-filled welts. Gross and painful.”

Medicated diaper cream at some of the aid stations had helped. But the relief was temporary. She was reduced to a truncated gait with her legs far apart, and it soon became clear that she was in survival mode. “I asked the crew to transition to ‘Bitches vacay,’” which is her and her friend Amy Hanlon’s code word for, “Let’s just have a good time.” Amy paced her for the last 19 hours. “It was the best part of the whole experience,” Veronica says. Her race had shifted and with that, came perspective, “I felt overwhelmed with the unlikely good fortune that the closest friend I have ever had is able to do that on a drop of a hat, and that she would want to.” 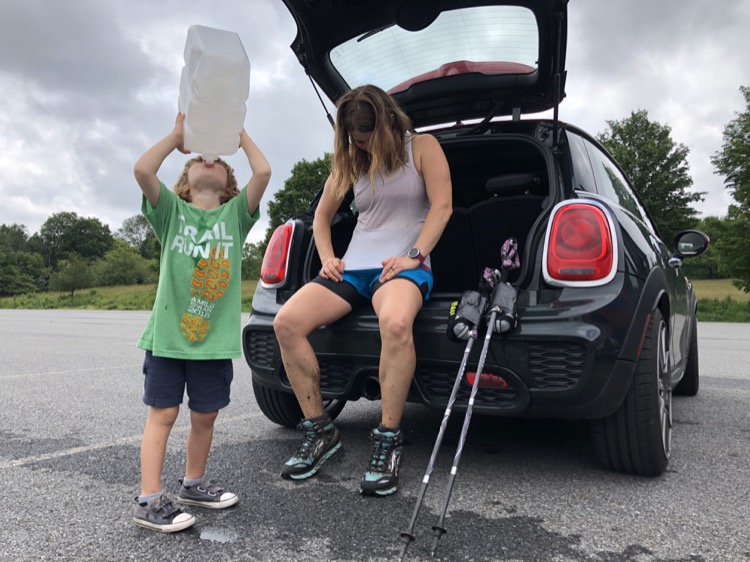 Veronica’s results were not what she wanted and not what she’d slaved for. Still, she had her revenge. Not only did she not DNF, she was the sixth female across the finish line. Peeter Muursepp, her training partner and pacer was there in 2019 and again this year. “I’m in awe to see how she has transformed,” he said, “from someone who had dabbled in ultrarunning and had some DNFs to someone so strong.”

As for the future, Veronica’s not sure exactly where she is on her journey. “Part of me feels like screw this, I am not a 100-mile runner yet,” she wrote in her journal. “I should focus on crushing the kind of stuff I love: mountainous, technical routes/races up to 100k. And part of me is like, listen, you are right on the cusp of getting it.”

Given her past and her personality and drive, the tea leaves aren’t hard for her friends to read. After volunteering for a backyard ultra the Friday after Eastern States, she’ll head back to New Hampshire and the White Mountains. “Some guys in the Whites are doing a gnarly, delicious 100-mile section of the AT,” she says. “And I feel like it might be exactly what the doctor ordered.”

Eastern States is beautiful. There are many runnable sectiona there. The climbs are not short though.

Veronica, you are amazing! It was such a pleasure to meet you on the ES course. Your words of encouragement were a huge motivator for my 104 mi journey that weekend! See you on the trails

Few spin a yarn like our Jared. I feel like I know the runner and the race better.

What a great piece of writing!

So proud of you ❤️

Trail beasts-that’s what we are🙂

Veronica, I smashed my forehead on that same pipe at Jay Peak and think it made my head permanently lopsided. (think we exchanged some words at one Jay 50K too) Seems like that just made you stronger. So awesome to see someone seeking out the steepest and most technical terrain the Beast Coast has to offer, lots of great stuff ahead for ya!