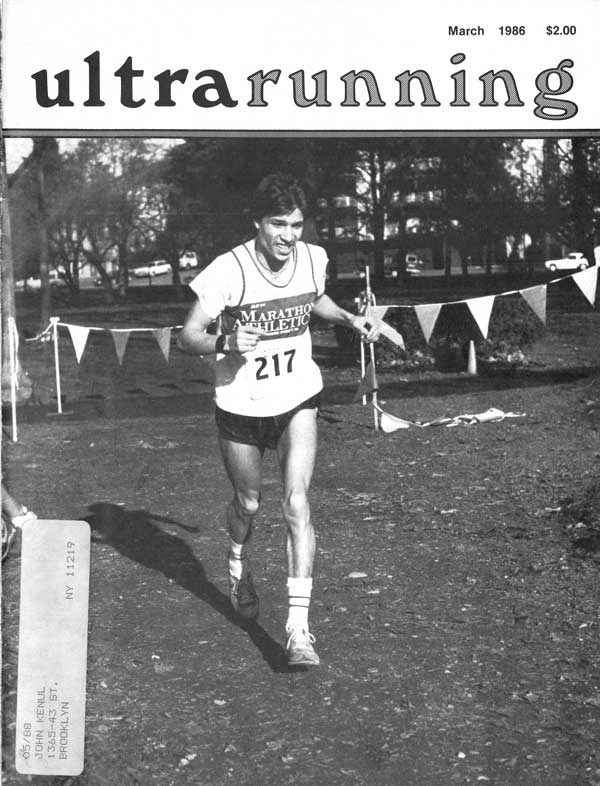 The noun “verity” is described by Webster as “the quality or state of being true or real.” A recent letter to Ultrarunning (Jan/Feb ’86) identified handicapping ultras as an idea worth considering. Most runners believe the results of any race should have truth and reality in their final outcome, especially handicapped races. To just give age and sex handicapping is unfair. There are additional factors to take into account. The Variable Environmental Results Indicating True Yield (VERITY) handicapping system has been built around these factors and it should be considered by race directors. The VERITY system for shorter races was developed by Tim Hart, a runner friend and pacer at Western States. It can easily be applied to ultras and can give new credibility to many events. The time has come to begin handicapping ultras.

The typical handicapping system starts, and ends, with allowances based on age and sex. Most runs would start the runners at time intervals based on the distance or time length of the event. Time allowances would be used for trail runs, maybe ten minutes for each five year age spread category. Track runs would give this allowance in miles, perhaps two miles per category. Women runners would get an additional 20% of either allowance.

The VERITY system builds on this basic handicapping arrangement. VERITY requires two sets of adjustments, one for trail runs and the other for track runs.

These basic adjustments are expanded or reduced dependent on the runner’s pace.

Trail Races require some unique adjustments. For a middle-of-the-pack runner in a trail 50 miler there is an assortment of conditions to be faced. As the day progresses, there is an increase in the surface temperature as the sun rises 5 to 8 degrees every 15 minutes. Reduced shade becomes a factor as the sun rises, for as its angle in the sky gets closer to that of various objects (such as trees) protruding from the earth’s surface, the area covered by shade cast by those objects is lessened, which increases the distance that runners must run in direct sunlight. Oxygen and breeze reductions happen as advance runners pass through canyons and use up an exorbitant amount of oxygen in the same places where the breezes become non-existant in the afternoon. Increased trail dust from the faster runners makes the density of the gaseous atmosphere left behind unsuitable for human breathing. Consider also the odor left behind by the sweat-soaked bodies, also reducing the breathability of the air and raising the humidity of the air to a point where it is just short of being declared a hazard by the EPA. And lastly, as the dust rises from the trail and with various rocks turned over by the advance runners, new and treacherous obstacles surface for later runners to navigate.

So time adjustments are clearly needed. For a middle-of-the-pack runner in a 50 mile trail run they are as follows:

A track run requires a different set of adjustments. For the same middle-of-the-pack runner there is increased boredom (the adjustment could be reduced if the runner wears a Walkman) and diminished breeze due to the slower pace. Additional steps are required because of the shorter stride length, requiring greater effort. The runner must also suffer increased humility as he/she is lapped time and time again by the faster runners.

Adjustments here are made in miles. For a middle-of-the-pack runner in a 24 hour run they would be:

Events of various other lengths, both shorter and longer, on either trail or track, may be administered under the VERITY system by adding or subtracting from the above values. A 100 mile trail run would double the adjustments listed for a 50 mile trail run, for example.

With a little calculation, race directors can determine the needed VERITY adjustments for pace and sex. Pace adjustments would be based on previous times, submitted by the runners on their entry forms, and would be some percentage of those given in the examples above. Women would receive an extra 20% of the pace total added onto their adjustments. As an example, a woman middle-of-the-pack runner in the above 24 hour run would get the 12 miles plus 2.4 additional miles for a total adjustment of 14.4 miles.

Remember that the VERITY adjustments are in addition to the normal age and sex adjustments.

To implement the whole package, first establish the allowances made for age and sex staggered start times. These are easily identified with code letters on the runners’ bibs. The second phase (VERITY) requires runners to post previous times for marathon or ultra events. These times will aid the race director in determining handicap pace, and (for women only) the sex percentage adjustment and they should be posted at the finished line for the final results tally.

Note that some environmental factors do not warrant adjustments, such as the inconvenience and effort required trying to keep the beer cold for the slower runner.

In our two results above, we would end up with the following for a 35-year-old middle-of-the-pack male runner:

As you can see, with the inclusion of VERITY in the handicapping of ultras, race results could vary substantially. An 8 hour 50 mile finisher becomes almost a 7 hour finisher. The 24 runner may now get to the goal of 100 miles. The finish positions are much tighter, the overall results much more competitive and, in turn, more rewarding for the average runner. All it takes is a little creativity, a willing race director, a sharp pencil, calculator, age charts, well … maybe on second thought ….