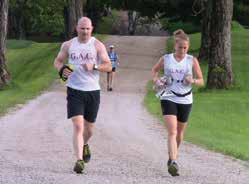 It’s the Big Bang in the ultrarunning world, as more runners conquer the marathon distance and trade up to ultras. Ultramarathon finishes have increased almost 400% in five years.

With so many first-time ultrarunners, there are likewise more first-time pacers and crew. The request of a new ultrarunner for a crew often falls on the innocently willing shoulders of friends or family who may have little experience in ultras. The task of the crew can become surprisingly critical in some races. With careful planning, first-timers can do a stellar job.

Ultramarathons come in sizes from 31 miles all the way up to 3,100 miles. (Yes, really. The Self-Transcendence 5000K in New York.) As a first-time pacer or crew member you are probably preparing to help your runner through a 100-miler or other overnight event, since support is not needed for a 50K. Even most 50-milers do not necessitate a crew, though a pacer can be helpful when the race organization allows it.

Crewing refers to managing the runner’s supplies of fuel, fluids, first aid, fresh clothing: getting the runner what they need, when they need it. Your job as crew may be facilitated by dropbags, a service the race may provide of transporting pre-packed bags of the runner’s own supplies to predetermined locations on the course.

Pacing refers to running with your runner, providing encouragement, data feedback and pace support. Ultramarathons normally have a point late in the race after which it is permissible to have a pacer. The first task for a newbie pacer is to be supremely trained at that distance. If you’re joining your runner at mile 80 in a 100 mile race, you should be extremely comfortable running 20 miles. You need to be able to anticipate the needs of your runner, who may not be thinking clearly by that point. If you encounter fatigue or injury issues of your own, you will be useless, or even a liability, to your runner.

Train your pacing distance until you can laugh at it, do algebra problems through it, skip and dance it. But remember, unless the race you’re helping at specifically allows “muling” – the Leadville 100, for example – you’re not allowed to carry any supplies for your runner while you are pacing them.

The Golden Rule of Ultra Crewing is: BE POSITIVE, even if it requires gilding the truth. Your runner already knows how bad they feel; they don’t need it confirmed. The “Be Positive” rule cannot be overruled; it always applies. How many different ways can you say, “You’re doing great”? Assuming your runner is well-prepared, an unrelenting positive attitude is not unfounded or false.

You may act as a mobile data feed for your runner. As you relay pace data, mileage, terrain forecasts, fluid input/output and the status of any particular rivals, even these objective facts should be conveyed with a positive spin. Or you may be an entertainer.

“You’re their radio,” “says Sunny Blende, veteran pacer of several dozen ultramarathons. Have some stories, jokes, poems or songs ready. This is where it helps to know your runner beforehand. One runner I paced loved my recitation of Psalms from memory; another might have ditched me in the first convenient gully for that. Stay attuned to your runner, and be aware that their needs and moods may change. Many times. Chatter may be irksome at twilight, but very welcome deep in the night, or vice versa.

Ultramarathon veteran David Elsbernd looks for an easygoing manner from his pacer, someone who can push him towards his goal without shoving. Runners in general, and ultrarunners in particular, tend to be an independent breed, and don’t usually respond well to a heavy hand.

Texas ultrarunner Rochelle Frazeur tells the story of how gentle, but firm coaching helped her through her first ultra. At mile 82 of her first 100-mile race, when she was exhausted and ready to quit, she and her pacer had this conversation:

That exchange was enough to get her forward to mile 93, where morning broke and Rochelle got new juice from the sunrise. Frazeur said that a more forceful attitude from her pacer would have caused an emotional backlash; a less definite one would have allowed her to quit and miss the experience.

In the “dog hours” of an ultra, the runner is likely to experience doubt, or even despair. The question “Why am I doing this?” should be expected. Those times are when the pacer and crew can work their magic, helping the runner to resist fatigue and take small steps towards the goal.

Blende advises breaking things up into manageable bites. Say your runner talks about quitting. The pacer can say, “all right, we’ll need to walk up to the next aid station to get a ride in.” Blende has found that by the time the runner reaches the next aid station, they will have found some untapped resources and will be ready to continue. If not, the pacer can coax them along mile by mile, making deals with the runner –

“Your drop bag is ahead three miles. Let’s go get it” – until the runner’s reserves kick in. Every ultrarunner wants to finish. A burning desire is what made them sign up for this crazy adventure in the first place. While the runner may lose touch with their initial desire sometime in the middle of the night, the pacer holds that desire like a torch. Whatever you can concoct to keep the runner making relentless forward progress is a service to your runner.

If general fatigue progresses to severe disorientation or dehydration or if your runner suffers a serious injury, alert a forward aid station via a passing runner. Some runners are reluctant to seek medical care, so you may have to bargain with them. “If you let the medics examine your feet/restore your fluids, you’ll be back on the trail in no time, feeling better than ever.” A disoriented or severely exhausted runner is not always long on reason.

Don’t expect your runner to be his or her ordinary self in the late stages of an ultra. A normally stoic person may dissolve in tears; a usually placid person may erupt in temper. Longer races break down the ordinary defenses in a personality, which is both the appeal and the onus of ultra distances. Like entering combat, a runner doesn’t know for sure what’s down deepest inside until circumstances strip down the personality to its bones. Israeli ultrarunner Elad Benjamin said, at the conclusion of a particularly grueling Badwater ultra, “I peeled off another internal layer and got to know myself and my limits a little better. At the end of the day, that’s what makes ultras an enriching experience and one that I keep coming back to.”

Be For The Runner

While crewing or pacing, you have the rare opportunity to forget your own agenda, and be all about your runner. Picture yourself packing up your own judgments and priorities in a box that you won’t see again until your runner reaches the finish. When a runner takes on a pacer, trust is invested. The runner is putting their well-being into your hands. Once the race is in motion, it’s too late for the runner to shift back.

Ultrarunner Melissa Berman recalls one race when she told her pacer beforehand that she tended to get altitude sickness. Once she planted that information with her pacer, she promptly forgot all about it. As the nighttime mountain race wore on, Berman began to feel queasy. Her race-fogged brain was completely unaware that she was at altitude. The pacer didn’t remind her that she was just experiencing normal altitude reaction, and Berman worried her way through the entire night, convinced that something much more serious was wrong.

One highly experienced ultrarunner tells of a pacer who left her in the late stages of a race, convinced that she was on-pace and didn’t need help. But even though the runner was doing very well, she had developed a childlike dependence on her pacer due to exhaustion. By that point in the race, she couldn’t access her “solo game” and she suffered an emotional bonk when her pacer peeled off, affecting her finish time significantly.

Think long and hard before you agree to pace a spouse. You care more about the runner than anyone else (assuming the runner’s mother hasn’t volunteered) so you’re a natural. But you’re going to have a harder time watching equably while your spouse retches at the side of the trail; unveils raw, bloody feet; stumbles drunkenly on the smallest of pebbles, and reports visions in the night, all common experiences in an over night ultra.

Berman, who has been paced twice by her husband advises, “Your spouse will be their usual self, only more so.” Take hard stock of your personal qualities, and decide if those qualities, magnified, will help or hinder your spouse in pursuit of their goal.

Crewing an ultra, especially an overnight or multi-day, requires organized planning. This is where an obsessive/compulsive personality becomes an asset. The pacer/crew need to know where everything is located, in which dropbag at which aid station, and in which box in which car. Don’t depend on the race organization to supply your needs; ultras are for independent runners. Be prepared.

Blende has a standard “bento box” that she prepares for every pacing assignment.

It is laid out exactly the same every time so that supplies are easy to locate… all the gels in one place, all the foot supplies in another, first aid in one area, electrolytes in another. Find out which brands your runner prefers.

It doesn’t hurt to have a surprise or two packed, when space allows. Many runners crave something totally unexpected in the latter parts of a race. Someone who would never choose a sugary fuel under normal circumstances may crave Coca-Cola or Red Bull at mile 70; conversely, a sugar hound may find sugar nauseating at that point.

Before each aid station, anticipate what your runner may need. If pacers are allowed to enter an aid station ahead of their runner (read the rules ahead of time), Blende sprints ahead as they approach aid stations, so that the runner’s bottles are filled and necessary items from the dropbag are already retrieved before the runner pulls in.

If race officials or Search/Rescue personnel are tracking runner numbers, be certain that your runner has been checked in. You can call their number as you approach, “Runner 185, needs water and PB&J.” Know before you go which aid stations will have an official check-in.

Study course maps and elevation profiles ahead of time. If you can’t personally visit the course, take a virtual tour online at the race website or on Google Earth. Be familiar with the system of trail markings being used. Your runner will have studied the course, too, but you are their engineer if they get confused or fatigued.

The general rule for pacing is to run behind the runner during the day, so that they are setting the pace, and ahead of them at night, so that you can light their path. Check with your runner for their preference and be sure to conform to any rules a particular race may have.

Crewing or pacing a runner to a successful finish is a profoundly satisfying experience, like directing an Oscar-winning actor. You get to participate in another person’s dream, sometimes contributing to it significantly. Life becomes blissfully simple when the only things in the universe are a runner, a trail and a finish line.

Sound off! Is there any tips or advice you have for first time ultra pacers? In a race, what do you want most from your pacer or crew?

Great article! Now I just have to find a pacer who fits the bill.

This was the most brilliant article. Thank you.