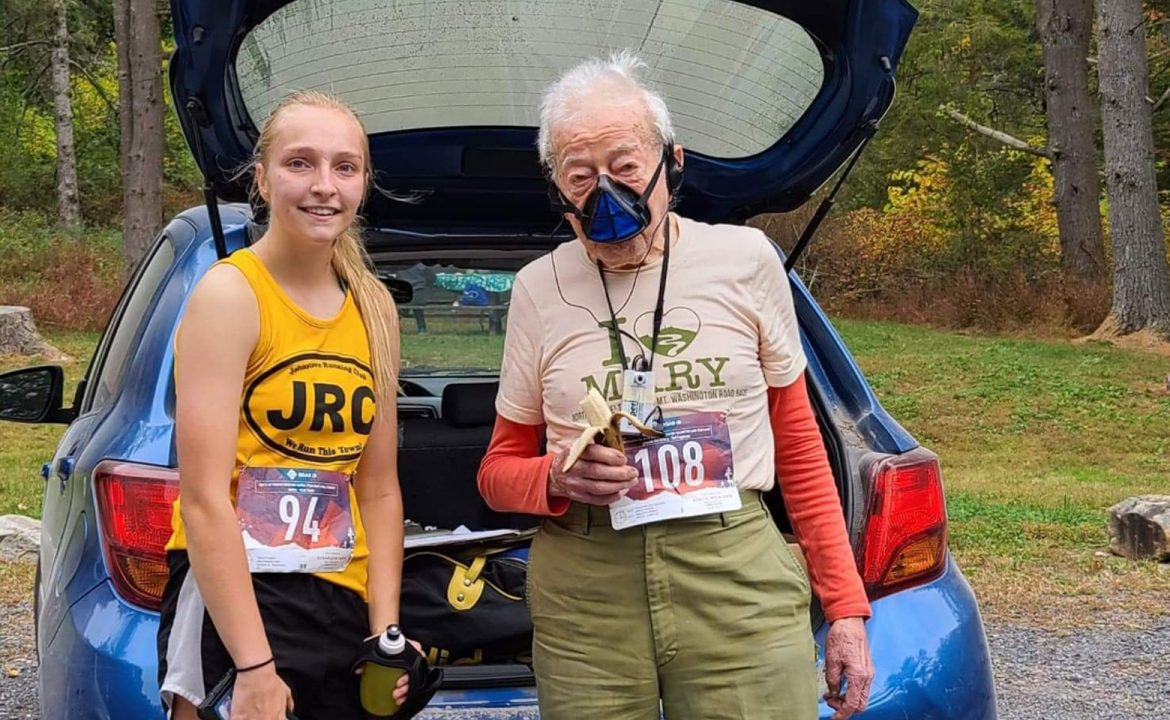 If the coronavirus pandemic has taught runners anything—besides masking, social distancing and handwashing—it’s that we still need to race. Training dutifully, even with appreciating the scenery, feeling good, getting the blood moving and clearing the mind, just isn’t enough for many of us.

Assessing the details for making the Tussey Mountainback 50 Miler happen during a worldwide health calamity meant revisiting now-familiar logistics. Masking and distancing were required. Ultrarunners were welcome, but for the team relay event, hopping into a van with assorted running buddies was not in the cards, so only single-household family teams took part. Husband-wife duos triumphed.

If age ranged extremely, there was unity in an unfettered zeal for kicking it in the outdoors. That was the story for George and Kaylee.

On the elder side, George Etzweiler, 100 years young, from State College, PA, has set world records at the Mt. Washington Road Race and captained a relay team of eight runners 65 or older at the Mountainback for 14 consecutive years. A retired engineering professor from nearby Penn State, George recruits from the local running contingent of seniors with the aim of achieving the highest possible average age. And he plots out the elevation gain and distance on each of the course’s 12 segments to estimate the time for each runner’s effort. And he drives his own car.

Youth predictably brings vigor, but Kaylee Frederick, 15, from Johnstown, PA, evokes the unassuming, matter-of-fact approach of a high school soccer player—which she is—who’s just been dropped off for a changeup workout. Despite two 50ks and a previous 50-miler under her belt, she knew this course doles ample hills.

Five waves dispatched from the start under cool air as the skies lightened. This year’s race took runners in the original counterclockwise direction on 82% unpaved fire roads with just over a mile of elevation gain in central Pennsylvania’s Rothrock State Forest.

“With competitors broken up in waves, it was impossible to know where I was at relative to everyone else,” recalled eventual winner Brock Butler, “so I set out to hold a steady effort that would put me somewhere in the low 6-hour range. I yo-yo’d with Mark Puleo a bit on the first few ups and downs. He was faster going up and I was faster going down. But by 20 miles I’d separated a bit, probably due to my fast transitions through the rest stops. In hindsight, I was running a bit too fast in the first half of the race. I hit a few downhill miles in 5:40 and that probably took a toll on my legs. The central hill was tough, and I started to feel like I might be in trouble. My time at 25 miles was around 3:02 and I thought that was good because Josh Finger kept telling me ‘I should be sub-6 hours on this course.’ Well, maybe that would be true if I’d been training like I did last year when I ran a 2:25 marathon, but this year’s focus was on much shorter races and I’d been running much fewer miles.”

Around 30 miles, Butler started feeling lightheaded and felt he may need to walk a bit. “I used the opportunity to take in more calories and fluids. This worked, but the second half of the race was a struggle. I never walked, but my pace dropped significantly. It was a constant battle to just keep moving. I kept telling myself that the difference between running slow and walking was huge and that I might still have a chance of placing well if I could keep running. When I got to the last rest stop [mile 46], I was told someone from the second wave was gaining on me quickly. So, I ignored the burning and cramping in my quads/hips and managed to hold sub-7 minute pace down the hills in the final segment. I had no idea the race with Paul Jacobs in wave 4 was so close. He would have beat me if I had spent a little more time at the rest stops or ran more conservatively in the final miles. Fortunately, the extra effort (and pain!) was worth it.” 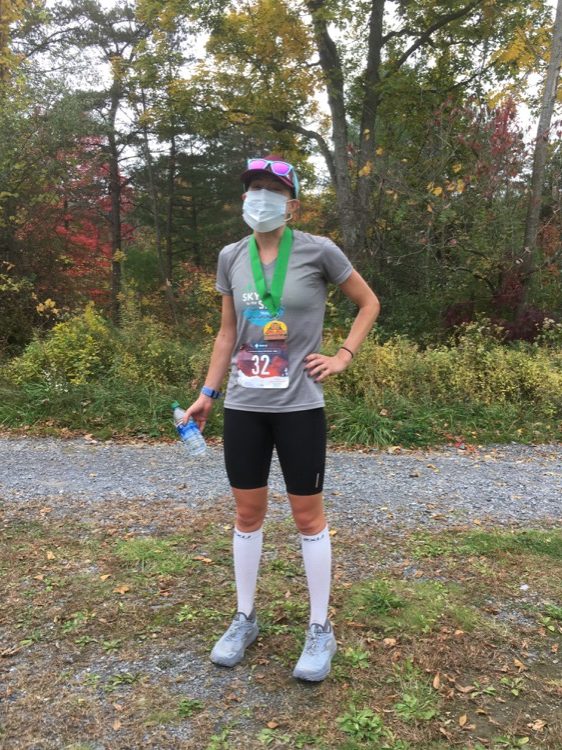 Butler reveled in the scenery. “I love the course. Running through the beautiful forests, over the hills, and into the valleys was a great way to spend the day. The gravel was a little hard to get traction on at times on the uphills, but I enjoyed the soft surface going down. All the volunteers were awesome, and it was nice that crews for other athletes were so supportive of all athletes. Just great people to be around — such an awesome community.”

Women’s winner, Miquela Ingalls, agreed. “The Tussey course is gorgeous. Fall in Rothrock is a dream, and it was really nice to try a race on wide-open gravel roads. I love single track, but without the roots and rocks, it’s a different type of running and you can focus on form.”

Just being able to race was a huge bonus for many. “I’m really grateful to the race directors and volunteers,” said Ingalls, “for making this race happen in the strangest of years for in-person events. I also feel very fortunate to have such an awesome course in my backyard!”

Frederick sprinted the last 100 meters. She appreciated the challenge and camaraderie. “I honestly didn’t have much time to train for this race between school, work, and soccer. I did more mental preparation knowing that it had a 12-hour cap and had a lot of hills. The toughest time for me during the race was miles 20-24 up that hill. That portion took me the longest and I was scared I wasn’t going to finish because of how long it took me. It was like the hill had to end and just kept getting bigger. I did make some great friends. That’s one of my favorite things about running, making such great friends. And it really doesn’t matter who finishes before who, because no matter what time you get, the fact that you’re out there doing it is truly outstanding.”