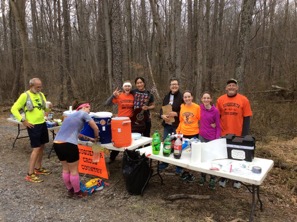 On March 25, 2017, we hosted 57 runners at Big Spring Picnic Area, in far western Perry County, Pennsylvania, to run the Harrisburg Area Road Runners’ Club’s Tuscarora Trails Ultra 50K. This is a free event, but all runners must register in advance and are required to bring a donation for the aid stations.

It was a warm spring morning, with temperatures around 50ºF, but heading into the low 70s by mid-day. The skies were threatening, but leaking only snow flurries on the anxious runners.

The course is about 50/50 trail and forest service roads, with about 4,200 feet of climb, some great trails, good shoe sucking mud and some extraordinary rocks! And this year, measurable snow on the higher mountains.

A new course record was set this year by Jared Hazen, with a time of 4 hours 10 minutes. Jared has placed as high as 3rd at the Western States 100 Mile Endurance Run! Clayton Bouchard ran a 4:29, breaking his old record as well.

But speed is not what this run is about. We have no awards, except for best wildlife photo. We have no first or second places, and most importantly, NO DNFs. Anyone not completing the entire 31 miles is still listed in the results with their approximate distance ran. I refer this distance as a ODR – Other Distance Ran. If you have ever tried running any of my races you would understand. They are difficult – some would just say HARD. And there is no shame in calling it a day if things are not working for you.

Several runners completed their first 50K and are excited to run another one! Several other runners said that after the beating they received, they would never run another 50K. (Yeah, they probably are signing up for one right now!)

I am so fortunate to have extraordinary volunteers, like Rick Knepp, and his group from the Susquenitia High School who run one of the major aid stations; Ron Shields from the Perry County Road Runners, and Jason Campbell, who helped me mark trail.

We had a lot of other volunteers I haven’t mentioned who worked the aid stations, swept the trail, and helped keep runners on course. Thank you all! I cannot forget to recognize and thank the great group of people I work with from the Bureau of Forestry in Blain.

But I didn’t forget the key person on the volunteer list – my wonderful wife, Melanie Halke, who does everything! She helped mark and clear trail, coordinated race day sign-in, checked off runners as they finished, and prepared much of the food for the post-run picnic and ran the kitchen at the finish. Thank you, dear!

So I had another Grand Adventure and I hope everyone else who participated in this event did as well. Thanks for allowing me to share in it with you… Thank you runners!