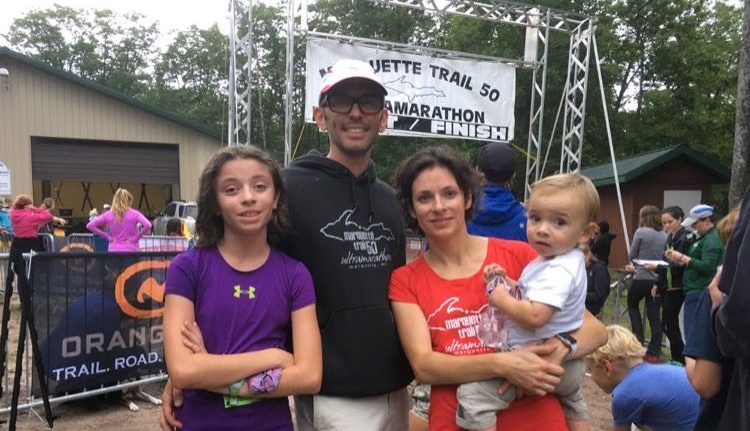 Stephanie and Andrew Grosvenor make the Marquette 50 a family affair.

I will admit it. Every year, the day after the race, I vow that we can’t do it again. The months of planning, the weeks of intense details leading up to “race week,” and then race week itself, with its non-stop planning, organizing, and meeting/greeting. Of course that’s just me. For my husband, Andrew, as much as it is frantic, stressful, and intense, he LOVES it. It’s pretty neat to see your spouse find something they enjoy so much and are good at.

Not to say there haven’t been years he hasn’t been “over it.” I can still remember him coming down the morning after the race a few years ago after he had to call Search & Rescue for the first time. He slumped down at the dining room table and said, “Never again.” Here we are though, seven years later. And he’s had to call them since then, and it’s been ok. I thought two years ago would have done him in for good. What began as a forecast for intermittent sprinkles all day turned into 16 hours of driving, relentless rain. I was shocked when I went out to deliver my usual lunch to volunteers to find everyone still smiling – even him – as he stood in the rain congratulating the finishers. But now I’m getting ahead of myself…

It all began eight years ago, the year after we moved back to the Upper Peninsula of Michigan after eight long years of medical school and residency in “downstate” Michigan. During those eight years, running evolved – from a way to sneak in some exercise between my studying and my husband’s first year of teaching – into so much more. We were fortunate to meet some wonderful people in Grand Rapids, Michigan, who were as friendly as they were good athletes. They were also passionate about sharing the fun of running, and these people were the humble beginnings of the Grand Rapids Marathon. My husband had his first introduction into large-scale running event planning there. At the same time, he and a few friends made the “leap” from marathon running to ultra running. When he heard it described as “eating and drinking contests with some running mixed in,” he was all in.

Fast forward a few years, and we made our way back “home” to the Upper Peninsula. The first month of our return, Andy ran the Marquette Trail 50. It was in its second year at that time, started by local ultra runner and general surgeon Joe Jameson. Still in its infancy, it was a race of only around 40 to 50 runners. With Joe’s full time surgery practice keeping him busy, over the course of the following year he asked Andy  if he would take it on. I don’t quite remember agreeing to this, being a busy surgeon myself!

To describe the first year as rough does not do it justice. My husband used the old course maps, combined with what little current knowledge he had of the trails in the area, plus his memories from biking up here while in college, to put together the course maps. We did not have many solid connections in the community yet, and finding enough volunteers for such a large scale (with respect to the length of the course) event was a huge challenge.

Fortunately, soon after we moved to town, we met up with a group of runners called the “Muffin Runners.” This group of Wednesday morning runners soon became our running family in our new hometown, and without their help and support that first year the race never would have happened. Even so, the logistics of putting on the event that first year were mind-boggling. 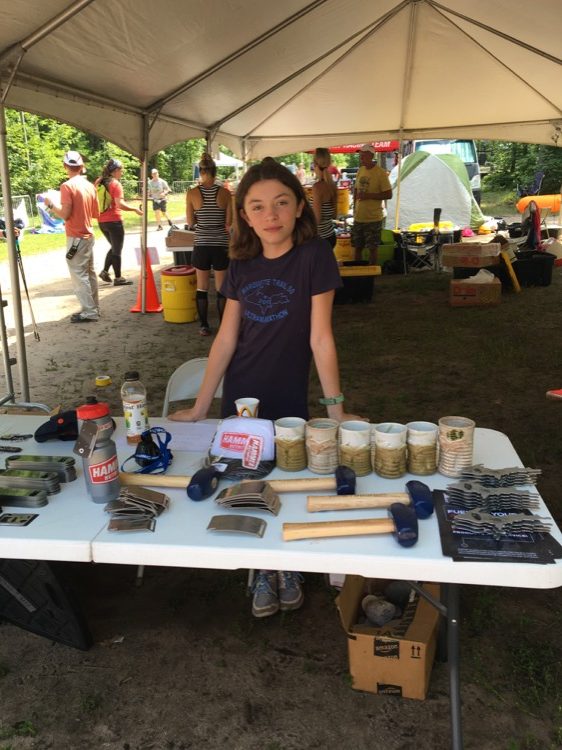 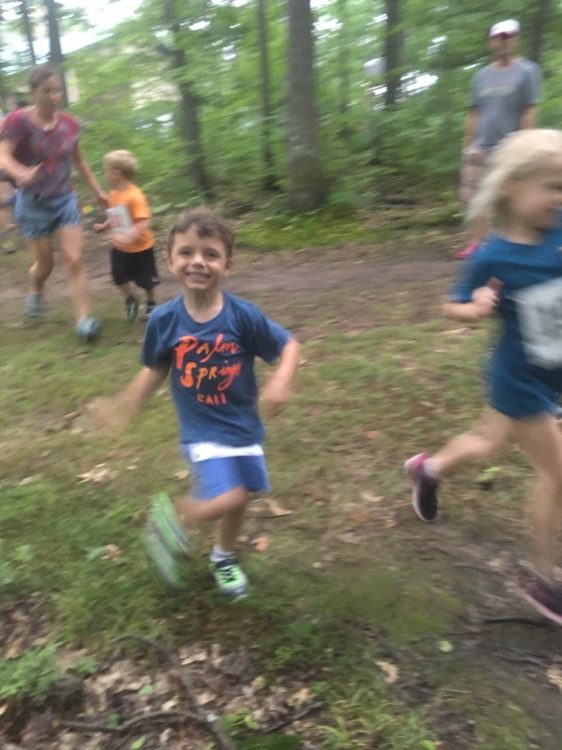 I was the Girl Friday during race week, doing the million and one tasks Andy couldn’t get to himself. This earned the “race week” slogan of “The only week of the year my husband gets to be the boss of ME.” The day before the race, we juggled marking endless single track with handing out race packets. On my end, I was also caring for two young kids at home and trying to hold down a more-than-full-time career as an obstetrician/gynecologist. I still remember Andy finally coming home at 2 or 3 a.m. to grab a few hours sleep. He woke me up a few hours later to head to Tourist Park and get the race started. Once the runners were off, there was still trail left to be marked.

I remember driving forever miles around Marquette, my Subaru packed to the ceiling with race gear, water coolers, food, trail-marking flags, and tons of other “needed items.” I recall running frantically into grocery stores for ice, beer, and lunch supplies; a 5 a.m. trip to Walmart to get a rudimentary first aid kit; keeping up with all the of aid station needs for pickles, potatoes, M&Ms, etc, etc, etc., and then finally collapsing into bed that night, after each racer was in and the start/finish line cleaned up.

I wish I could say it ended there. On the verge of collapse after holding the event together by a shoestring that first year, we took all the gear, food, flags, and everything else that went into the event and stuffed it into the garage. We were so burned out by the experience we could barely look at it for at least a week. The leftover bananas were, I remember, unceremoniously dumped on the kitchen counter and resulted in a fruit fly invasion that lasted all winter. Andy started picking through the debris the following week, as fast as one can with two little children at home. I think, but am not entirely certain, that we were finally able to park inside the garage once the legendary snow of the Upper Peninsula came along that winter. 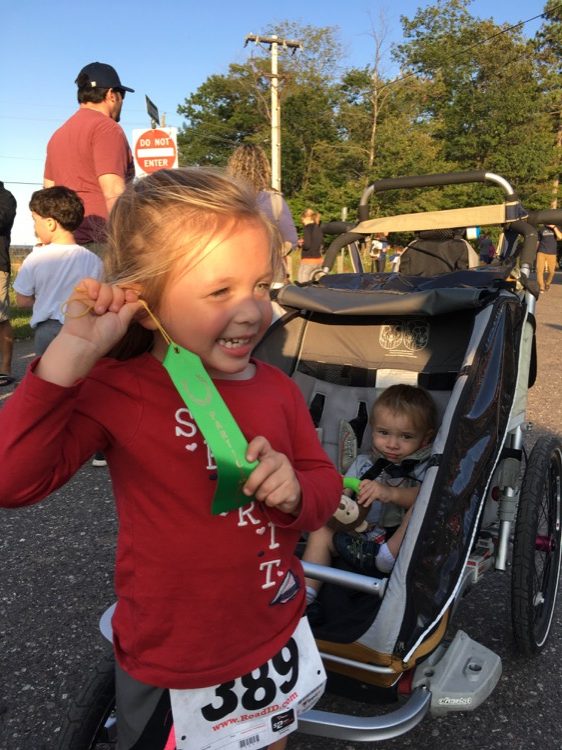 5-year-old Marie is a race veteran 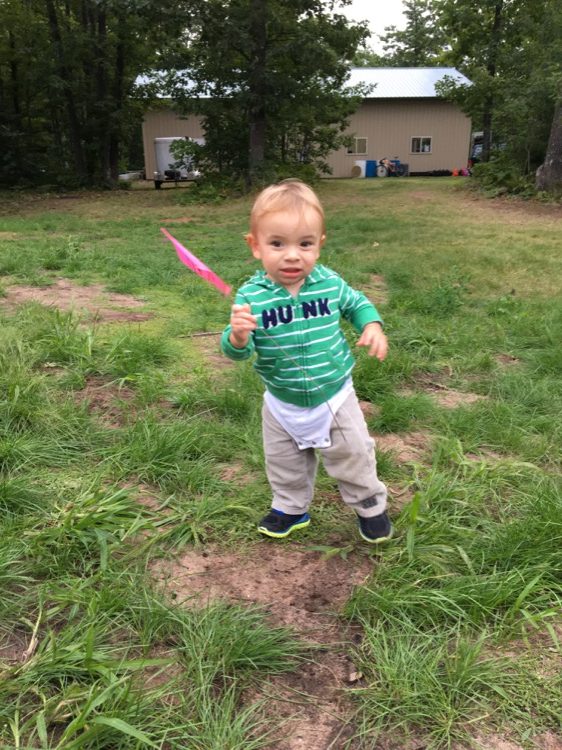 Fast forward another seven years, and we are still at it. The race has gone on through the birth of two more of our children, a house addition, significant illnesses of several key volunteers, and more. There have been years with minivan flat tires, poopy diaper blowouts at the trail head and toddler meltdowns “when I just need to get these lunches delivered!” And that’s just been the stuff on my end. Looking back, though, not everyone gets to see something they’ve worked so hard on become such a success. And that’s exactly what it has become. Through the support and involvement of countless volunteers who have become life-long friends, the event has become something that people from all over the United States look forward to every year as “the” Midwest ultra in August (I’m sure I’m a little biased on that one).

My contribution has definitely become less as the years have gone by, the number of small children in our household have gone up, and the number of people invested in the success of the race has skyrocketed. I still make it a point every year to make homemade sandwiches to bring to all the volunteers at every aid station, and now my children take great pride in helping with this, as their contribution to “Dad’s Race.” The life lessons they are learning watching their father help to bring such an event to fruition every year are invaluable.

We still say every year: “Do we do it again?” but not with the same sense of burnout with which it began. We may someday decide to have someone else “take the reins” so we can focus more on kid stuff as they get older, but the race will remain a bright, significant part of mine and my children’s young lives when we retell the story of their childhoods. 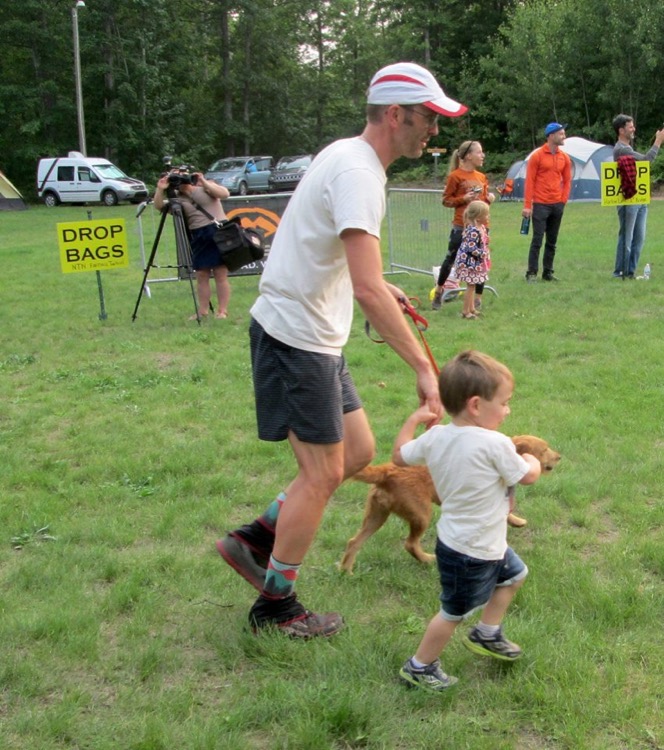 Race Director Andrew Grosvenor with Kolbe (child #4) and Rosie (newest member of the Team) getting in to the Children’s/Family Race!