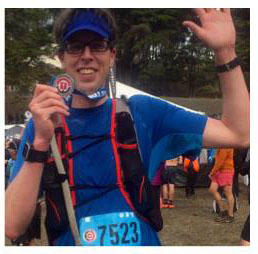 Travel Writer Finds a New Perspective as an Ultrarunner

Professional travel writer, Tim Neville, has visited over 50 countries. He’s skied in North Korea, sea kayaked around the Galapagos Islands and climbed pyramids in Egypt – all while researching stories for The New York Times, Outside Magazine, and Skiing Magazine, just to name a few. Needless to say, Tim has always been an adventurer at heart. Except when it came to running. So when I heard about his recent finish of The North Face (TNF) 50K in San Francisco, I had to investigate.

When I met Tim years ago we bonded over our alma mater in Montana, but when I mentioned running he expressed an underwhelming interest. A skier with a cross training regimen that included mountain biking and hiking, I never knew him to run. Tim said that every time he went out in his running shoes, he’d get injured. Efforts for his training to circumnavigate the Three Sisters in the Three Sisters Wilderness, a 40+ mile hike, set him back on the injured list after he attempted running on some shorter local trails. While his hike was postponed and he recovered from his injury, a new pair of shoes lured him back on the trails.

Sometimes all it takes is a pair of running shoes to change your perspective, and that’s exactly what happened. Tim began running regularly again – injury free. A friend proposed they train for a 50K, giving him a plan well in advance of race day which was nine months away. During that time, he discovered a satisfaction for running through the woods, and was able to explore the mountains in his backyard with a whole new outlook. He plotted new routes on familiar trails, knowing he could see much more landscape in a shorter period of time. In Oregon, he traversed through the Three Sisters Wilderness to the Dee Wright Observatory. On assignment in France, he ran where he used to ski in Chamonix. During a visit to Patagonia, he climbed part of a course during the middle of an ultra and was mistaken for a participant. He was hooked.

Needless to say, Tim was ready when it came time to toe the line at his first ultra. With months of training that included dialing in his fueling and nutrition – a task which he found rewarding, and running trails he had only previously hiked, he found the course at TNF to be fast, while the 6,000+ feet of elevation gain provided a welcome change of pace. He said he even finished with some fuel left in the tank, and is looking forward to the challenge of running it again.

As a veteran traveler and adventure seeker, ultrarunning has given Tim a fresh perspective on all the places he’s been, and that’s saying a lot. “There’s a whole world out there that you can’t appreciate until you’re running in it,” he said.