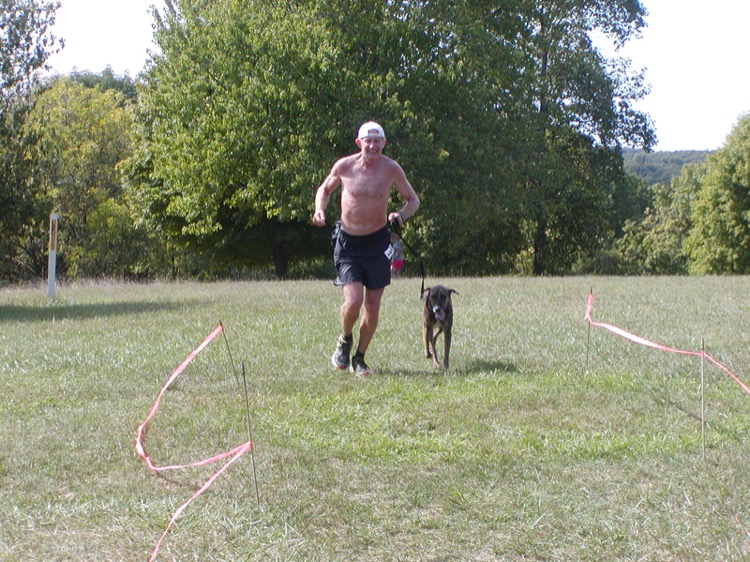 Shane the dog and his good buddy Henry, smiling all the way to the finish. Photo: Kev Hawn

Trails 4 Tails Ultra Run is for the Dogs

In the nine years at Trails 4 Tails Ultra Run we have had several records set and fall. But this year was a little different. Finishing fourth overall was our first-ever and new record holder Shane, a mixed-breed canine weighing in at 53 lbs. Shane pranced in with a wide smile on his face at the end of each eight mile lap. He finished alongside his human, Henry, to much bell-ringing. After a cool down, Shane was awarded several dog treats, a 1st place dog medal, and a commemorative bandana. Over the years we have had several dogs run parts of the course or full laps. Actually, Shane had run a couple laps two years ago on a relay team. Congratulations to Shane for setting the bar(k) for future participants!

This is a good lead-in to the other top finishers. All of this year’s champions had run Trails 4 Tails previously. Eric Ferree finished 3rd last year and came in happy at an even six hours for the win this year. 5th overall and 1st woman was Michelle Baldwin in 7:29. This was Michelle’s fourth appearance. Her persistence paid off with a victory.

Trails 4 Tails also includes a relay. Nine teams participated, and “1 Leg Up” team took that division in 6:31. This was their third running at our event.

With the eight mile loop course on a combination of trails, shore line, and some roads, we encourage runners to come out and do what they like. Credit is given to anyone who finishes 8, 16, 24, or 32 miles as well as the full 40 miles. This blending of runners with various abilities, as well as the relay teams, provides a fun atmosphere at the start/finish area. Two-legged and four-legged participants both young and old enjoyed the day until the last wagon headed west into the sunset.