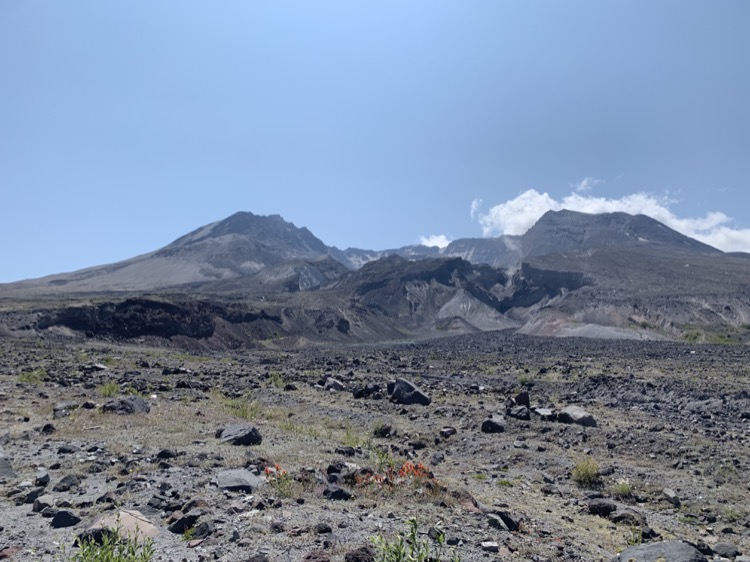 Through the Storm: The Volcanic 50

I could hear two runners approaching from behind. I’d been passed dozens of times that day. But now, with less than two miles to go, I was determined not to be passed again. At the end of a long day, with over 11 hours on the mountain behind me – boulders, sand, canyons, heat and dust – I drank the last of my water and forced myself into a painful shamble that vaguely resembled a run.

“It looks like rain, kids. Let’s get back on the road.”

My two sisters and I begrudgingly quit playing in the sand dunes of the eastern slope of the Cascade mountains, and climbed into the van. I was nearly six. My sisters were eight and three. It was May 18, 1980, and we were driving from the Tri Cities in eastern Washington to Seattle.

It was soon clear this was no ordinary storm. An opaque blizzard of black snow began falling. Ten in the morning, and the sky was obsidian. Literally. A cubic kilometer of vaporized rock had dispersed into the atmosphere. Mt. St. Helens, a nearly 10,000-foot volcanic peak in the southern Cascades of Washington, erupted with a 27,000-ton explosion. Everything within eight miles of the peak was obliterated in a pyroclasm reminiscent of a nuclear strike.

Through this haze of catastrophe, my father drove three children across the mountain pass at four miles per hour.

Though I grew up in the Pacific Northwest, I’d spent twenty years in St. Louis and another five in Philadelphia. I returned to Seattle in 2018 and began running with my partner in the rugged peaks and valleys of the Olympics and Cascades. I’m slow but determined. Long runs through these challenging, beautiful landscapes are good for my heart. But I didn’t get that until recently. 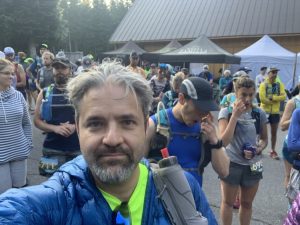 After college, I began drinking seriously. I drank for the next 12 years. I was never under any illusions about the significance of my drinking: I was an alcoholic. But I imagined I could avoid consequences and that I could keep it secret. I was wrong on both counts.

I destroyed a marriage and a business. I smoked cigarettes and was unproductive. But in 2008, something – I have never known exactly what – tipped into intolerability for me. With the help of counselors, an inpatient rehab and a 12-step program, I’ve been sober since February 16, 2008. I quit smoking 18 months later and started running.

My father had a stroke when he was 59. He mostly lost the right side of his body, but his mind wasn’t affected. Doctors told him he’d largely recover if he did the exercises. He didn’t. Uncontrolled diabetes, alcohol, and the totality of his sedentary lifestyle eventually resulted in congestive heart failure.

My parents separated less than six months after the eruption. I didn’t see my father for three years. He lived only a few miles away. I don’t know what he was experiencing then, but I know what it’s like to spiral. I don’t imagine he was well.

He contracted a urinary tract infection in February of 2018 and spent a few weeks in and out of the ICU. The three of us, his children, had a sad but pragmatic conversation. We transferred him to hospice and I was glad to let my father rest.

Emerging from my 20s into my 30s, I was like my father in every respect that I hated and unlike him in his strengths. It has been a labor of startling difficulty for me to understand who he was, and how to integrate that into my own life. Letting go of the ways he failed (and did in many ways) and holding on to the ways he succeeded.

All of his successes crystallize on that morning when my father, knowing nothing of what we were driving into with the cargo he most valued in the world in tow, coaxed that van through a roaring volcanic eruption and reassured us of what he could not know. “Everything will be all right,” he said. 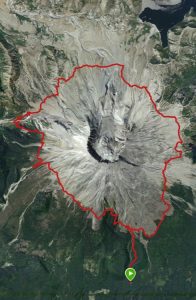 The morning of August 3, 2019, I set off to encircle the mountain that provided me with the most important event of my life. Its cataclysm forged a bond between boy and father so deep that decades of estrangement, alcohol, shame, failure, fear and disease could not destroy it. I trained for months, but I was afraid. It was the hardest thing I’ve ever done.

The race is 33 miles long and has 7,400 feet of gain. There’s a long climb to the trail, and a 29-mile loop through every terrain imaginable: verdant forests, deep canyons, sand mounds, razor-sharp boulders the size of Volkswagens and the blast zone.

As I slogged my way through the miles, I spoke into my phone’s recorder, telling my dad about the race. Whether it was my faceplant at mile 10 while running downhill through the forest, or fighting my way up the mile of motherf’er sand at mile 15. Or, at mile 19, when a young man in front of me stepped off the trail and sat down in the blast-zone dust.

“You can’t sit here,” I said. We had two miles until the next aid station.

I gave him one of mine. “Drink this and walk with me.”

We walked together to the aid station where the volunteers were dressed as astronauts in a nod to the moonscape of grey waste we’d crossed. I jogged on up Windy Pass. 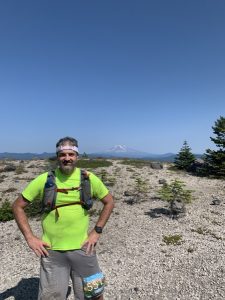 At mile 29 is a pumice field. There is no trail, just white plastic rods marking a navigable route. The rock is crenellated and protrusions lacerate any flesh that brushes them. It goes on for two miles of soul-destroying agony.

Then, finally, comes the descent—and sweat and blood and exhaustion. I ran the two fastest miles of my race, and they couldn’t catch me. Eleven hours and 14 minutes after I started, I finished the Volcanic 50. I wasn’t anywhere near the front. But I wasn’t last, either. I’m proud of myself and proud of what my father taught me.

Time is too precious not to waste some. Love the people around you and be fearless in protecting them. If you can’t know whether it’s better to go forward or back, go forward. Drive through the storm.

147,000 acres of old growth forest had to die to teach me those lessons. And so did my father. But I went back to the mountain. And I drove through my storm. And just like the last time, my father carried me through.

Indeed, you weren’t last…I was. 🙂 I left the final cut off by a mere couple minutes, knowing the most that could happen is they would sweep me home. Which they indeed did do, but we’re very nice companions for those final miles.

Well done on getting through the tough race.