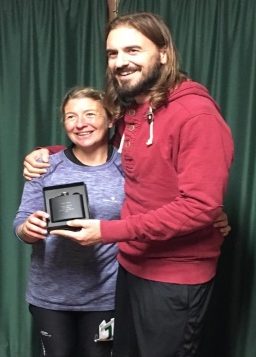 Lorrel receiving her prize from her brother Ronnie Staton, who happened to be the Race Director.

Through the Eyes of a Support Runner

Endurance running can be at times a selfish pursuit with us running at all times of day and night to stick to our plan. This, however, changed for me last year when my wife was out with her friend Lorrel. Talk turned to Lorrel’s latest challenge, the Robin Hood 100, a 100-mile trail race that starts and finishes in Retford, England. As they discussed her preparation, it became apparent Lorrel was short of support runners and so the following text landed in my inbox: “Any chance you could run some of the night with Lorrel next Saturday? Probably looking at stupid o’clock.” As I sat snuggled with my daughter watching a film, cold beer in hand (me, not my daughter), I texted back, “No problem.” Little did I know!

The original plan was for me to run with Lorrel from mile 69 to mile 84. However, this changed on race day. The tracker showed Lorrel was progressing well, so it was no surprise when I got a call from her support crew asking if I could join her a little earlier. “No problem!” I was getting good at this agreeing to things! The next question was not so easy to answer. “Could you run through to the finish with her?” “No problem,” was again my reply, this time in a slightly higher-pitched voice. 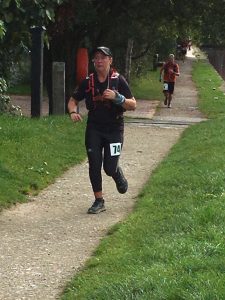 Lorrel in the first half of the race.

So this was how I found myself somewhere in Clumber Park at 9:00 p.m. on a Saturday night, kitted out for a long stretch on my feet. The sport of tracker watching was now replaced with searching for approaching head torch beams. At 9:30 p.m. a light materialised into Lorrel and I took over from Sam, her previous pacer.

As we set off, Lorrel informed me of her strategy to run the flats and downhills and walk any inclines. This seemed a sensible approach and we settled into a nice rhythm. There was plenty to talk about, which kept Lorrel’s mind from the challenging miles that remained. Over the next few hours we covered many topics and the full range of emotions, although I do think we avoided tears, which was a blessed relief for me.

After about five miles of the run/walk strategy, Lorrel’s feet were starting to suffer with blisters. This brought about a switch to marching; we kept up a decent pace and it was more bearable for Lorrel.

At this point we were on the second of two large loops of Clumber Park. At times the wooded trail was eerily still and silent. Most of our attention was focused on looking for the red and white taped markers which indicated we were still on course. Occasionally the route would open out into fields, giving us glimpses of civilisation in the distance and the star-studded sky above. It was a surreal way to spend a Saturday night.

During this loop Lorrel kept mentioning she would be happy once she got back on the Canal because that would signal to her that she was on her way home. I had to smile to myself that only an ultrarunner could view a point 18 miles from the finish as the start of the home straight! There were other moments of humour that maintained our spirits. Given we were running the Robin Hood 100, it was inevitable that we spontaneously burst into singing “Robin Hood riding through the glen,” just as we turned a corner and entered a check point, much to the amusement of the race marshalls. Not long after, confusion reigned when Lorrel’s watch buzzed to tell her she had done 10,000 steps – at about mile 80? We then realised it was 1 a.m. and that was the count for just the last hour. Finally, my favourite quote of the night was Lorrel proclaiming, “That was my most difficult wee yet.” Her battered quads had failed to hold the normal squat position!

Eventually we arrived at the much anticipated Canal. However, the euphoria of reaching this milestone was soon replaced by expletives from both of us as we discovered this terrain was not so easy in the dark. There were long stretches of rutted, tufty grass and difficult, uncomfortable cambers that constantly tripped us up and threw us off balance. The plus side was that we could get our bearings as we passed familiar villages, parks and pubs. So we marched on, maintaining both a consistent pace and our endless chatter.

After a quick refuelling stop in Retford, we were interrupted by the buzzing of Lorrel’s phone. It was the support crew. The next woman had just passed them and was moving well. Cue more swearing from Lorrel and assertion that we needed to start running again. I was secretly quite pleased about this. The constant marching had caused my hip flexors to stiffen, so it was good to move the muscles differently.

I set a manageable, consistent pace and let Lorrel state when she needed a walk break. The walk breaks brought about a change in role for me as Lorrel constantly asked if I could see any runners behind us. Her competitive spirit burned bright even after 94 miles of hard running! We were moving the fastest since I had taken over pacing duties and I was confident we would be pulling away from the runner behind us.

The last couple of miles were difficult as Lorrel’s feet were causing her serious pain. Daylight was beginning to make an appearance, even though it was struggling to brighten the path through the autumn mist that accompanied our final efforts. As we arrived back on to tarmac, we broke into a sprint down the drive of the village hall which signaled the end of Lorrel’s 100 miles and my 31 miles.

Lorrel finished third woman and received her prize from her brother Ronnie Staton, who was the race director. Although both of them were shattered from their respective exploits, their pride was obvious. As well as the trophy, Lorrel sported some impressive blisters on both feet, testament to her awe-inspiring effort.

So how was it for me as a newbie to support running? I really enjoyed it and was fully wrapped up in helping Lorrel achieve her aims. I was chuffed to bits when she realised she was third woman (12th overall) and her time was nearly two hours inside her 24-hour target. Physically, my legs were a bit stiff and running all night without sleep left me drained. Once back in bed, I fell into a delirious, almost fever-like sleep. It took a few days to fully recover from the sleep deprivation. So would I do it again? Absolutely! In fact, I am already signed up for leg two through the night on a friend’s Bob Graham Round attempt this July. Bring it on!