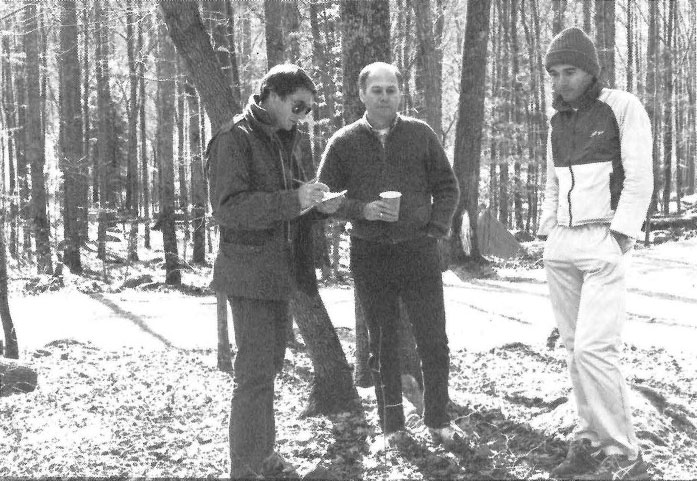 The handlers look glum as they wait, for runners - any runners - to return.

This article originally appeared in the May 1986 issue of UltraRunning Magazine. Current subscriber? you can search and view all our archives.

We should have known better… The 13 starters were indicative of what would transpire. The fact that Barry Barkley, the race’s namesake, had to work and missed the event. The failure of the temperature to reach above freezing during the race – both the weekends, before and after, it had reached into the 70’s. Most of all, just knowing the nature of the Boundary Trail, we shouldn’t have even tried. But we did.

But, we’re getting ahead of ourselves; the story begins in the beginning. A few hundred million years ago east Tennessee was covered with a shallow inland sea. Over the eons the land emerged to reveal a Tennessee more resembling Kansas. Flat. Millions of years passed and gradually deep valleys eroded through the layers of rock and Tennessee took on it’s current form. A series of eroded hills each leading to higher plateaus in a series of stairsteps, remnants of the sea floor deposits of eons ago. The highest plateau now remains as an area of rugged mountains in east Tennessee.

During the start of the fossil fuel era these mountains were found to be rich in coal deposits and the spoilage of strip mining began. Fortunately (for everyone but the ultrarunners) a section was set aside as the Frozen Head State Natural Area.

In the late 1930’s, a government program, the CCC got the task of building hiking trails thru the park. The crowning glory of the trail system was the Boundary Trail. Following true to the boundaries, regardless of what land features they might cross, the trail is a tribute to governmental efficiency. But for the periodic sprucing up by the government the trail would no longer exist, as it has been spurned by hikers as “too difficult”. As it is, much of the grim north section of the Boundary Trail is virtually indistinguishable.

Hundreds of millions of years went into building the perfect course. A lot less time went into tearing down the assembled field. The 13 runners did not start together, the majority starting on their own as they failed to make the starting time. Three entrants failed to take the correct trail and during the hour between the start and dawn, their flashlights were clearly visible as they made their way up the wrong mountain.

Those were the lucky three, as the other ten of us commenced by climbing over 900′ up Rough Ridge and then struggling up 1160′ to Chimney Top in the first three miles. At least it was along the “good end” of the trail.

The so-called “good end” continued uphill and down with occasional panoramic views and plenty of time to enjoy the scenery while trying to stay on the trail.

Up and down, thru deadfalls, brush, ice and snow the ranks continued to thin. By 12 1/2 miles only 8 runners continued the fray. Doyle Carpenter and FredPilon led the way and were the only two remotely on pace for a 24-hour finish. Unfortunately for them, the 12.5 mile point only began the difficult portion of the course – the North Section. What can be said about the North Section? Nothing kind. Consisting of virtually continuous switchbacks, it is poorly marked, severely eroded, overgrown, and laced with deadfalls.

The front runners (Pilon and Carpenter) maintained a good pace thru Jury Ridge. At that point they had the extreme good fortune to become disoriented, wander off along the ridge until they reached a jeep road, and follow it out of the woods. The good fortune consisted of missing the one-mile,1600′ climb over Bird Mountain at the end of the first lap.

This left Tom Green and his nephew, Richard, the privilege of being the first to clamber across Bird Mountain and reach the end of lap one at 20 miles. Despite breaking nine hours, they did not choose to defend the lead.

At 9 hours, Ken McMaster emerged. A hiker, engaged by myself to go through the North Section to look for stragglers, located Ken atop Jury Ridge -totally lost and preparing to follow the “easy” route blazed by Carpenter and Pilon – and pointed him in the correct direction.

Damon Douglas – “the winner” (at least, he got the farthest).

Later, the hiker expressed uncertainty as to whether or not it was an act of kindness. Ken must have had no doubts, as he also headed for home.

Now, of the original 13, only 3 of us remained. Intrepid Damon Douglas had discarded the original course layout and was running the sections in a different sequence in order to get off the North Section before dark. Gary Buffington and myself were struggling through the last few miles of lap one, just wanting to hit 20 miles and call it a day.

It was at this point that Buff quit speculating as to whether any runners would attempt lap two, and began wondering if instead they might be waiting for me at the end of lap one with malicious intentions.

Somehow we reached 20 miles, after an interminable trek up Bird Mountain – an houi—and-a-half mile that won’t soon be forgotten. 12 hours and 18 minutes for 20 miles; we didn’t move fast, but we didn’t rest a lot, either. It was enough and we bagged it.

Now it was Douglas alone, out in the dark. What form of fun he had out there only Damon could tell. Whatever kind it was he had a lot of it, dragging it into 35 miles after 17:08:48. Considering he could win without finishing, and stood no chance of finishing within 24 hours… then there were none.

So, 13 starters, no finishers, only one runner past 20 miles. A rousing success all around. We learned some lessons for next year. Wait until later in the spring for warmer weather. Put up a few course markers. Go with the Douglas route. Of course it is still impossible to run 50 miles on that trail in a day, but if anyone wants to try, we’ll be doing it again next spring.