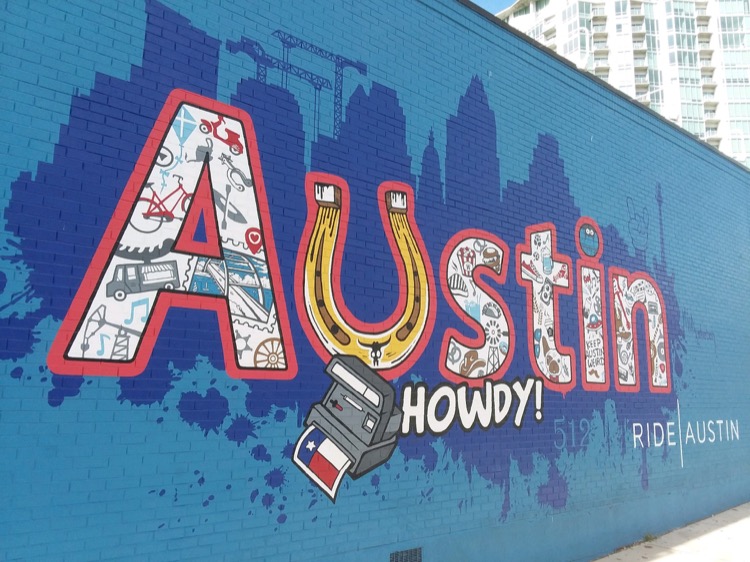 In addition to seeing all the great new footwear in the pipeline for 2019 (read all about them in Part 1 of our preview), The Running Event in Austin, Texas also provided an advance look at cool apparel, gear and food we’ll be testing and using on the trail in the year ahead.

Nathan
One of the biggest developments from Nathan will be their use of insulated fluid reservoirs and flasks in all their products. The products are made by Hydrapak, using IsoBound insulation technology that prevents latent warming from your body heat. It uses double-wall construction and open cell foam to create a barrier around the reservoir, and has proven in testing to keep fluids cooler for 38% longer than a standard reservoir. Nathan has exclusive rights to this Hydrapak technology for 2019, and the insulated reservoirs will be standard with Nathan products beginning in early 2019.

Regarding the vests themselves, 2019 will see a reboot of Nathan’s VaporAir and VaporAiress vests, which are medium-cargo options between the low and high cargo options of the VaporKrar and VaporHowe vests. The Vapor Air/Airess has 7L cargo while the Krar/Howe vests come in 4L or 12L options. A key update to the VaporAir and Airess include a new CinchFit wrap-around sizing system that is gender specific and adjustable to a wide variety of sizes and shapes. These vests come with a 2L reservoir and weigh 12.2oz including the bladder. They will be available in February for $150. 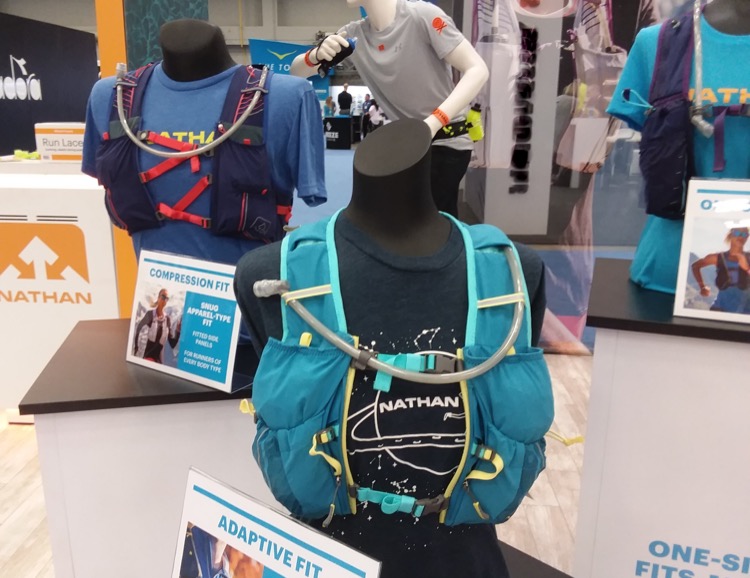 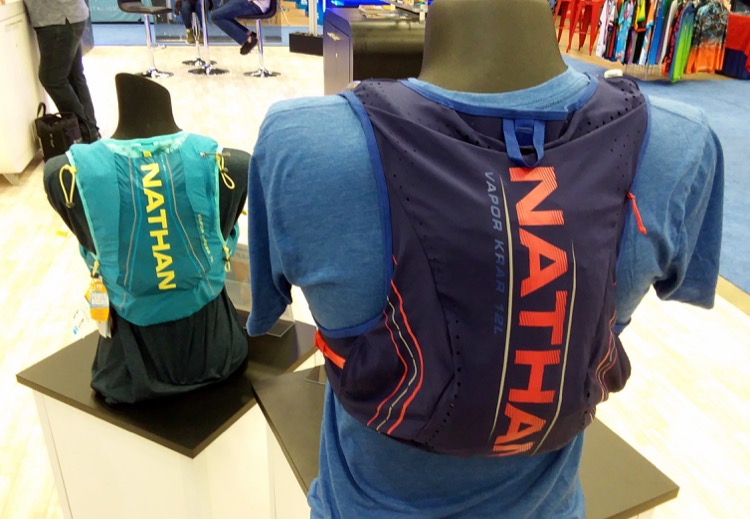 L to R, Nathan VaporAiress and VaporKrar 12L, back view

Changes to the Krar and Howe 12L vests include a large zippered water resistant chest pocket designed for smart phones, larger front stash pouches, and front pockets that can accommodate 20oz soft flasks instead of the previous 12oz. The 4L Krar/Howe vests come with two 20oz soft flasks and are compatible with a 1.5L bladder (not included), while the 12L versions come with a 1.6L insulated reservoir. These will also be available in February, with the 12L retailing for $200 and the 4L for $165.

Salomon
Salomon introduces its first gender-specific vest this spring: the Women’s Advance Skin 8 Set is designed to eliminate pressure on the chest when it is cinched down. The dual integrated 500ml soft flasks are shorter and wider than traditional flasks, and sit lower on the chest, with long straws to sip on the go without removing them. Like all Salomon vests, it uses a lightweight minimalist design while still providing plenty of pockets and 8L of total cargo storage. The Women’s Advance Skin 8 Set weighs 8.4oz and will be available in February for $145. 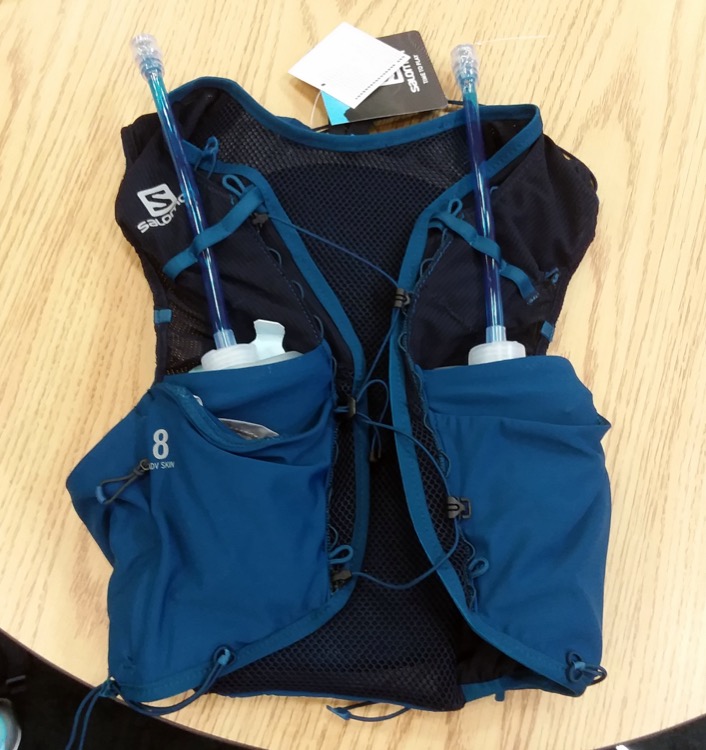 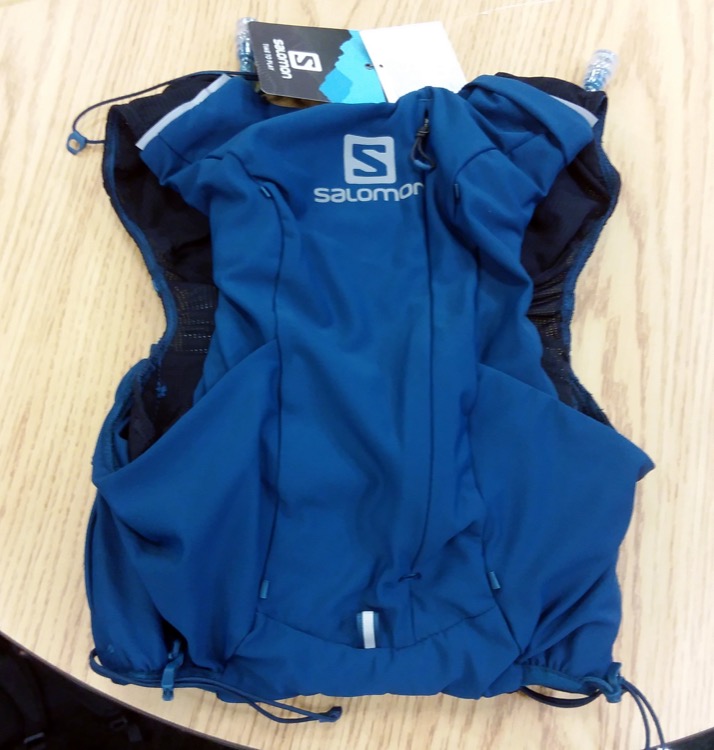 UltrAspire
Two of the most widely-used models in the UltrAspire line will get updates for 2019. The Zygos 4.0 updates one of our favorite 100-mile packs in a number of ways, most noticeably with a removable insulated barrier between the rear mesh and the reservoir compartment that keeps your fluid cooler while also preventing items in the pack from getting saturated with sweat. This insulating layer will be standard on most UltrAspire packs in 2019. Additionally, the new outer panel uses expandable mesh to give the pack an extra four liters of storage compared to the previous version (14L compared to 10), with compression cords to keep the pack stable when it’s not full. There are two additional flat quick access pockets on the front for additional storage, and new adjustable shock cords on front pockets for a secure fit with any bottle. The Zygos 4.0 comes with a 2L fluid reservoir and will release in the spring for $175. 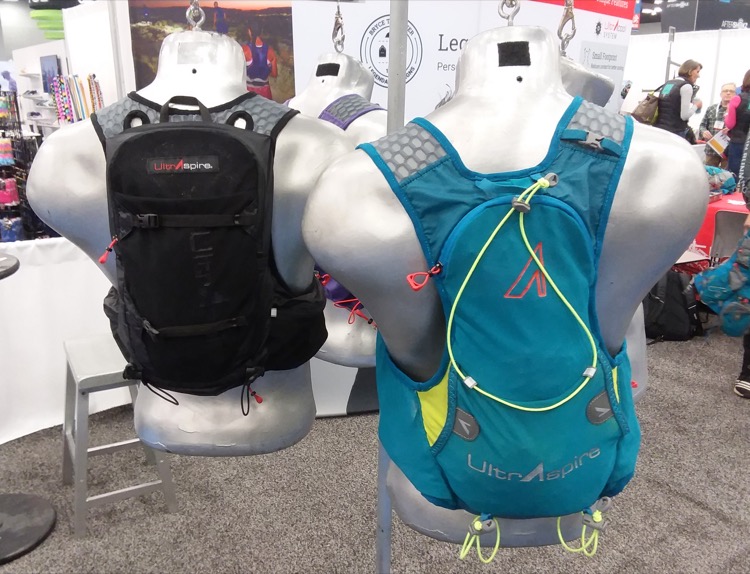 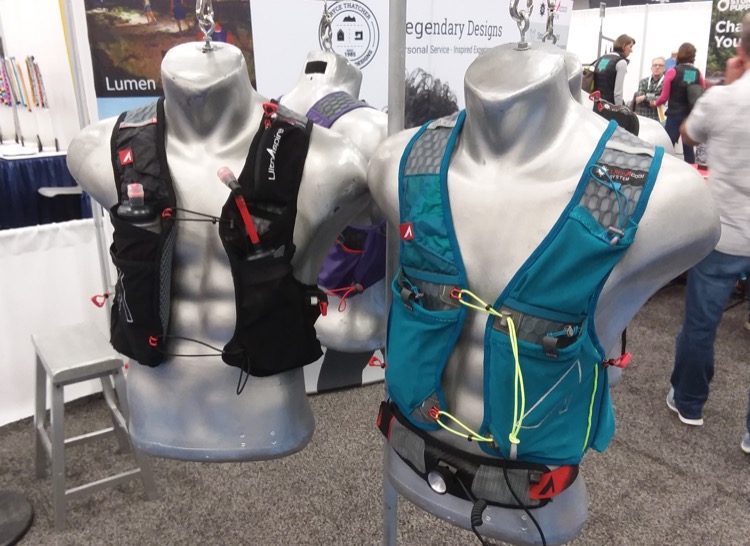 The new Alpha 4.0 does not come with hydration flasks or reservoir, but has a number of significant upgrades in addition to the insulated barrier described above. The front pockets have new lightweight mesh material, greater capacity than before, and are flattened out so they’re less prone to bounce when empty. Its Max O2 sternum straps have been slightly repositioned so there’s no interference from these front pockets. In the rear, the large pass-through is repositioned for easier access and has stronger magnet closure to keep cargo secure. There are also new attachment points for poles or even an ice axe if needed. The Alpha 4.0 is a fall 2019 release and will retail for $119. 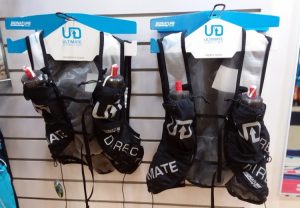 Ultimate Direction
This spring’s new addition to the Ultimate Direction lineup already has a 100-mile win to its credit, as it was used by Jason Schlarb at September’s Run Rabbit Run. The Halo Vest is UD’s lightest vest ever, but provides more storage than any of their previous race vests thanks to a number of stretch-compressive pockets that expand to accommodate more stuff, but close securely without the use of zippers or straps. Cargo capacity will come in around 11L total, and the vest will come with two 500ml soft flasks. 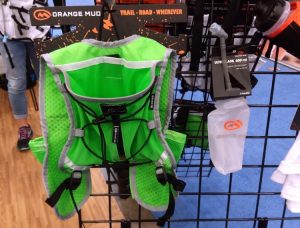 Orange Mud
Orange Mud is one of the most reliable innovators in endurance gear. One of their new additions for 2019 is the Gear Vest Pro, a hybrid of two popular packs from the current line. The Gear Vest Pro has the same size and front pocket layout as the Gear Vest, but adds the large rear pouch originally found on the larger 2L Endurance Pack. The Gear Vest Pro comes with a 1L reservoir and will be available in three colors. We’re particularly fond of the Coyote Brown, which looks perfectly at home on the dirt. It will be available in February 2019 at an MSRP of $125. 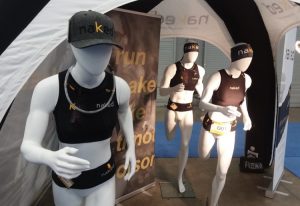 Naked
More than any other company, Naked bridges the gap between gear and apparel and the newest additions to their lineup are available now. The men’s and women’s Running Vests ($80) provide up to 3L of carrying capacity, with large compartments that allow you to completely customize where you want to carry all your gear. They both have an internal micro key clip, and external shock cord loops that can secure a drink tube. Women can wear the Running Vest over a regular sports bra, but they also have the option of the Running Spra ($75). This piece incorporates supportive framework into the main vest structure, with most of the cargo carried in rear mesh compartments. 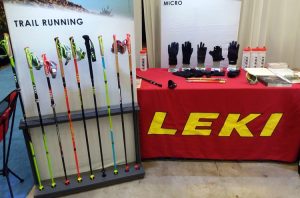 LEKI Trail Poles
The full line of LEKI trail poles gets updated in spring 2019, with the most noticeable improvement being a new lightweight and breathable mesh Trigger Shark strap that attaches to the handle. The two models we’re most excited to try are the foldable Micro Trail Pro ($200), which packs down to 37cm and weighs 195g per pole, and the one-piece Vertical K ($160), available in 5cm increments and with a spec weight of 135g per pole. 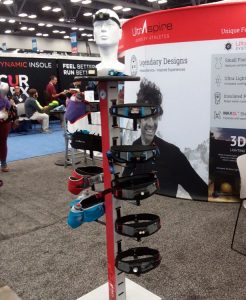 UltrAspire Lumen series
UltrAspire’s Lumen series gets a complete overhaul in the fall of 2019, with a massive selection of sizes and brightness to choose from. The smallest is a 180 lumen clip light that attaches to apparel or a hydration vest, with a soft silicone casing to ride softly against your body. Waist lights in this series come in 200, 400, 600, 650, and 800 lumen options; the 800 Ultra is impressively lightweight and positions an external battery pack comfortably on the small of your back. There’s also a headlamp in the works from UltrAspire, which should release at the same time as the rest of the Lumen series. 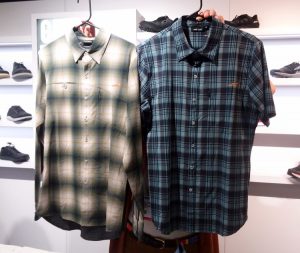 Altra Trail Running Button Ups
We’ve been longtime proponents of rocking plaid shirts on long trail days, but we also love technical fabrics that are designed for performance. Altra combines the best of both this spring with these button-up styles made from lightweight, breathable fabric with ventilation panels in the back. They have a right front button pocket, invisible left zipper pocket, a built-in sunglass cleaner, and a “stay down” collar that won’t pop up when you’re running (we can’t wait to test that claim out). These shirts will be available in both short or long sleeve versions in early 2019. 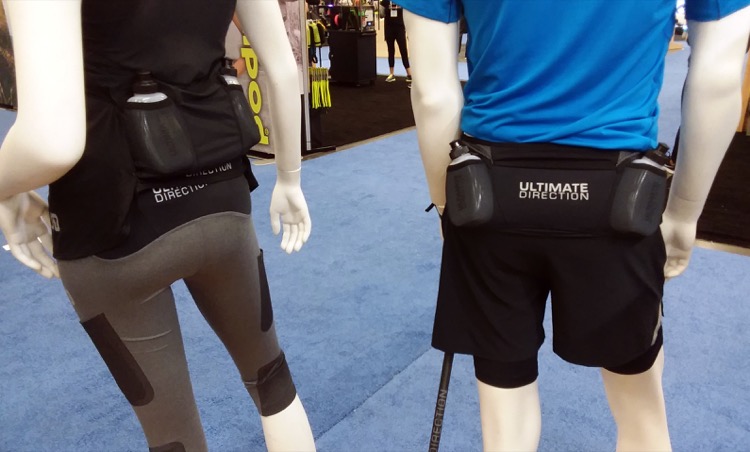 Ultimate Direction HydroLight
UD’s shift from hydration gear to apparel brings the hydration component along with it. This spring they will launch the HydroLight series, a collection of men’s and women’s products including shorts, leggings, skirt and tank top. Each item in the collection comes with two 300ml FlexForm bottles that are strategically shaped and positioned to minimize bouncing and chafing. They will also have additional storage areas for non-fluid cargo. 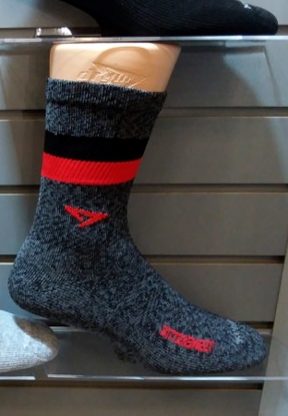 Drymax Socks
Most of the Drymax collection will see a cosmetic overhaul in 2019, with many new designs originating from collaboration with their growing roster of elites. There’s a new Pixie Ninja hyper thin crew model and a “Bittersweet” lite-mesh crew from Zach Bitter. The lite trail category introduces two new Ellie Greenwood styles, and a Band of Runners model whose proceeds support the charitable organization of the same name that provides trail experiences and camaraderie for United States veterans. The regular trail running models haven’t been christened with an elite runner (yet), but they get a stylish reboot nevertheless, with cool pink and green heathered editions. Most of these socks will be available in January, with the exception of the Band of Runners sock which is available this month on the Drymax website. MSRPs range from $13 to $15 for all of the styles mentioned above. 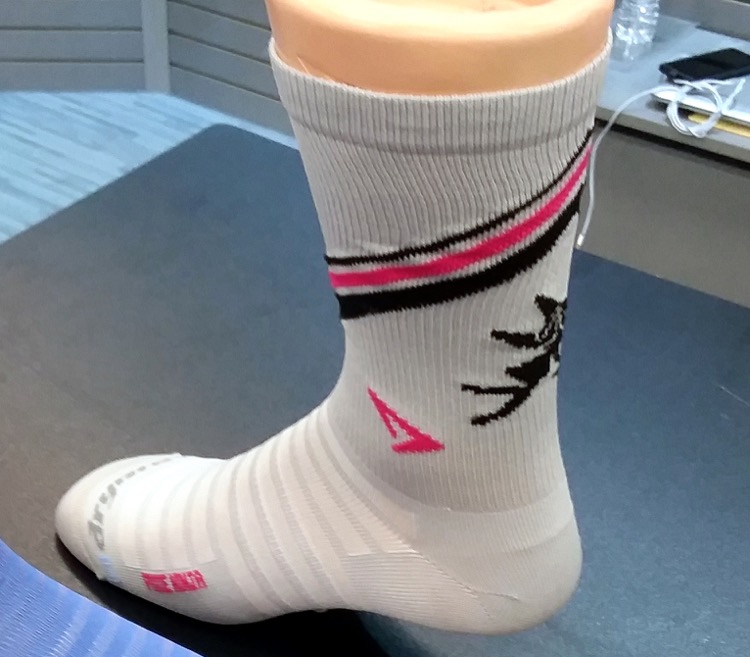 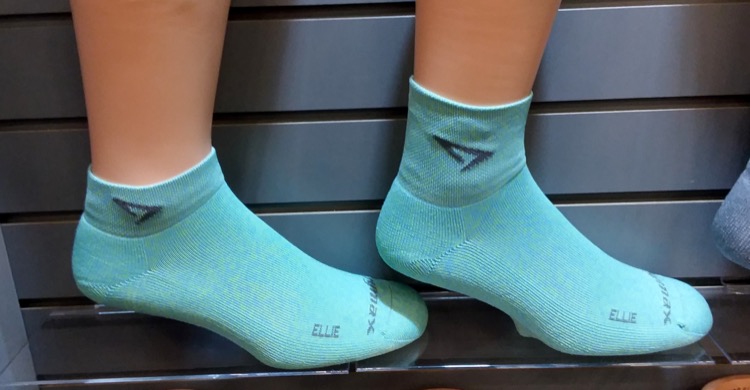 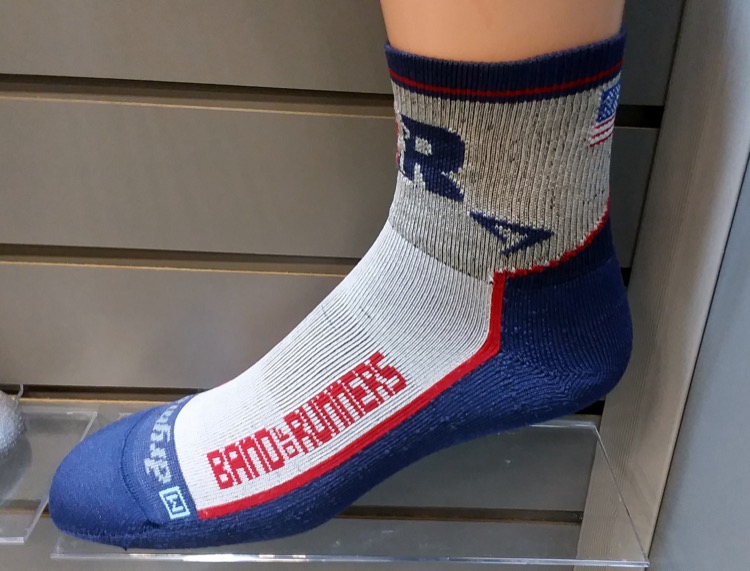 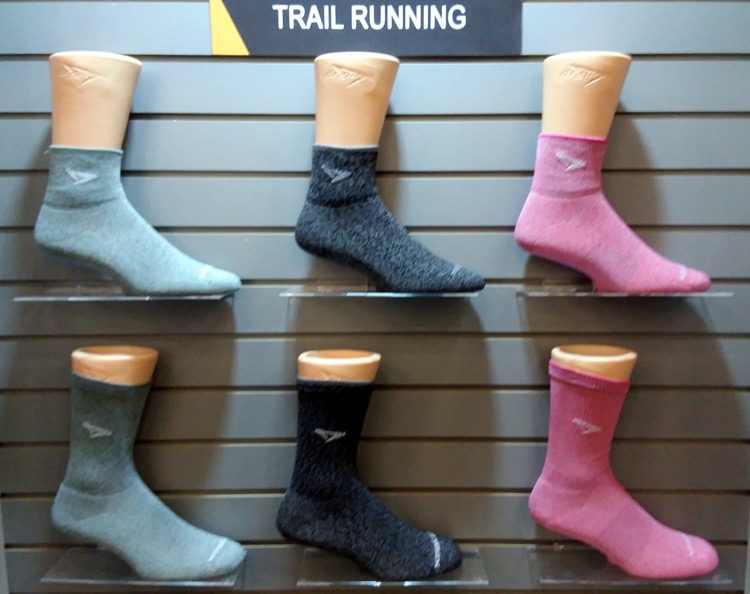 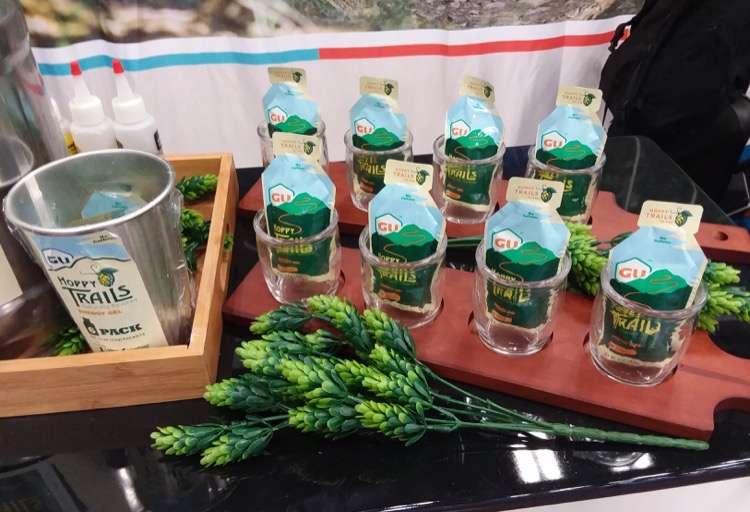 To be honest, there were almost too many nutritional items to keep track of, but one item definitely piqued our interest. GU’s new Hoppy Trails flavored gels taste like – you guessed it – beer. It has no alcoholic content, but there’s a clear hops aftertaste that is intended to satisfy the taste buds of beer drinkers before they even reach the post-race barbecue. This will launch in March, and the company has some cool promotional programming planned with local pubs and running stores to introduce the product, which will be bundled in some locations as a 6-pack with a Klean Kanteen stainless steel pint glass. The integration of beer culture and trail running culture is now complete.

Look for more in-depth reviews of many of these items in the pages of UltraRunning Magazine as well as online throughout 2019.