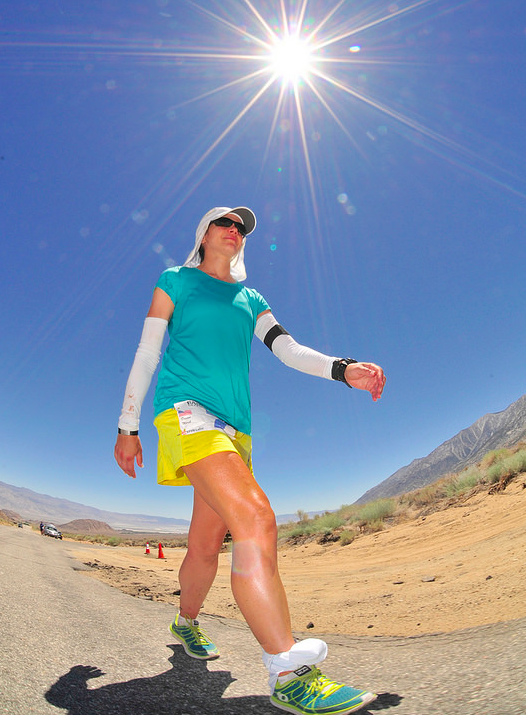 The Road To Death Valley

“Desiree, you can’t lie down. There are scorpions all around, and they’ll sense your heat.” It was the second night of the Badwater 135 and Desiree Marek was 95 miles into this year’s race (her first) and going on 36 hours of no sleep.  All she wanted to do was sit down.  She had started to hallucinate, seeing chairs where there were none and swerving across the blacktop in the middle of the night. But she couldn’t stop on the side of the road mostly because of, well, scorpions. Finally, she needed to rest or she would collapse and fall.  Fortunately, her crew had her back.

Most are familiar with Badwater’s starting line in Death Valley, some 280 feet below sea level. The course then continues, climbing three mountain ranges including the Panamint, Coso and finally finishing in the Sierra Nevadas near the Mt. Whitney portal – an elevation of 8,370 feet. Daytime temperatures hovered near 120 degrees this year, and runners pounded pavement almost the entire way.  Each runner is self-supported, and has 48 hours to finish. While not your typical ultramarathon, this race is definitely not for the faint-hearted.

Desiree’s journey to Badwater started back in 2014 when she crewed for her friend and training partner, Larry.  After experiencing the race as part of his support team, she decided then and there that she would begin building her “resumé” for Badwater.  Runners must apply online and once their qualifications are evaluated, the top scorers are invited to run, as the race website states, “A committee of four race staff members, one of whom is the race director, will then review and rank each application on a scale of 0 to 10…the top 90 applicants with the highest scores will be invited.”

Desiree’s “resumé” consisted of four 100-milers in 2015 including Western States, Tahoe Rim Trail, Cascade Crest and Pine to Palm.  One of the qualifying standards for the STYR Labs Badwater 135 is that entrants must have completed at least three 100-milers, and one of them within the previous 12 months. Because of her time spent as part of Larry’s support crew, and her incredible year of multiple 100-mile finishes, she was one of the deserving applicants selected in early February.  And then, just four days after receiving the good news, injury struck.

Desiree didn’t run for two full months before she recovered.  By April, she began a slow build to intense training for Badwater, which included getting up at 3:45 a.m. and running 10-12 miles before work, another 5 miles at lunch, and a gym workout after.  A 95-mile week is no easy task, but Desiree met the challenge head-on, just like she did with those hot desert winds. Early mornings and intense training can take a physical toll, and a mental one as well.  Fortunately, she recognized that overwhelming exhaustion throughout training was another way to train for the upcoming mental battle she was also about to face.  When most of us might give up due to a daily struggle, Desiree kept fighting for her place on the starting line in Death Valley.

And on July 20, after overcoming constant hip flexor pain for over 100 miles, blistering heat, scorpions, and fatigue, she crossed the finish line at Whitney Portal in 42 hours and 57 minutes.  With a crew of three backing her for the entire 135 miles, Desiree conquered her dream of finishing Badwater. And as one of just 84 finishers (one of which was also her friend and inspiration, Larry), her story is proof that if you want something bad enough, there’s nothing that can stop you.