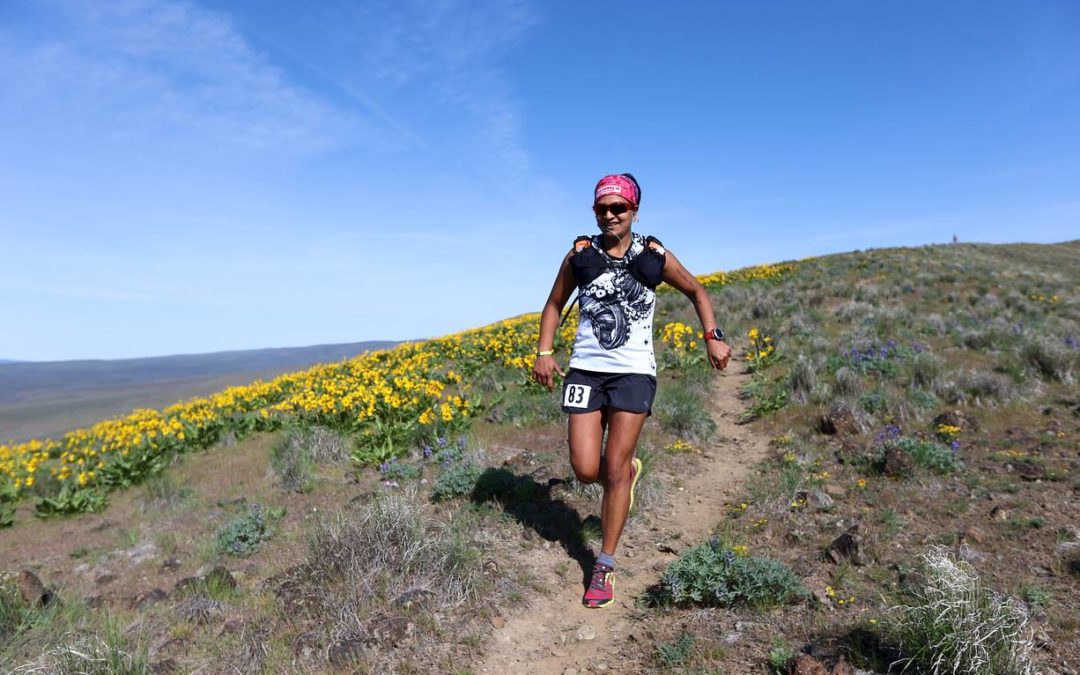 The Rise of Ultra-Endurance Sports

Reprinted with permission from terrain magazine

Four years ago, Shalini Kovach experienced a proverbial ah-ha moment. Kovach, who had made a career in fashion design and merchandising, was working with one of her biggest accounts when she overheard a woman complaining about the results of a recent eyelift. The conversation catalyzed an objective examination of her world — a “whole world of Prada and Gucci,” as she put it — and made her realize that perhaps she was chasing a dream she didn’t really want.

“I just got to a point where I started questioning who I wanted to be and where, in five years, this path was going to take me,” Kovach said.

She quit her job and, to give herself some space from the chaos of being a mom — she and her husband, Brad, the editor/publisher of Terrain magazine, have three kids — started running. That same year, she completed two half marathons and a full marathon.

“And that was it for me,” she said of marathoning. “I hated running on the roads. I was always chasing minutes and seconds. That was something that turned me off on a personal level.”

At the invitation of some friends in the ultrarunning community, she entered the Frozen Gnome 50K in Crystal Lake, Illinois. The race covered more than 30 miles of mud and melted snow in a series of 6-mile loops.

Kovach had found her calling.

Within a year, she signed up for her first 50-mile race, then a 100-mile. Most recently, she completed the notorious Western States 100-Mile Endurance Run, the world’s oldest 100-mile race — and one of the toughest.

“There’s something eerily romantic about running all night,” said Kovach, who is the founder of St. Louis-based Terrain Trail Runners. “The sun goes down and the sun comes up…and you’re still running.”

Epic Challenge
The idea of running 50 or 100 miles in one fell swoop is slowly shedding its freak show persona. Bestselling books like Christopher McDougall’s “Born to Run” and films like “Running on the Sun,” which chronicles the infamous 135-mile Badwater Ultramarathon in Death Valley, have thrust ultrarunning into the spotlight — or at least close enough to make an occasional cameo.

Still, documentaries don’t automatically translate into registration forms. After all, it’s not just the distance that’s extreme in ultramarathons: it’s the conditions. As if the logistics of running for 24 hours straight aren’t tricky enough, many ultramarathons take place in the mountains, where temperatures can soar during the day and drop below freezing at night. Courses gain and lose thousands of feet in elevation via soul-crushing ascents and treacherous downhills. The terrain is often riddled with ice, snow, mud, rocks and creek crossings. Injury, illness and the occasional wrong turn are almost guaranteed — especially at night, when the trails are enveloped in darkness.

No matter how you spin it, running 100 miles is a hard sell.

Why, then, are more and more people choosing running’s interpretation of masochism over the branded swag and band-at-every-mile fanfare sweeping the traditional running world?

“I think that in today’s society, which inundates us with media and empty content like reality TV shows, people are drawn to the utter reality and epic challenge of covering long distances on foot in beautiful, natural places,” said Karl Hoagland, whose publication, UltraRunning Magazine, has seen a 10-percent increase in circulation over the past year alone.

In other words, the increase in participation can be seen as a response to the increased commercialization of not only road racing, but our daily lives. Hoagland noted that there are currently more than 150 100-mile races in North America, with new ultra races popping up at every turn.

GO! St. Louis, the local behemoth behind such races as the All-American 5K and its eponymous spring full and half marathon, recently added a solo division to its popular KT82 Trail Relay. Individuals who want to run the ultra distance follow a modified, 67-mile course along the Katy Trail. Mona Langenberg, president of GO! St. Louis, said the organization took note of the increase in runners seeking the challenge of ultramarathons and that adding an ultra option was a natural step.

New Beginnings
Tommy Doais, a member of the St. Louis Ultrarunners Group, or SLUGs, sees ultramarathons as a way to unplug from the chaos of a hectic, digitalized world. Doais, who works in construction, began running in his 30s. Like Kovach, he was quickly absorbed into the ultrarunning community.

Doais said he searched the internet for good running trails and, through other trail runners, heard about the Berryman 50. He signed up, and “never looked back.” Doais even met his wife, Jen, a molecular biologist at Washington University in St. Louis, at Flatlanders, a 12-hour timed ultra event hosted by the SLUGs. Their first date was a 4-hour run on New Year’s Day.

Still, identifying as an ultrarunner doesn’t mandate a total rejection of blingy marathons and traditional distances. Rosie Smith, who has run multiple 50-mile and 100-mile races, enjoys running road marathons as well as trail ultras. She plans her race schedule to include both. Like Doais, Smith christened her ultra career with the Berryman 50. Unlike Doais, she wasn’t sold on the experience — at first.

“I swore I’d never do another one,” Smith said. “Absolutely not. It was the worst experience ever. My feet were like hamburgers. I wore cotton socks and shoes that were three sizes too small. It was awful,” she paused. “And then, three days later, I planned my next one.”

“I never really planned to run a 100-miler, but I was really intrigued by a specific race, the Mark Twain 100,” she said. “It’s on the same trails as Berryman, and I really, really love that race. I just wanted to spend more time on those specific trails.”

Lindsey Harris, who completed her first 50-mile race this spring, prefers timed races on lap (track) courses to distance-based races. Harris, who is admittedly “not a trail runner,” said that lap courses open up a sport to her that would otherwise be too daunting.

“As boring as it sounds, I find it really helpful,” she said. “The short loops allow you to know where the bathrooms are, where your friends are, where aid stations are. Having my support crew there is the only reason I can do this.”

Survival Game
Ultrarunners are universally practical — it’s one of the few shared traits that sweeps across a field of people as diverse and quirky as groups get. Food and equipment and race strategy dominate the conversation, and understandably so, considering the sport is as much a survival game as it is a foot race. But utility alone won’t cut it for a 100-mile race, during which a runner is guaranteed to hit not just one low point, but many.

“There is a very pragmatic element to ultrarunning. It’s one foot in front of the other and just keep doing what you’re doing,” said Smith. “But there’s a romantic part to it, too. You’re doing everything you can to keep going, and that’s a romantic thing to think about — just keep going so that you can be one with nature.” She laughed, “I guess that’s kind of hippie-dippy, but it’s definitely something I think about in those dark places. A lot of people say it’s kind of a church. It’s where I can find the purest part of myself and respect that.”

“For me, it’s very spiritual, very internal,” said Kovach, noting that there are moments during her races when she can see herself objectively, as though detached from her body, and know what she is doing wrong and what she is doing right.

Doais added that sometimes you get swept up in the race itself, and other times you’re overwhelmed by the experience. “And sometimes you just wish it were an out-of-body experience,” he laughed.

“In an ultra, there’s so much room to grow,” said Kovach of the ultrarunner’s mantra to adapt and overcome. “The terrain varies. Every race is so different. Even if it’s the same race and you’re going back at it, it could be completely different the next time around. You can never fully prepare. There’s always something. You just gotta roll with it.”

Perhaps it’s this element of the unexpected and the unknown that lures challenge-seekers. Devoid of pageantry and far from the cheering crowds, the solitary, unending miles present runners with the option of conquering — or succumbing to — the task at hand. It is, perhaps, the ultimate exploration of countless ah-ha moments.

And that, for ultrarunners, is a feeling worth chasing.

Ultra-Endurance: Cycling, Paddling and Beyond

“Most people consider anything over 100 miles the start of endurance cycling,” said Emily Korsch, who got her start in endurance racing “the way most people do — charity rides.”

Korsch’s first endurance cycling event was the MS 150, a two-day fundraising ride organized by the National MS Society. She soon branched into endurance mountain biking. Earlier this summer, she competed in the Dirty Kanza, a 200-mile gravel race across the Flint Hills of Kansas.

Ultra-endurance cycling events run the gamut of terrain and distance, ranging from six- and 12-hour races on a lap course to the mammoth Tour Divide, which runs 2,745 miles from Banff, Alberta, to Antelope Wells, New Mexico. Aid at events also varies. While the Dirty Kanza allows support crews, others like the Alexander 380, do not. Korsch’s boyfriend, Scott Erlandson, recently completed the Alexander 380. During several particularly nasty storms, he had to seek shelter in gas stations along the course.

Unlike the Tour de France, ultra-endurance cycling events do not have stages. “The goal is to keep going,” Korsch said, “but that’s the consummate question in endurance racing. What balance of comfortable and uncomfortable do you choose throughout the race?”

Adventure racing also offers ultra-endurance options, ranging from eight hours to several weeks. Korsch, a member of Team Alpine Shop, currently ranked No. 14 in the nation by the U.S. Adventure Racing Association, says adventure races are based on navigation and teamwork. “You often don’t know what the course is like before the event,” she said. “You’re handed maps the night before the race, or maybe the morning of. And they’re simple maps.”

It can also be a daunting one. Korsch and Erlandson offer regular adventure racing classes through the Alpine Shop, during which they answer questions about equipment, food, navigation and other critical aspects of the sport. They also host several adventure racing events at Castlewood State Park.

Shane Perrin, the founder of SUP St. Louis, has spearheaded the charge of standup paddlerboarders into the world of ultra-endurance races, entering events that had previously never seen a SUP participant. Perrin competed in the MR340, a 340-mile race from Kansas City to St. Louis via the Missouri River, as well as the Texas Water Safari, a 260-mile canoe race. Because of his efforts, many endurance events are now offering a SUP division for the first time.

Korsch said the ultra-endurance community is ultimately what spurs her on during her own races. “When you’re out there, it’s a test of self-sufficiency. It tests your willingness to keep on pedaling every single day,” she said. “I think, in that sense, I’m like a lot of people. Once you get into a community and start meeting the different people involved in that sport — really interesting people — you want to hang out with them.”