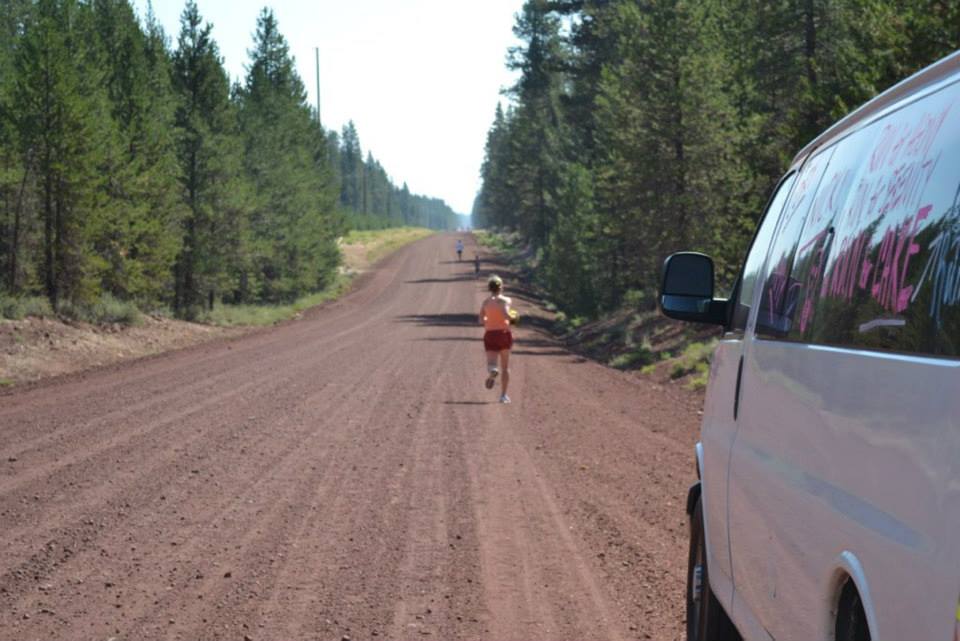 The author runs in front of her support van during the Cascade Lakes Relay.

The Foundation of Running

It’s not hard to remember those pivotal moments as a runner.  Personal records, third place finishes, and wins, if we were really lucky. Starting young, my most potent memories of running are those that happened throughout each stage of growth. An evolution that occurred from youth into adolescence, teenager to young adult, and college graduate into middle age. These vivid moments transformed my running, and my life.

Early on, passing a baton was a lesson in patience, mostly for my PE teacher.  For a bunch of young 8-year-olds, it was all about timing.  We learned to run as hard as we could around the gigantic rubber track that was usually reserved for “the big kids.”  Somehow we managed to occasionally land the baton into our teammates’ outstretched hands.  Sure, our little fingers dropped those hollow, metal cylinders more often than not, but our short legs were quickly discovering what it felt like to run fast, controlled, and free.

Then middle school came, generating feelings of awkwardness, nerves and emotional hell, and running was quickly resigned to PE.  A prize seventh grade moment included my encounter with an older acquaintance who expressed his frustration after I bailed on his invitation to cross country practice, by calling me a derogatory name in the middle of a busy hallway.  This seemed to satisfy his hormonal angst, while simultaneously crumbling mine.  After that, running took a backseat while I tried other sports and attempted to forget the earth-shattering experience I associated with cross country.

In high school, track meets are a lot of waiting around, until it’s time for your event. While most of my memories blur between sitting in the bleachers and watching hurdles, there was a magical moment that always stuck with me.  One particular meet stretched into the evening after the sun went down, and my event ended up being one of the last. As one quarter of the 4×400 team, I took my position on the track and quickly took off flying in the crisp spring air. My legs felt as though they would propel my whole body upwards in the dark night sky.  I tried so hard to replicate that feeling, and never, ever could.

And if one thing is certain, it’s that college athletics keep you accountable.  If you’re eating too much or partying too hard, running cross country isn’t going to be easy.  And as much as I thought a stint of clearing trails during the summer would help my endurance, it didn’t.  I was one of the slowest on the team, and continued to feel an overwhelming lack of confidence as a runner.  But the team bond could not be broken, and I never felt like I belonged to a group more than I did with this one. Especially during my first attempt at the beer mile.

Incredible things happen once your studies are complete, and you begin to entertain thoughts of an adult life.  Running marathons built my confidence when nothing else could. Training gave me purpose when life had none. And a running community encouraged me when times were tough.  I’ll never forget how hard I ran to qualify for the Boston Marathon, or how the muddy hills of my first 50K made me realize what an incredibly tough sport ultrarunning really is.  But just like I learned how to have fun running and that sometimes fear can make us stronger, I also realized that there will be unforgettable moments and special bonds to share with others.  Little did I know all of these things would create a foundation for running long distances, and the ability to push myself to limits beyond what I could ever have dreamed of.