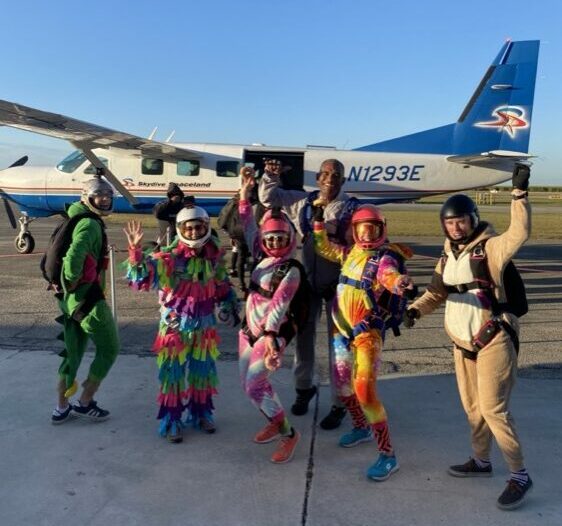 Three years ago, I made a goal that started out as a simple pipe dream. During the fall of 2018, I not only started training for my first 100-mile race, but I also got my skydiving license. Around this time, I heard about a race called the Skydive Ultramarathon, the only race in the world that starts with a skydive before running a 100-mile race around the dropzone. Runners literally skydive into their race. I became infatuated with the idea, even more so after I was told that skydivers do something special for their 100th jump. It was then that I told myself I wanted to become the first person to hit their 100th skydive followed by running 100 miles. 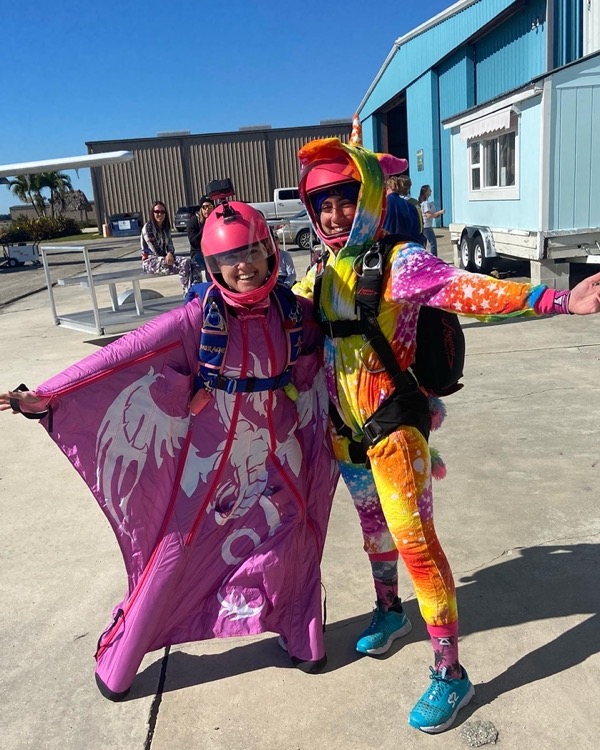 This was a 3-year-long journey as I pursued an accelerated nursing program before moving across the country from New Jersey to Arizona to start my career as a child psychiatric nurse. I primarily jumped at Skydive Arizona and Buckeye, grinding out jumps whenever I could as the race date approached on January 29, 2022. It took a lot of work as training and my job are both priorities, and I would run 80-100 miles a week in addition to working 13-hour, overnight shifts. Additionally, I could not do this alone and needed the best crew possible — my friends Matt Zaleznik, Sarah Glass and Lucien Boulet acted as my ground crew. However, I needed a rock star sky crew as well to help me organize the most fun 100th jump possible. I took a chance by messaging an extremely badass Florida-based female skydiver named Robin Moore. I had been following her on Instagram for a while, as her adventures always inspired me. Robin is a Miami-based ER doctor, a skydiver, BASE jumper, wingsuiter, has climbed the seven summits (summitting Everest twice) and is a plane and hang-gliding pilot. I knew if anyone could help me organize this jump, it would be her. She told me she was in, and we started formulating the wildest ideas we could think of.

The plan? To do a glitter, donut, unicorn onesie jump. Let me explain because it’s as ridiculous as it sounds. We would grab a group of jumpers, all dressed in colorful animal onesie costumes and skydive together while eating donuts mid-air. Robin’s parachute would be packed with pounds of glitter before being deployed, causing an explosion of color in the sky. It sounded like the most absolutely insane, complex idea ever and before I knew it, race day arrived. Excitement was coursing through my veins but so was apprehension, as we only had one shot at this 100th jump. 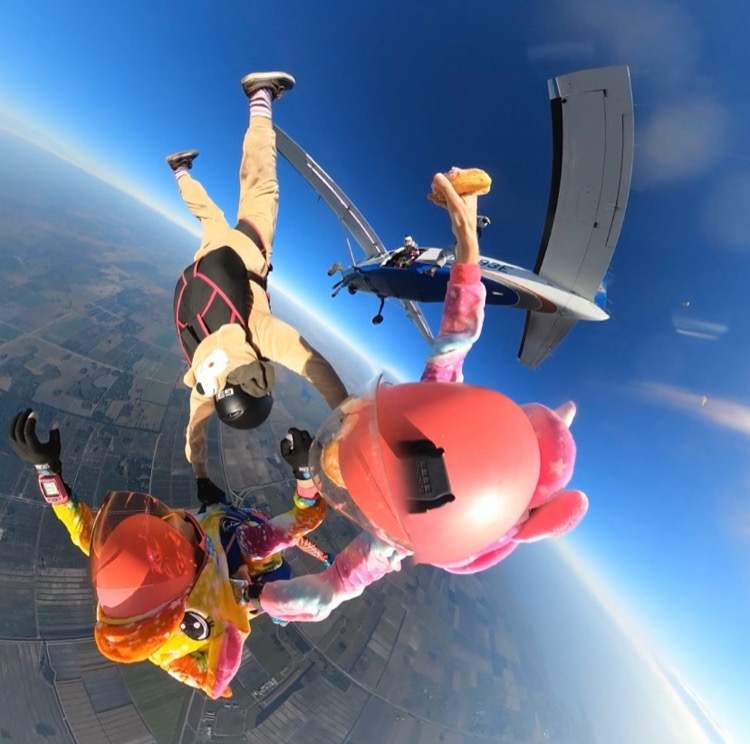 On Saturday (race day) at 7:30 a.m., the first load of skydivers went up, and Robin had been kind enough to lend me her beautiful Mirage skydiving rig, which she had voluntarily packed with $150 worth of glitter from Michael’s craft store the day before. We rounded up six skydivers for this jump, all of us wearing a combination of magical creature onesies with donuts in hand. Before I knew it, we approached full altitude, I made the count and we all jumped out together, a few of us linked hand-in-hand. At 5,500 feet it was time for everyone to fly away from me with the exception of two jumpers, one being Robin who would film my glitter deployment around 4,000 feet. After I pulled, a burst of glitter shot through the sky which I was told could be seen by all the runners and staff on the ground. We had officially done it. My friends had successfully turned me into a human glitter cannon. Now, for the race.

What is so amazing about this 100-miler is that because there are staggered start times due to many loads going up and flights rely so much on the weather, you are allowed to start your race at any time, as long as you finish by 3 p.m. on Sunday. I made sure to start by 9:30 a.m., so I’d have enough time after landing to change, watch the video recap with my friends and mentally get into a zone. The course itself is officially 101 miles as promoted on the website (14 loops, each one is a bit over 7 miles). Although it is technically a flat course, that can be deceiving as the majority is run on unpaved, overgrown brush, sugar cane fields, trail and sand, which made things tricky at night. My watch had me at 50 miles in 8:31 (with the first 25 in 4:05). But when night fell, watching my footing more than anything was key, and at times, I found myself completely alone. It was 30 degrees and the only light came from my headlamp and the stars above. My friend Lucien kept me company during the darker loops, helping me push on. Matt and Sarah manned our camp and provided me with everything from freshly made quesadillas to warm clothing as I came around each loop. Robin, along with some other skydivers, came to cheer me on as well. Around 5 a.m., after the most adrenaline-filled day of my life, I crossed the finish in 19:40, winning the entire race. But it wasn’t over. After my crew met up with me and the race director handed me my award, I received a pie in the face courtesy of Robin. It’s tradition in the skydiving world to get pied after hitting your 100th jump, or in my case, 100 miles. I felt a wave of emotion consisting of everything from relief to genuine happiness, as we had just made history as a team. 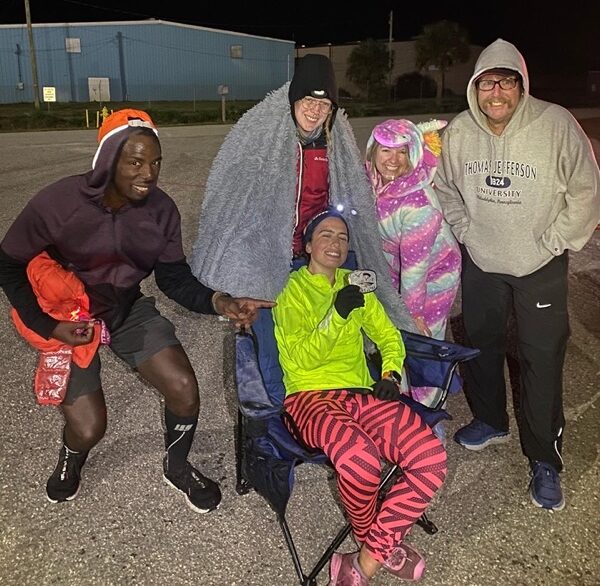 Rachel and her 100-mile crew at the finish of the Skydive Ultra. Photo courtesy Rachel Belmont.

More important than any win or time that weekend, this race curated a fire in me again and taught me the real purpose of running with joy, which is something I feel athletes, including myself, can easily take for granted. It was also a beautiful celebration of love, teamwork and friendship: Matt had taken time off of his busy medic job to pick me up from the airport the day before and be my crew chief, Sarah drove for hours to provide me with all the support and love, Lucien for pacing me in the middle of the night when I needed motivation the most, Robin for lending me her rig and going absolutely above and beyond for this jump, the rest of the people on our skydive, Eric the Skydive Ultra RD, the staff and DZO at Spaceland Clewiston for allowing this to happen and all my other friends and family for the support. I am truly thankful for the selfless people in my life, who believe in and support me even when it is challenging to do it myself.