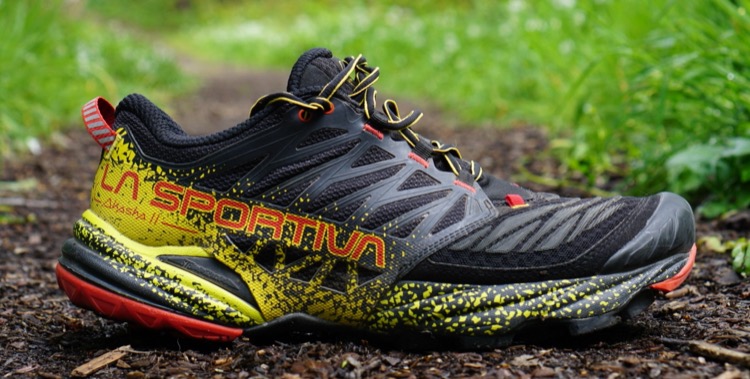 La Sportiva has its origins in mountain performance, and the Akasha has been closely associated with La Sportiva athlete Anton Krupicka, who has become just as prominent in recent years for free-form excursions in the high country as he was for racing ultras back in the early 2000s. The original Akasha earned a reputation for combining protection and performance, and this spring’s updated version carries over the underfoot elements of the previous edition with a new upper designed for increased durability and breathability. The Akasha is one of the more cushioned shoes in La Sportiva’s lineup, intended for long runs or ultra-distance races with rough terrain. Krupicka calls the Akasha his “go-to” shoe due to its overall versatility, and he wore this model during his much-publicized return to racing at the 2021 Leadville 100.

The major update to the Akasha II is in the upper design, with a modified mesh that offers a combination of durability and breathability. Its design utilizes a single mesh forefoot layer that continues into the tongue and extends down either side of the midfoot toward elastic tongue gussets that surround your foot like a midfoot strap. At the back of the shoe, the heel collar extends forward bilaterally into a lacing system made up of TPU overlays, creating an exo-skeleton of webbing with numerous mesh windows aimed at allowing air flow for improved breathability. The overall result is an impressive amount of ventilation given the focus on protection, durability and foot lockdown. By no means is this shoe cool and breezy, but considering it utilizes several layers (tongue/gussets underneath the TPU exo-skeleton) the fact that it does not run hot is an accomplishment. 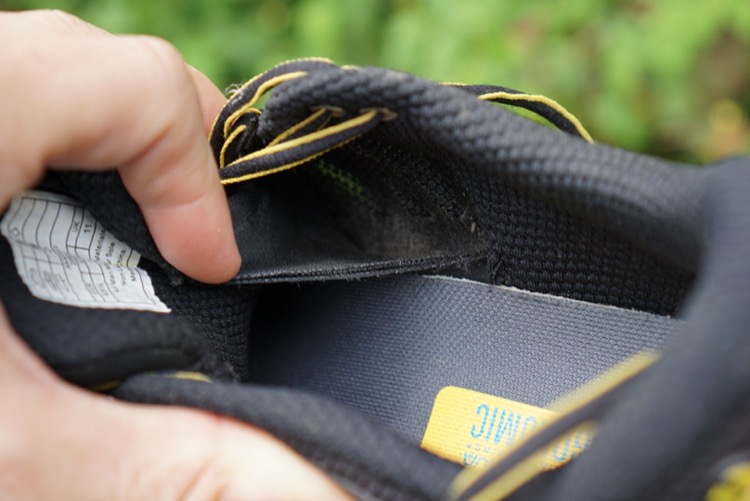 Additional protective elements in the upper are seen in a stiff TPU toe cap, a thin strip of suede-like material connecting the toe cap to the midfoot webbing, and reinforcement of the forefoot mesh with dynamic adhesive patches. The heel counter is firm along its base and higher up along either side where the laminate covers, however, it has a notch down the middle of the back that consists only of mesh fabric; this created a snug heel while also reducing potential irritation to the Achilles tendon. 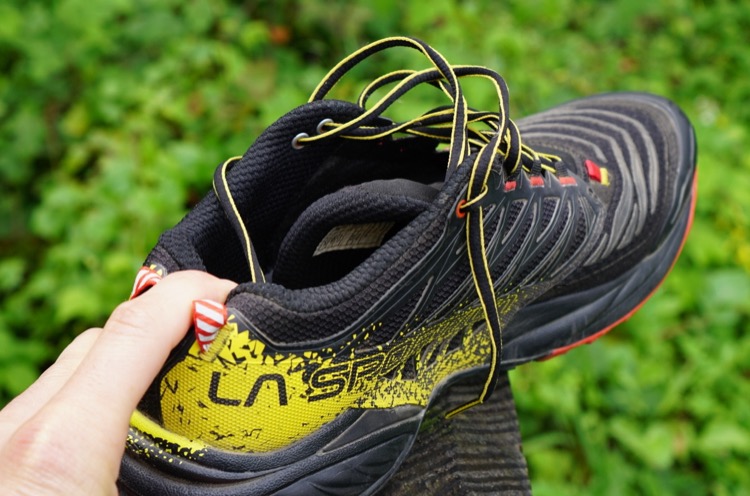 We found the overall fit fairly snug in terms of width, particularly in the forefoot, and on one of our first long runs we experimented with the lacing to provide a bit more space. The forefoot felt far more comfortable after re-lacing these shoes starting at the second lace loops and bypassing the lowest loops. This allowed more expansion of the mesh toe box without sacrificing fit. While the modified lacing did improve the comfort, we still found ourselves wanting more space for foot expansion on longer efforts (over 2 hours). Presuming the fit works for you, the material and build quality of the upper have been impressive for over 100 miles of testing and are suited for long-term durability. 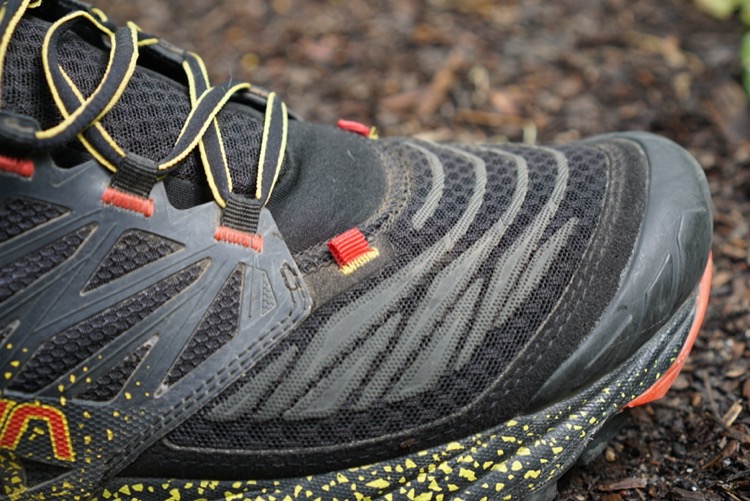 Skip the bottom two eyelets for a roomier fit

Fans of the original Akasha will be pleased to know the midsole and outsole basically remains unchanged. The midsole compound is dual-injection MEMlex EVA, which provides underfoot cushion and protection but runs more on the firm side. The comfort factor is increased with a 3mm EVA layer underneath an Ortholite insole, giving a soft feel next to the foot while the MEMlex provides strong responsiveness. Relatively large stack heights combine with an STB system of TPU inserts through the upper and midsole to cradle the foot and provide more control on technical terrain. This setup makes the Akasha II very versatile, with ample cushioning for long mileage, good energy return for faster efforts, and solid stability on irregular terrain. You sacrifice some ground feel, but with the benefit of rolling like a tank over trail hazards like roots and rocks with minimal discomfort. Transitions from heel to toe are enhanced by a slightly curved Trail Rocker geometry that helps the shoe roll forward on impact; the curve isn’t as pronounced as on other models we’ve used, but it works well as intended. 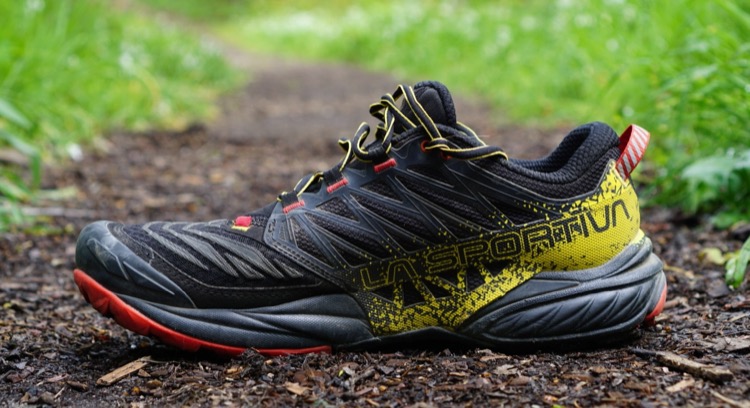 The outsole is a full rubber FriXion XT 2.0 with numerous 4.5mm arrow-shaped lugs. Traction provided by the outsole was ample enough for confidence in muddy terrain, climbing steep dry trails or descending gravel roads. Despite the aggressive lugging, the full rubber outsole transitioned easily to roads without feeling clunky or cleat-like, and the rubber has shown minimal signs of wear after 100 miles of running on both asphalt and trail. Between the thick midsole and aggressive outsole, the Akasha II is an impressive mountain runner, but might actually be overkill for runners who don’t frequent high mountain scree or super-technical terrain on a regular basis.

One important consideration when shopping for the Akasha II is that similar to other models in the La Sportiva lineup, the sizing runs small. We sized up by half on the US equivalent size scale, which worked well. Akasha II sizing is similar to the Bushido, Mutant, Jackal or Karakal from La Sportiva, so if you have a comfortable size in those, you can use the same for the Akasha II, but if you are new to the brand, plan to go up from your normal size in order to get a similar fit.

The La Sportiva Akasha II is available in men’s and women’s versions at www.sportiva.com. 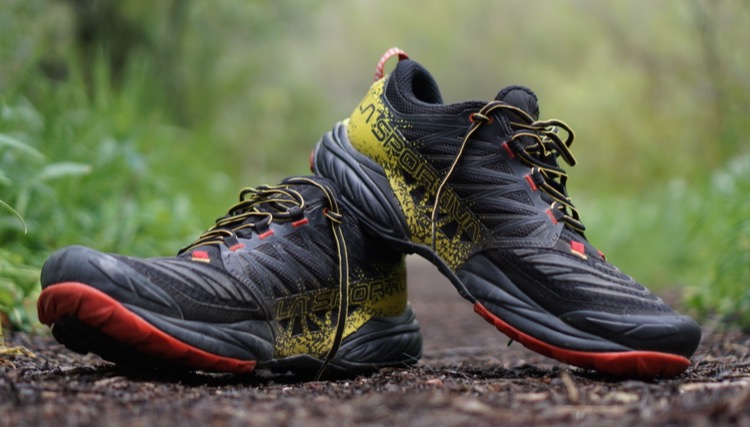