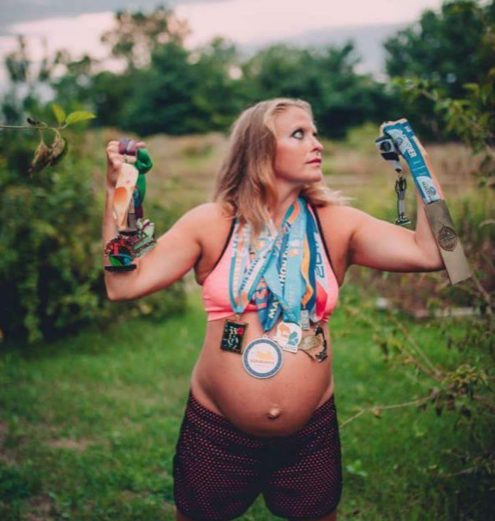 Guest Author 09/03/2018
By Stephanie Allen
I was 36 weeks pregnant when I ran the North Country Trail Run 50-mile on August 27, 2017. I trained on mainly road and the course was single lane and very technical. Even though I knew it would be a challenge, I had been cleared by my doctors, so I was up for the challenge to prove you can do anything you set your mind to.
I was up at 4:30 a.m. to do my prep, foam roll and stretch. My breakfast was a Tailwind shot that I invented, a Honey Stinger waffle and a Clif bar. I ate a lot because I knew I wouldn’t be hungry much and with my slowed pace, I wouldn’t stop much to stay within the 14-hour cutoff. I wore my Fitletic hydration belt and another belt with my Tailwind shots on top of my big belly and my Fitsplint calf compression and knee compression to keep my leg and pelvic pain at ease. I really just looked like an overstuffed mummy.
My husband drove me to the start line and I was greeted by my good friend Susan who drove all the way up to see me start, as well as so many other runners who have followed my insane journey on Instagram and Facebook. It was so nice to have so much support. I was not nervous. I had trained and was cleared by doctors. I was ready. 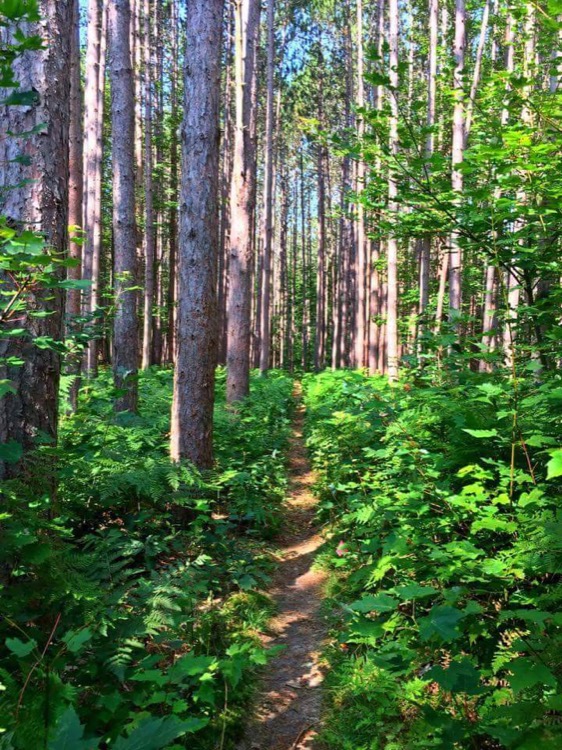 The starting gun went off late because of lack of sunlight. Everyone had a powerful headlamp but I only had my little dollar store headlamp that really did nothing. I kept up with a 12-minute pace for about three miles until I had to step aside. It was a single-lane path the whole race; not being a trail runner, that really didn’t help me.
I fell for the first time in my running career at mile four. I made sure not to fall on my stomach and bounced back up like a cat even though those running behind me asked if I was ok. I was, thankfully. By mile 10 I had fallen seven times. I took a breath and had a heart-to-heart with myself: “Ok, if I fall one more time I am tapping out of this race.” I figured since the course was two loops, my backup plan was to finish the marathon and call it quits. I never fell again, but did trip a bunch.
Before the race, I planned out each aid station. I knew they were every three to six miles and since I haven’t done drop bags before, I would rely on them the whole race. Oddly enough, I didn’t feel like I had to pee. I mean, I was super pregnant, so why wasn’t I? So after the second aid station I said, “Next station you need to try.” It took until aid station five that I was able to go with no waiting lines. Each aid station had so much to offer! Ramen noodles, pizza, coke, watermelon, etc. All were well stocked and had great volunteers. I found that watermelon tasted delicious and worked well for me. I didn’t eat much at each aid station because I wasn’t hungry and was fighting for time.
I finally got to the second loop and almost went the wrong way to the finish because there weren’t many signs. Thankfully I was directed the right way for the second loop. As soon as I got into the second loop I said, “That was a piece of cake and it’s all down hill from here.” Really, it was. I stopped at every aid station to fill my water bottles and grab GU or watermelon. I normally don’t eat much, so that is why I love Tailwind and invented my own shots I take, but being pregnant, I knew I needed to eat.
Cell reception was horrible the whole “race-cation.” I sent texts to my husband every 10 miles with no response. I figured he was just busy with the three kids. I received a text from a friend asking if I was the one that went into labor. I was like, “What?! NO. I feel great.” Evidently there were three pregnant women racing: one in the half, one in the marathon, and me in the 50. Since the other two had finished their races and I was still out in the woods, it was assumed I was the one in labor. None of us went into labor so it was a big misunderstanding. 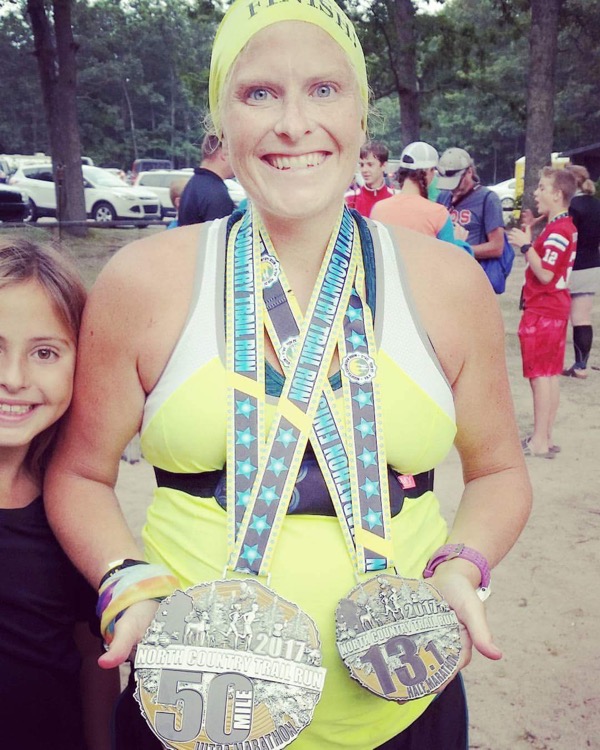 The second loop was my most fun! I didn’t have competitive marathoners to move over for (that’s part of why I fell). I could just be me. I loved being by myself with just the trees and land. Since there was that labor scare, my family waited for me five hours early and had a search out for me at every post. Seriously every single post I went to I heard, “Yup, she is here and good to go.” Of course I joked with them saying my placenta fell out at mile 12. I found out too after I left the fourth aid station a bear had showed up, so people really freaked out.
I tried to run/walk the last 10 miles. My legs were tired but my mind was clear and energized. This was the best my mind and body had ever felt for a race. By mile 38 my watch had died, so I had to rely on my step counter Garmin to calculate how much further I had and how fast I was going. At each aid station they asked how I was and I asked how much farther to the next station.
At several points I thought I was lost because I was all alone in a huge forest. I prayed a lot. When I saw the sand dune near the end, I cried. Not because it was hard, but because I knew I had one mile left to see my babies! As I reached that field to the end I saw my kids and my mom waiting for me. I cried, but when they came closer I said, “Don’t get in my way. I need to finish and don’t want to fall on you.” My kids and mom finished with me. My dad, who was battling cancer, hugged me. My husband made me sit down. As soon as I finished, my husband then received my texts. I did it! I ran my first 50-miler at 36 weeks pregnant! 12 hours and 45 minutes. I wasn’t last either!
I ran a half marathon, six marathons, my first 50k, and my first 50-mile while pregnant with my fourth child. It was such a learning experience and I want more women to learn from it. Being pregnant is a gift! We women are so strong and can do so much. Legend Stryder Allen was born six days early and perfectly healthy. I just finished the North Country 50 again this year, but Legend sat this one out. And I’m already signed up for the 2019 race! 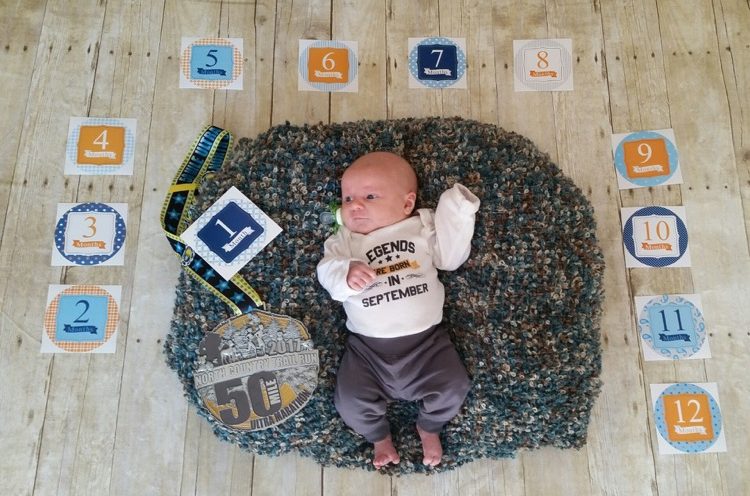 I remember seeing you finish last year and thought how amazing and inspiring. That’s so awesome! I will be up at NTC 2019 but doing the marathon. Maybe I will see you there! Good luck with the rest of your running!

Congratulations on your first 50 miler! You did fantastic. Hopefully labor was a breeze compared the the run, lol. Thanks for being a great role model to other moms and non-moms!

I remember you from the race. Im glad to see you and your baby are doing well. I remember the kids working the aid station thinking they were going to have to deliver the baby.