From its inception, the Run Rabbit Run 100 has strived to be an innovator in the sport of ultrarunning. Race Director Fred Abramowitz is something of a visionary; he imagines the state of our sport many years into the future while trying to promote and support our top athletes as much as possible in the here and now.

The most disruptive aspect of Run Rabbit Run happened right from the start, with the creation of substantial prize purses for top finishers, distributed evenly among men and women. The race offers the highest prize purse of any ultramarathon in North America; this year, the men’s and women’s winners are guaranteed at least $12,500.

This year the race introduces a whole new category of competition and prize money with the debut of the Rabbit Cup. It’s a competition consisting of 10 teams who each pay $10,000 to buy a slot in the contest plus accommodations for the team prior to the race. Each team will consist of three runners, with one male and one female runner’s times in the 100-mile event combined to determine the fastest team time. First prize for the winning team will be $50,000, with second awarded $20,000. Third through sixth places will earn $15,000, $10,000, $5,000 and $3,000, respectively.

In addition to the $100,000 Rabbit Cup purse money awarded to the fastest teams, all runners will also be eligible for the event’s existing $65,000 individual prize money. For example, if the female winner is also on the winning Rabbit Cup team, she will earn the $12,500 for the individual win plus her share of the $50,000 Rabbit Cup prize money. It could end up to be a very lucrative day for one or two fortunate elites.

Teams that purchase a slot do not need to name their runners until September 1, which gives them time to see who is racing well or who is injured through the summer race season, and then put their best possible team on the start line on September 14. The race committee has been working with domestic as well as international teams in the buildup to the race, and the Rabbit Cup should offer a new and exciting component to what is rapidly becoming one of the premier mountain 100-milers in America.

As for the state of our sport in the future, Abramowitz has a vision for how that might develop as well – and he has graciously put his thoughts on paper for us to share. We found his ideas to be interesting and thought-provoking, so we’re curious to hear your thoughts at the end.

Today’s media consumer is inundated with virtually limitless entertainment options. There are hundreds of television channels, digital streaming, on-demand viewing, YouTube, Twitter, Facebook, podcasts and countless social media outlets, all competing for consumer attention. Sponsors of today’s athletic events, a model based on “counting eyeballs,” must compete with all these entertainment entities, and this is as true for those sponsoring ultra events as it is for any other sport.

Because ultrarunning is still a fringe sport – albeit one whose profile has increased enormously in recent years – opportunities for growth are great. What has not yet occurred is a clear sense of how sponsors and those who care about our sport can take advantage of its inevitable growth and direct that growth in a positive way. This involves looking beyond the “banners at as many races as we can” approach that characterizes much of today’s ultrarunning sponsorship and also involves looking beyond the “let’s not change anything” mindset that characterizes many of the old-time participants. Our sport is growing and change is inevitable. All of us who love this sport must begin viewing ultrarunning in the context of the larger sports and entertainment markets. 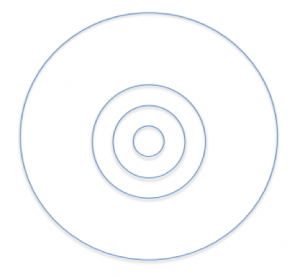 The innermost circle represents the die-hard fans of ultrarunning – those who avidly follow the sport, know our participants, and will stay up and track a 100-mile race through the night. They subscribe to Ultrarunner Podcast, iRunFar, and UltraRunning magazine (which has a paid circulation of approximately 10,000) and may attend a race as a spectator. Most of these fans are ultrarunners themselves. The number of these die-hard fans is quite small, probably numbering less a few thousand.

The next inner circle represents the broader ultra and trail running community. They are either ultra or trail runners themselves, and while they don’t fanatically follow the sport, they may be familiar with the names of the elite runners and the major races and will watch and follow an event if it’s presented properly. They enter trail races and frequently run off-road. While their number is larger than that of the die-hard fan, their number is still fairly small, in the range of 50-100,000. Their number is growing rapidly.

The third circle represents the greater running community, the people for whom running forms a significant part of their lifestyle. They may subscribe to Runner’s World (which has a U.S. circulation of approximately 700,000), and they consistently participate in races. Their number is substantial; about 550,000 individuals in the United States ran a marathon in 2016, and over 16 million ran some form of organized road race. They are increasingly being drawn to ultra and trail running as an alternative to running on roads and as they seek the new frontiers beyond the marathon distance.

Finally, the outermost ring, by far the largest, represents the general sports fan, the “sports junkie.” They will watch any competitive sports event of even casual interest to them, whether the major professional sports, the Olympics, World Cup, Tour de France (estimates as to how many watch the Tour vary from 500 million to over 3 billion worldwide), to the Ironman World Championships. If they come across a Spartan Race or Tough Mudder event on television, they’ll pause to watch it.

To date ultrarunning has marketed itself primarily to the innermost circle – the die-hard fans of the sport – but has scarcely attempted to engage those even in the second circle. As for the outermost two circles, the sport has more or less ignored those potential new fans who have yet to form any connection to ultrarunning. Those outer rings constitute the untapped opportunities for sponsors.

Consider the third outermost ring – the millions of Americans who consider themselves “runners.” They purchase millions of running shoes, socks, apparel and other running-related products. They belong to banks, join health clubs, purchase insurance, buy cars, backpack, camp and have far above the average median household and disposable incomes. At one time millions of them tuned in to watch Bill Rodgers and Frank Shorter run the Boston, New York City and Olympic Marathons, and track and field was featured regularly on network television. But today, with the ascendance of African runners who dominate road racing, and with track and field plagued by never-ending drug scandals, Americans lack the running “heroes” they can relate to.

Ultrarunning, with its cast of young, attractive, and wholesome athletes, perfectly fills the void. Most of our elite runners are well educated and articulate. A few are brash and outspoken and do well on the “cool” scale, while others are self effacing and modest. As a rule, ultrarunners are uniformly likeable, they disdain cheating and rarely get in trouble with the law. Most know that competing in their sport can be an unpredictable endeavor and almost all of them have had bad days – sometimes spectacularly bad ones – and they show good sportsmanship. And many ultra events offer breathtaking scenery in interesting venues to rival that of the Tour de France.

Fifteen years ago, NASCAR, Professional Bull Riding and professional poker were fringe sports, with virtually no casual followers. Today millions watch those events, despite the fact that the actual number of participants is miniscule. Ultrarunning can learn from these events: it needs new ideas, new ways of attracting the already committed runners as well as the casual sports fan to our terrific sport.

Secondly, our sport needs to promote the remarkable accomplishments of everyday runners, and not just the elites. The late Jim McKay of ABC Sports once said he could engage any fan in any sport if he could make the fan care about the participant – and there’s no better sport than ultrarunning to highlight the struggle of individuals. Our sport consists of single mothers, cancer survivors, survivors of addiction and abuse; every event consists of dozens of individual stories that make for a fascinating backdrop and we need to learn to better promote those stories. Think of the human-interest stories you see during every Olympics; ultrarunning can match or exceed the dramatic impact of the best of those.

A recent YouTube video provides an excellent illustration: REI Presents: How to Run 100 Miles by Brendan Leonard features two novices attempting their first 100-mile run, at the 2017 Run Rabbit Run 100-miler. The video is funny, informative, deeply inspiring…and it features nothing about the elites who were competing in the event. It is an “everyman’s” perspective on what it takes to run 100 miles. To date the video has garnered almost 3.5 million views on YouTube alone. Very few of those viewers are in the “innermost circle” of ultrarunning; they represent the casual sports fan who presents rich opportunities to the right sponsor who commits to marketing our sport in a media-savvy manner.

We are only at the beginning of our sport’s growth. Those of us who love it need to accept its growth and harness it to preserve what’s great about it. If we don’t, someone else will. And we may not like the way that looks.

Fred Abramowitz is the managing partner of the law firm of Abramowitz, Franks and Olsen, and the race director of the Run, Rabbit, Run 50 and 100 Mile Endurance Runs. At age 66 he has completed well over 100 ultra marathons, including dozens of hundred milers and marathons.

Call for questions or comments: