In the back of our cultural memory, it’s the home of alien encounters, government secrets, Dust Bowl refugees and the Bunion Derbies of 1928 and 1929. Dubbed the “Mother Road” by John Steinbeck, Route 66 was founded on November 11, 1926, and was once a bustling, thriving piece of Americana. In its heyday, it was one of the most popular highways in the state of Arizona, carrying over a million cars a year. Now, however, it’s riddled with ghost towns, leaning water towers and struggling curio shops dedicated to the memory of a lost time.

Last year, when ultrarunning maverick Marshall Ulrich and his wife, Heather, walked the route to raise funds for Alzheimer’s, they were moved beyond expectation. “This would be absolutely ideal for an ultramarathon,” said Heather. “It was unbelievable. It’s the longest section left of the route in the US.” They got to know the shop owners fighting for revival and the native tribes who’ve more often than not gotten the short end of the stick. “I believe it’s not just a coincidence,” added Marshall. “Some divine power pushes you in a direction.” So, on November 11, they will launch a new 140-mile ultra to pay homage this diverse heritage with hopes of revitalization.

“It’s one of the safest road runs that you can imagine,” Marshall says. “We’re gonna have four highway signs with flashing message boards.” If you can manage a 2.3-mile an hour pace, you can finish. Starting at 5,500 feet, November temps will be ideal in the mid-70s. It’s also perfect for many ultrarunners, as it’s the off-season for many races. There will also be a lot of things to do for the crew and the runners both before and after the event—the Grand Canyon, Colorado River and the party oasis that is Topock66. “We want it to be a blast for everyone,” says Marshall.

From start to finish, there will be people involved who were or are still a part of the old route. At 95, Angel Delgidillo will start the race in front of his curio shop that still houses his old barber chairs. His barber shop was one of the original spots on the route, and Delgidillo was an original member of the committee that got Route 66 its historic certification. In Oatman, April Etue, the owner of Fast Fanny’s, will man the checkpoint and aid station starting at 4 a.m. Her mother-in-law, Jackie Rowland Murray, owned the shop for 33 years and was instrumental in helping recommission route 66 in Arizona.

The Route 66 UltraRun will begin in Seligman, Arizona, and finish at Topock66, an oasis bar situated above the Colorado River. Along the way, runners will pass the Historic Route 66 Museum, the Hackberry General Store and the gigantic, green tiki head known as Giganticus Headicus. Into the Black Mountains and up Sitgreaves Pass, they’ll head toward Oatman on one of the most unique stretches of the old highway in the country. Then, they’ll drop 4,000 feet to the Colorado River and the finish.

Some of the many apparitions along the ghost highway will include: the largest dry caverns in the United States, the Hualapai Reservation, Cool Springs and Ed’s Camp—a place that was once so booming, Ed never had time to build a proper site. There’s also the delicate Monkey Paw Orchid that seemingly grows out of solid rock, hints of old wagon roads, former gold mines and movie locations from films like The Universal Soldier. 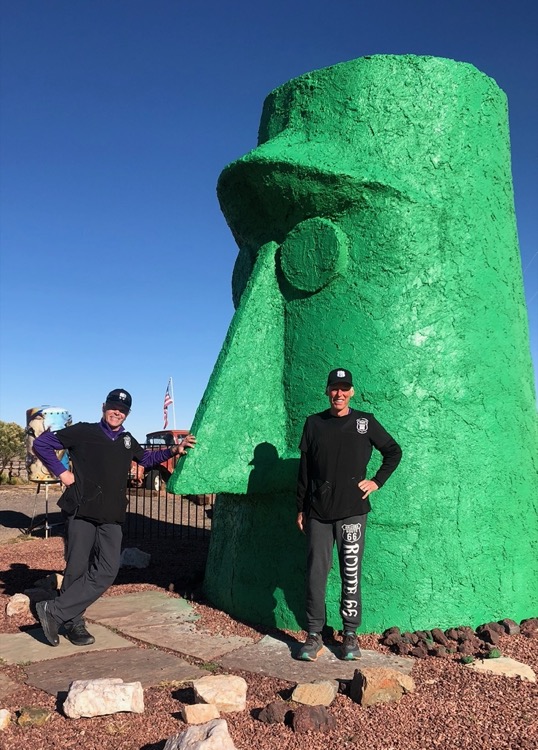 The race start also coincides with Mark “Mace” Macy’s birthday. He and Marshall, along with Doctor Bob Haugh, were part of the prolific adventure racing team “Stray Dogs.” They competed in the original Eco Challenge series from Utah to New Zealand to Borneo.

But one day in 2018, Mace faced down a new challenge: Alzheimer’s. The news was dire. “The doctor said it was very rapid moving,” according to Marshall. “He needed to get his affairs in order.” Marshall believed in a better outcome. He still does. And he made sure Mace knew he wasn’t going to face it alone.

“He goes out on the trail with me,” says Marshall. “He remembers the old stuff like yesterday. But can’t remember his grandkids’ names.” Mace is still Mace, he says, and the two have a blast. Their usual hike is a five-mile trip up Evergreen Mountain. There, they can look out on the Continental Divide. The five-mile round trip used to take an hour and a half. Now, it takes two and a half hours. “Mark is just slower. Doesn’t have the focus,” says Marshall. “But he always asks people how they are doing.”

Alzheimer’s steals the identity of individuals. It takes away their memories. Thus, the fight for Mace and many like him is not dissimilar to the plight of Route 66. For decades, committees have fought to save the old road and bring business back to those whose livelihoods depend on the route. What’s left on the route remains as a tribute to the memory of what it once was.

A portion of the entrance fees will go towards Alzheimer’s research and Route 66 restoration. When runners register on RunSignup, they can choose, but the field will be limited to 100 runners, supported by a crew of 3–4 people with a cutoff of 60 hours.

There will be an Andy Payne award in memory of the Cherokee runner who won the original Bunion Derby and a Macy spirit award in honor of Mace. The most unique award will be the Doctor Bob suffering award given to the runner who has left everything out on the road. Bob Haugh, a dogged figure, once crewed Mace and Marshall even though his back was broken in five places. “I’ll be going up and down the route,” Marshall says about the highly subjective award. “I’ll be able to tell.”

Running saved Leadville and brought new fire to Chamonix. A big ultra could make a big difference here, too—in the restoration of one of the nation’s most historic routes, and in seeing that it has a future as well as a past. “We have to look back,” says Marshall with a well-earned stoicism. “We have to see where we came from so we can move forward.”

Jared Beasley is a New York-based author and journalist. His 2019 book In Search of Al Howie was chosen by Kirkus Reviews as one of the best indie books of the year.