Topo Athletic has established itself squarely in the middle ground between minimalist design and traditional footwear construction. All Topo models boast a wide toe box for increased toe splay and natural movement of the foot, and a more secure fit in the midfoot and heel, with lightweight construction and minimal bulk. Distinctions between models are typically seen in the midsole, which vary in their stack heights as well as a range of heel-toe drops from zero to 5mm.

This spring, Topo released two road shoes that, at first glance, look remarkably similar but have significant distinctions in their midsole construction to place them in different training categories. The Ultrafly 3 is an update to a well-established everyday trainer, while the Zephyr is a new model built for moving fast with increased responsiveness. Both have identical geometry with 28mm/23mm stack heights and differ in weight by only 0.2 oz. We like the 5mm drop as a sweet spot for those who are comfortable with a natural (midfoot) footstrike. 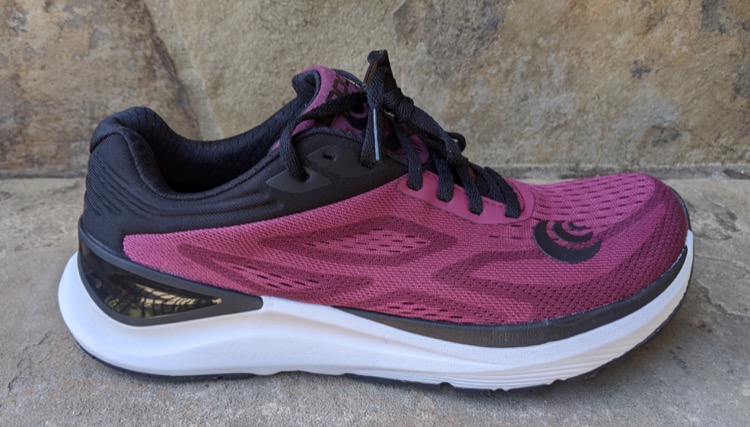 Topo Ultrafly 3
Updates to the Ultrafly 3 are designed to improve its posterior stability, cut a bit of weight, and improve overall comfort and functionality. The key change is the use of Topo’s recently developed Zipfoam midsole compound, a TPU/EVA hybrid that provides full length, lightweight cushioning and added resilience to the platform, as well as decreased compression over time compared to the company’s previous EVA midsoles. It is marketed as a “guidance” shoe, with a small medial post on the inner part of the midsole to prevent over-pronation. While it’s helpful for those who pronate heavily, this medial build-up wasn’t too much for our testers with a neutral stride, who hardly noticed it. 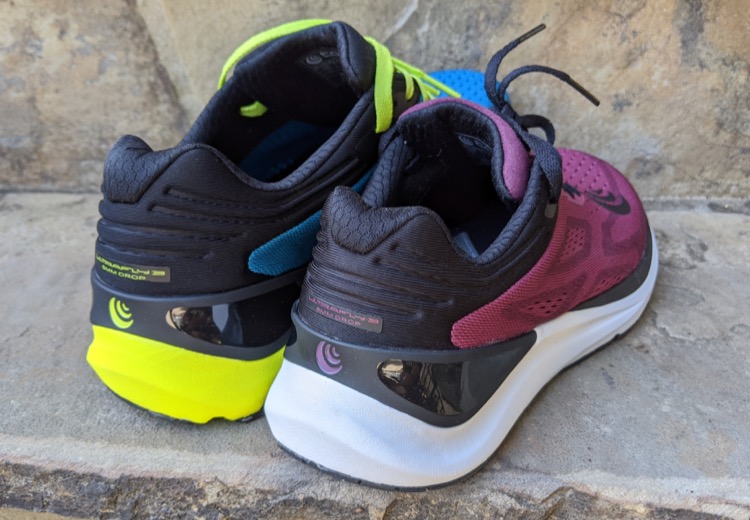 Another addition is an external TPU counter around the heel, which reinforces the heel box and cups the back of the foot snugly to prevent unnecessary movement. Molded foam around the ankle collar further improves the structure and support around the ankle. The newly designed upper is engineered with breathable mesh, which kept our feet cool even with increasing summer heat. Some overlays have been removed, which makes the shoe more streamlined in appearance and breathable but sacrifices some reinforcement around the toe box. 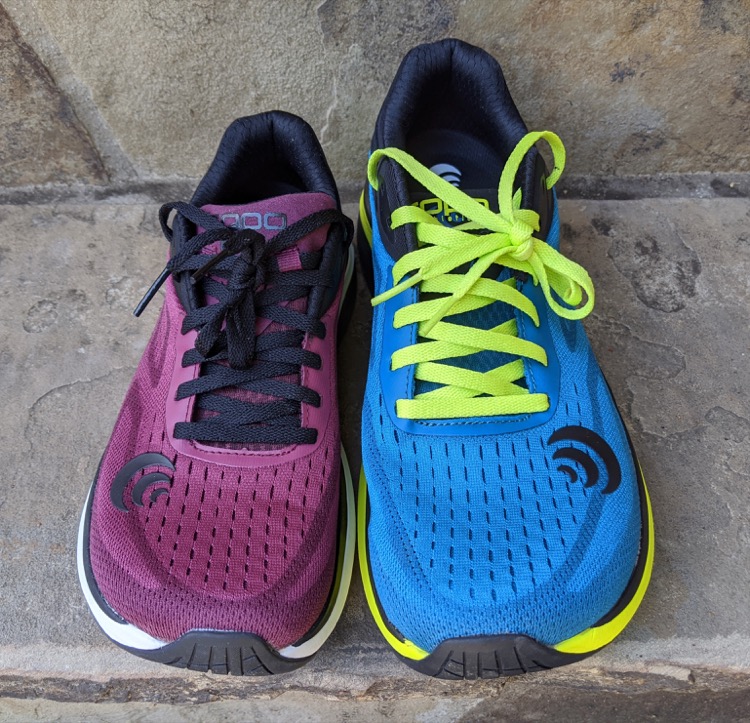 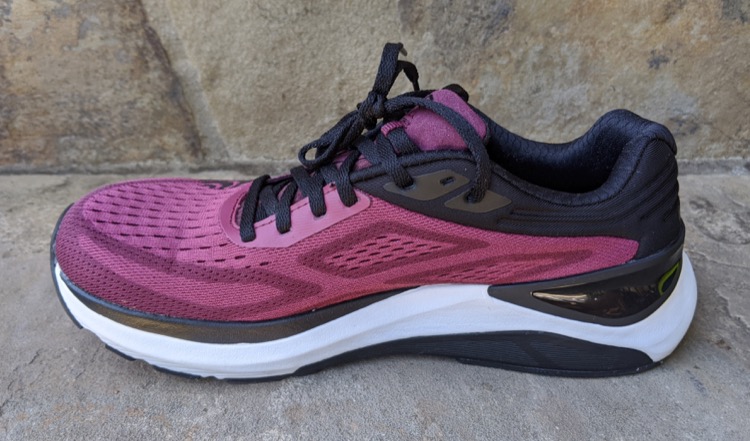 The lacing system has two loops that go through the top of the tongue, securing it in place for minimal movement during running. There is a bonus lace eyelet at the top of the shoe for other variations of lacing methods, and we found the runner’s loop heel-lock method helpful given the spaciousness of the front of the shoe. However, runners with narrow feet will still find the toe box excessively roomy.

A final update to the Ultrafly 3 is in the outsole, where portions of the rubber have been removed to make the shoe lighter and more flexible, keeping the rubber only in strategic areas to provide traction and abrasion resistance. When it comes to road running this is generally an improvement, but the new outsole does not provide quite enough grip for stability on trails. We frequently used its predecessor as a crossover shoe for light trail running, but the Ultrafly 3 is now firmly geared toward dedicated mileage on asphalt or pavement. 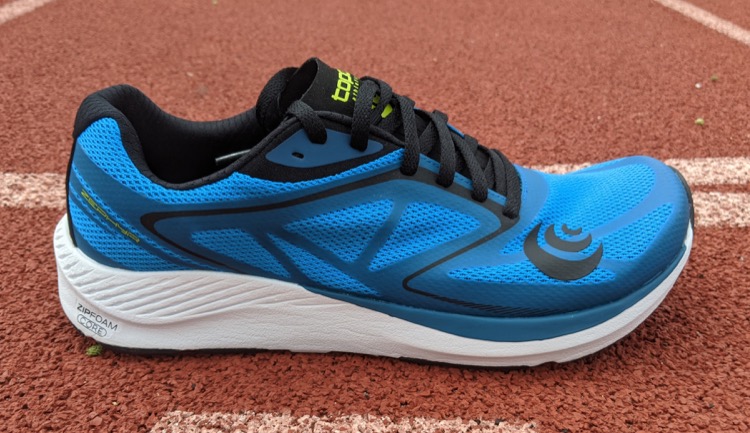 Topo Zephyr
The Zephyr is a new model in the Topo lineup that takes the basic framework of the Ultrafly 3 and injects it with a high performance element built for tempo training, speed work and road racing. The key element is a thermoplastic Pebax plate inserted between layers of the Zipfoam midsole compound, giving the platform increased rigidity and responsiveness, particularly through the forefoot. Think of it as the minimalist version of carbon fiber plates that Nike and HOKA One One are incorporating into racing shoes: you get a bit of the super-charged responsiveness, but retain a good measure of the flexibility and ground feel that Topo offers. 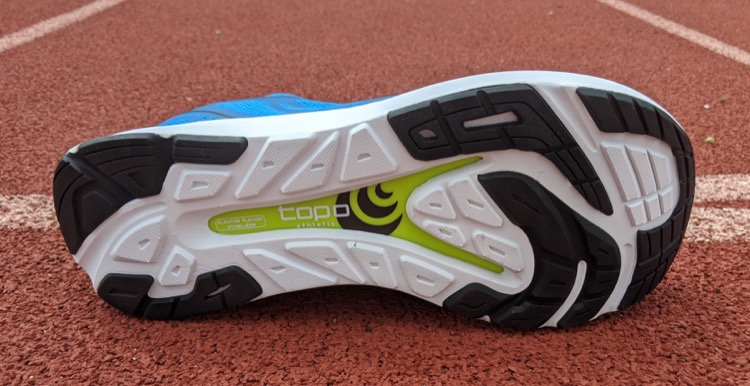 We found the plate worked as advertised when it came to running at pace. During track workouts, they accelerate smoothly at the beginning of intervals and it felt easy to maintain a quick turnover throughout. Conversely, when jogging at slower speeds, the platform feels a bit firm and dull. It’s kind of like riding a high-end bicycle: the best way to appreciate the construction is to push it up to speed, but if you’re just cruising around town it feels like any old ten-speed.

The plate also makes the shoes feel quite rigid during your first couple of runs (this is unusual for Topo shoes) which we often take on 20-milers right out of the box. The midsole compound seems to gain some flexibility over a period of time, so the Zephyrs do soften up a bit with continued use and have a similar feel to other Topo road models. 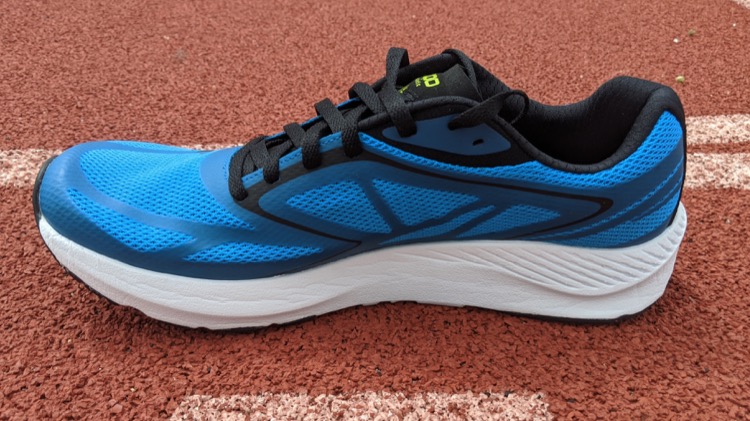 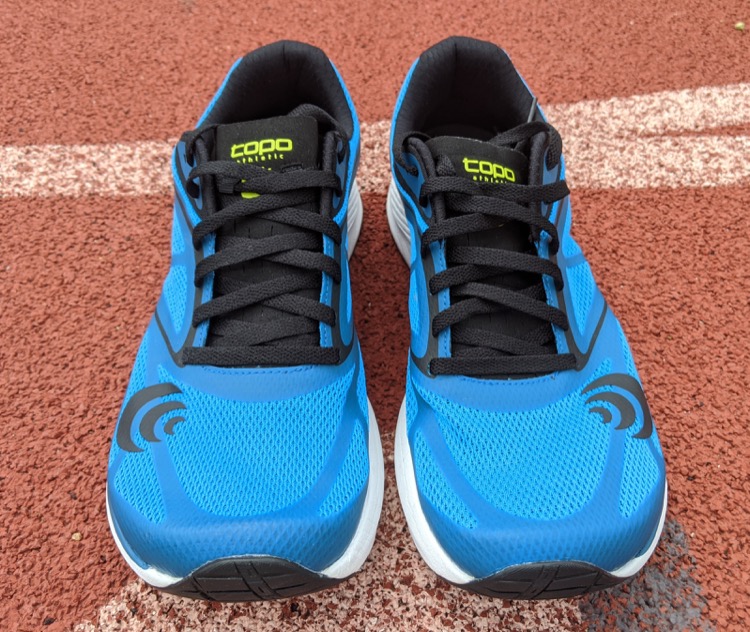 The uppers of the Zephyr are pleasantly lightweight and breathable as you would expect from any speed trainer. They are composed of the same engineered mesh as the Ultrafly 3, with a similar light TPU overlay framework. The Zephyr loses the heel TPU counter seen in the Ultrafly 3, which makes up for the added heft of the Pebax plate. Whereas the Ultrafly 3 is ideal for everyday training, we prefer using the Zephyr primarily for workouts or races when you’re looking to push the pace.

The Topo Athletic Ultrafly 3 and Zephyr are available now in men’s and women’s models at http://www.topoathletic.com.