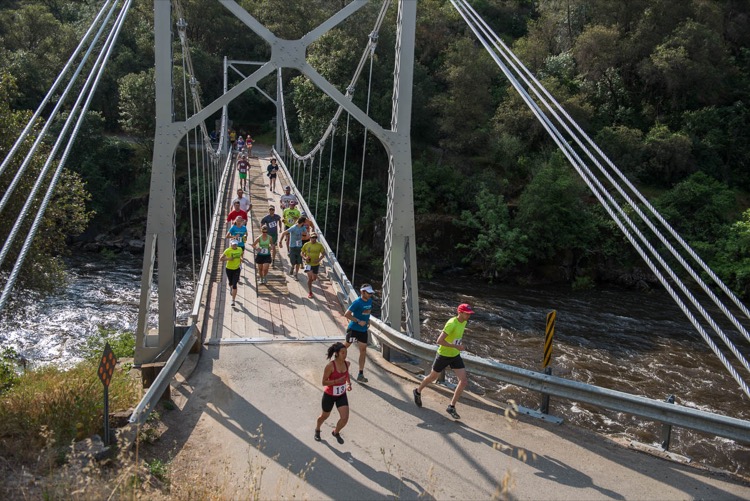 Race start on the Briceburg Bridge

PRs for Everyone at the Merced River Canyon Endurance Runs

On May 14, every single participant in the inaugural Merced River Canyon Endurance Runs set a new personal record at California’s Shortest Ultramarathon. Perhaps it was the unusually overcast day. Maybe it was due to beauty of the Merced River and the wildflowers adorning the canyon walls. It might have been the overwhelmingly friendly local volunteers. A wild guess is that it was probably because no one had ever run a 14 km or 44 km race before.

Regardless, all who toed the line at Briceburg Visitor Center that morning re-crossed the line later that day to earn the coveted finishers’ trucker cap, adorned with a logo of one the Merced’s River’s local residents—the rainbow trout. It was quite the feat for each participant to finish, considering the difficulty of the runs. Runners in both races were tasked with going up, then down,1800 feet over six miles on the Burma Grade, a historic mining road. Upon reaching the aid station near the top of the grade, some runners were disheartened to learn that they would have to go a half mile more up an even steeper side trail to an unmanned box of bracelets to prove their arrival at the turn-around.

While the 14 km race was a major blowout run on the part of Jasper “Sort Of Off the Couch” Peach in a blistering time of 1:06, the 44 km turned neck-and-neck along the hot, exposed final miles of the river corridor leading to the iconic Briceburg Bridge. Eventually, Mike “I Heart Owls” McDonald edged Glen “Need River Now” Young by 19 seconds for the win. On the women’s side, Sarah Ferguson and Cassandra Dufek both looked entirely unfazed and at ease in handily winning the 14 km and 44 km, respectively. Winners were treated to stainless steel growlers filled with local beer from South Gate Brewing.

Perhaps the most inspiring performance of the day came from Leo Calles, running in his very first ultramarathon. Calles struggled up the grade, but crushed the downhill and put in an evenly-paced effort through the event’s flatter second half along the river to finish 20 minutes before the race cut-off and DFL.

The runners were not the only winners of the day. Race Director Rob Rives is the founder of a grassroots effort called Humanity Running, which is aimed at running small scale, local events meant to benefit local causes. In this case, over $700 in proceeds were donated to the South Fork Merced River Collaborative, which works with volunteers and land agencies to enhance local recreation and conservation. The run was graciously supported through the efforts of 18 local volunteers and in-kind support from NatureBridge, the Yosemite Employee Association, the National Park Service, the Bureau of Land Management, and South Gate Brewing.