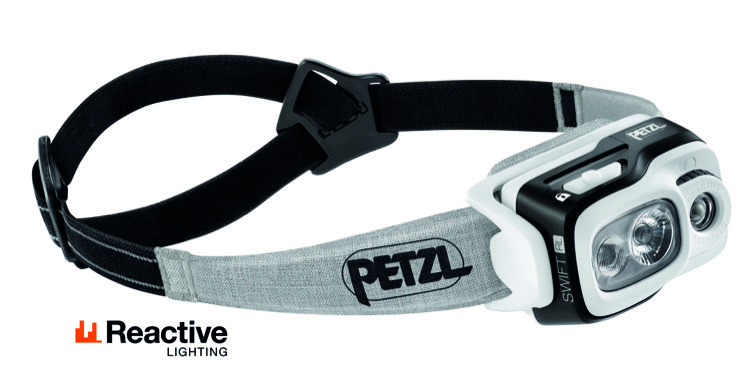 When Petzl’s reactive lighting technology debuted several years ago, we considered it one of the coolest innovations ever, and the company’s Reactik and Reactik+ headlamps became our first choice for running through the night during 100-milers. So we had a bit of apprehension in learning the Reactik line is being replaced by the new Swift RL.

Fortunately, our concern was pretty short-lived, because once we started testing the Swift RL, the improvements and upgrades became obvious. In general terms, it’s lighter weight, brighter, smarter and rides more comfortably on your head than the old Reactik+. It also helped get us through a recent 100-miler – more on that in a moment.

The good news for Reactik lighting fans is that it’s not going anywhere. The Swift RL maintains this same technology that adjusts the brightness of the lamp depending on your ambient surroundings – so if you’re running with a pack of other lit-up runners or through an illuminated stretch of road or trail, the brightness dims to save battery life. When you’re staring at your feet on lonely stretches of single track, the beam is more dispersed, but when you look up to see what that scary noise in the bushes is, the beam automatically switches to a stronger spot mode. The Swift RL also gives you the option to use standard lighting with a steady burn in all conditions.

The Swift’s battery has about 33% more capacity than the Reactik’s (1800 mAh vs 2350 mAh) and the LED bulb on the Swift is more efficient; it has greater “luminous efficacy,” which is the term used by geeks in the industry that indicates a lamp’s ability to convert energy from the battery into visible light. At similar lighting levels, the Swift outperforms the Reactik in all conditions, but it gets a bit confusing because the specified burn times don’t appear dramatically different. For example, the 2-hour minimum battery life listed for the highest setting on the Swift has the highest burn setting that is 2-3x brighter than the highest setting on the REACTIK+, which has the same 2-hour battery life on high. In practical terms, the Swift will always either be brighter for the same burn time or maintain a similar brightness level for longer than the Reactik.

The reactive lighting technology itself has received some updates since its debut, making it adapt more quickly and accurately. Originally, in the “What’s that noise?” scenario described above, it would sometimes take a half second or so for the beam to adjust when you looked upward, but that reaction time is noticeably quicker with the Swift RL. Another feature Petzl tinkered with is the user control, as the biggest complaint about the Reactik line was that the controls could be a little bit confusing – most commonly, the dual-button system of switching between lighting modes or using the lock/unlock feature. The Swift uses a single button to access the two lighting modes; press and hold toggles between lighting modes and repeated pressing scrolls through brightness levels. Locking and unlocking is an intuitive function by sliding the button toward or away from the little padlock icon.

Thankfully, upgrades to the lighting performance don’t result in a bigger unit or less comfortable ride. A primary concern about high-brightness bulbs is their tendency to get warm, but this was remedied in two ways. One is that Petzl’s R&D folks developed an advanced LED technology that produces less heat than bulbs with similar performance. The other is having a physical gap between the battery casing and the strap; looking from above, you’ll see a full air channel that provides ventilation and natural cooling. The lamp casing is attached to the strap with a central hinge like the one used on Petzel’s Bindi models; in addition to allowing capacity for directing the light upward (should you ever want to), this design avoids the top heavy lever motion that sometimes pivots too far downward with the bottom hinge. The strap on the Swift RL uses the same split-back design seen on the Reactik, but with a small amount of padding on the front half to improve comfort on your forehead. Weight of the Swift RL is 100g, which is about 10g lighter than the Reactik models, without an increase in the overall dimensions. 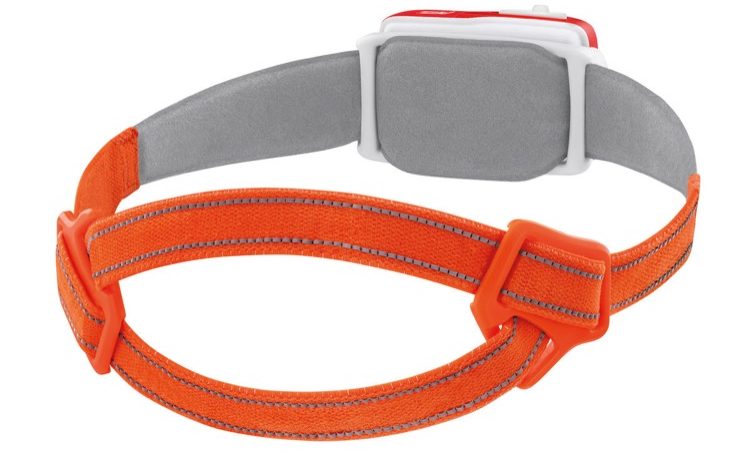 Padded headband in front, split elastic in back.

Our primary test lab for the Swift RL was this year’s Rio Del Lago 100, an event held in November when nighttime darkness lasts for 12 hours or more. We used the medium (300 lumens) reactive light setting for the entire time and got the “low battery” flickering signal after about 8.5 hours. After another 45 minutes to an hour, we were all out of juice – a total burn life of about 9.5 hours. This is fine if you’re running Western States with barely 8 hours of darkness, but you definitely need a backup lamp for longer dark stretches (don’t worry – we had one). Of course, there’s a lot of variability in different circumstances. In our case, much of the evening was spent in relative isolation, so we didn’t have the benefit of other headlamps to share the burn load which might have helped extend the burn time – but there’s no way we were going to approach the high end, 40-hour spec listed by Petzl for the setting we were using. 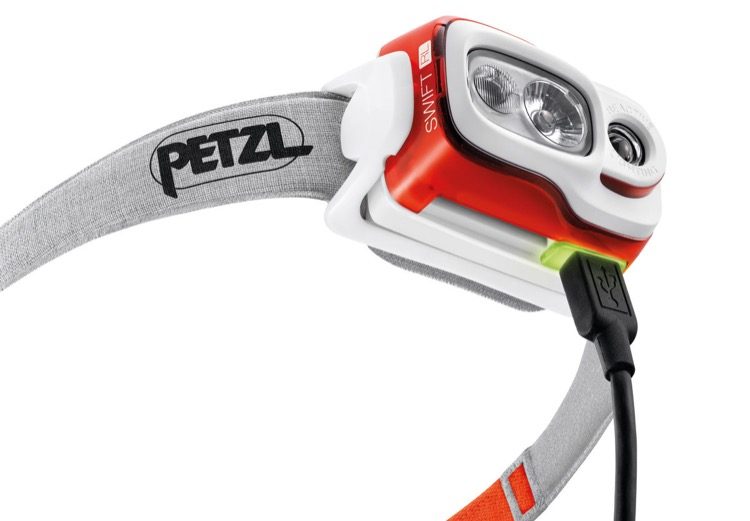 USB recharge in about 6 hours

The Petzl Swift RL headlamp is now available at www.petzl.com.