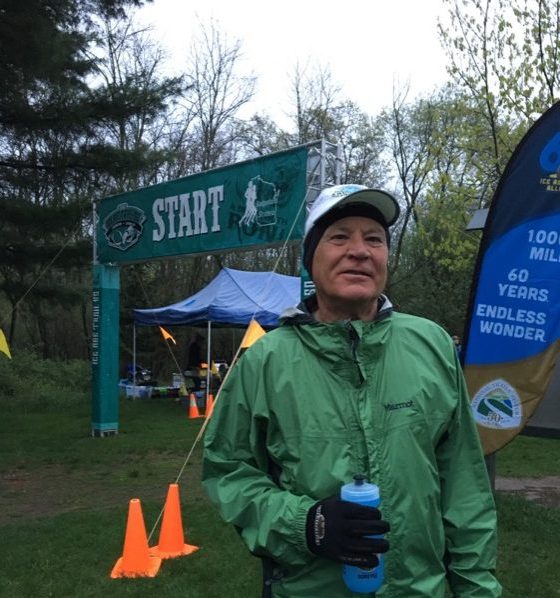 Wisconsin is more than the nation’s cheese factory. It’s also a great place to study the effects of the last ice age on the region’s topography. Before it retreated some 10,000 years ago, a massive ice sheet, as much as two miles thick, covered much of Wisconsin and extended as far south as St. Louis. As the ice receded, it left behind scoured valleys, rolling hills that rise to as much as 300 feet, and lots of kettles (water-filled depressions) dotting the landscape.

That geologic history is center stage at one of the country’s oldest ultras: the Ice Age Trail 50, held annually since 1982 at Kettle Moraine State Forest in southeastern Wisconsin. The race includes 50-mile, 50k and half-marathon distances and usually sells out within hours of registration opening in December. Sponsored by the Badgerland Striders, a local nonprofit running club, and directed by Jeff Mallach, the 2018 edition, which also served as the RRCA Central Region 50 Mile Championship, registered a record 734 runners in the 50 mile and 50k. The Striders donate a portion of the race proceeds to the Ice Age Trail Alliance.

Kettle Moraine State Forest boasts over 160 miles of trails, including 30 miles of the Ice Age National Scenic Trail that crisscrosses the state of Wisconsin for 1,000 miles. Runners follow the Ice Age Trail for much of the race. The trails pass through a kaleidoscope of terrain: lots of rolling hills (described as “relentlessly hilly,” the 50-mile course has an astonishing 7,500 feet of elevation gain), deciduous forests, kettles, and open prairie. It’s a lesson in geology, and for anyone expecting the Midwest to be flat – humility. Add in the elevation gain, a fair amount of technical single track and the hard 12-hour cutoff for the 50-mile, and it becomes a challenge for back-of-the-packers like me. (There is a generous 9-hour cutoff for the 50k.)

I wanted an Ice Age belt buckle. At 72-years-young, now wouldn’t be too soon. My problem with the Ice Age Trail 50 was that hard 12-hour cutoff. The cutoff in my two previous 50-mile races had been 13 hours, and while I had come within spitting distance of 12 hours, I hadn’t cracked it. So I expected to be on the edge, chasing the cutoff most of the day… if most things went right. 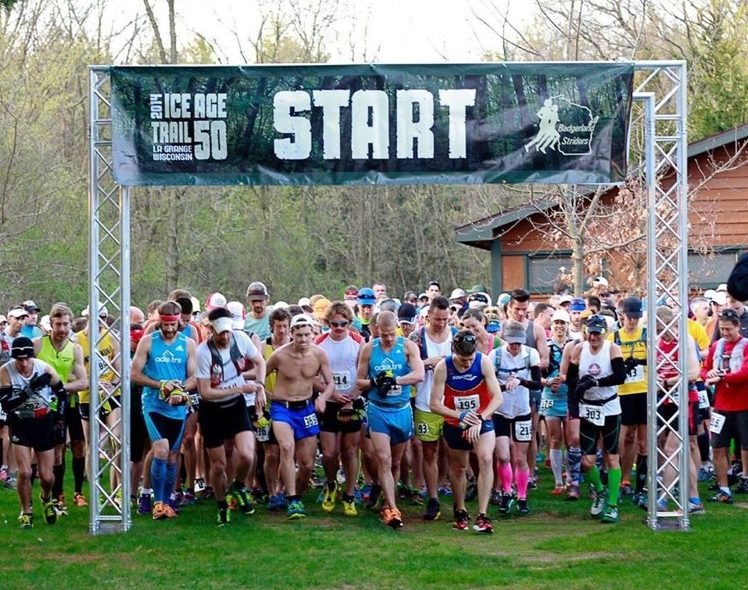 One thing went right from the start. The inclement weather predicted for race day failed to materialize. The day was overcast and cool – ideal conditions for running. The course was well marked, the aid stations well supplied, and the volunteers enthusiastic and supportive. But it had rained on race evening and the trail was intermittently sloppy. The steep hills along the rocky, narrow stretch between miles 17 and 26 were particularly gnarly for those of us in the back half of the queue. I saw lots of muddy ankles and knees including mine.

But that’s no excuse. My race went south almost from the start. The race begins and ends at the Nordic Trailhead just north of the town of La Grange and follows the Nordic Trail, a very runnable loop, for the first nine miles. If you’re struggling on the Nordic loop – and I was – your race is likely over already. I soldiered on through the very technical and hilly stretch from the Highway 12 aid station to Rice Lake and back, but I couldn’t keep anything down, fell behind the cutoff pace, and eventually, like the iconic ultra runner Forrest Gump, stopped. And, still channeling Forrest, told my wife who was crewing me, “I think I’ll go home now.”

Forrest’s ultra was a different kind of run. An existential one, the only finish line in his head. My race had a predetermined physical location with a set of GPS coordinates, and I Did Not Finish. The dreaded DNF: every ultrarunner’s scarlet letters. I guess I should feel worse than I do about that. (I don’t know if I could have felt much worse physically. I once was hospitalized with rhabdomyolysis following a marathon and don’t recall feeling as bad.) Anyway, I believe that I did my best on this particular day, and there’s no shame in that. Nor does it change the fact that the Ice Age Trail 50 is a great race on a scenic and challenging course. Or that I will do better on another day.

There’s a catered barbeque lunch with craft beer waiting for runners at the finish. I was lucky to get down a pint of chocolate milk, the first step toward recovery, and in a few months, redemption.

Great effort. You did your best and that’s all that counts. Age definitely becomes an issue as even when you train your butt off you can’t do anything about the gradual decline in muscle strength and resultant slow-down. I know….been there! At age 73 (74 in July) I hate those hard cut-offs. Just a personal thing though, I respect the race’s rules and the reasons for those time limits. I too hope to keep running into the 80’s and beyond. Maybe our paths will cross someday and we can share some miles.

impressive to toe the line to start! it was my first 50 miler and they are no joke!! congrats to you for starting!!