Dan and Kathy Harshburger at the Mule Run 50K in the early ’90s.Photo Dan Harshburger

Some people can run ultramarathons for years, even decades, and never get a serious injury. Others are very injury-prone, forced into taking extended breaks often. Surely, some runner’s bodies are better suited to the demands of running far than others, but there’s got to be more to it.

About a decade ago, a friend of mine, Tony Covarrubias, noted that I fall into the category of someone who runs and races a lot, yet, I rarely get injured, and never a serious injury. As of the end of 2017, I’ve been running ultramarathons for 16.5 years and have a total of 172 finishes (plus 81 marathon finishes). The longest I’ve taken off for injury was in the summer of 2006, after an ill-advised three straight weekends of ultramarathon racing. After the third, I had definitely pulled a muscle in my calf; I took two weeks completely off from running and recovered nicely to run a 100K one week later. 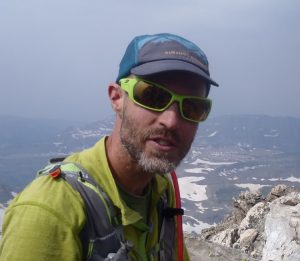 Thinking back to those three weekends, that injury, Tony’s question, and why I don’t suffer from serious running injuries, I believe that a lot of my running health has to do with two main things: taking regular running breaks and varying my running.

As a coach, I strongly encourage my clients to do the same. After every goal race, I have them take off an unspecified amount of time from running. Rather than subscribing to some pre-determined, one-size-doesn’t-fit-all amount of time to take off, I let their bodies decide how much time it needs. It’s always at least one week of no running, usually two, sometimes a month. When they do start up again, I’ll let their body slowly ease back into the grind of daily training. This is a point where it’s very important to have good communication between a coach and runner, so as not to do too much, too soon.

In addition to time off after a goal race, it’s also important to take time off when your body tells you it needs to. If you’re feeling unusually tired, you often have an elevated resting or exercising heart rate, and/or the thought of running sounds more like a chore than a fun activity, it’s a good idea to stop running for a while. This can come during times of peak training for goal races, so it is not ideal, but important to listen and do what your body asks. Doing so not only can help keep your body from developing potential over-use injuries, but also from burnout and fatigue. In these situations, I often have clients take extended breaks from running, as well as from coaching so they don’t feel like Coach is “watching them.”

The other big thing I incorporate into my clients’ schedules is to vary their running. Regardless of what you are training for, I’m a firm believer that this can help keep you running longer with a lower chance of overuse injuries. Varying your running has many different meanings: short, long, slow, fast, easy, moderate, hard, up, down, flat, rolling, hilly, smooth, technical, trail, road, track, grass, etc. It also includes rotating shoes on a regular basis (stability level, flexibility, stack height, brand, etc.). Each shoe is going to hold your foot a bit different, forcing all of the muscles in your feet and lower legs to work a little differently, thus, strengthening them in different ways based on the shoe.

While listening to your body, taking advice from your coach and switching up your shoes can help reduce the likelihood of injury and increase longevity, there are also runners who will tell you that a strong support system keeps them going strong. Dan Harshburger has been running ultramarathons since 1984 and has 199 finishes to his credit. When asked what has kept him on the trails mile after mile, he didn’t reveal a secret diet or strength training program, but answered that it was his wife and running partner, Kathy. Finding a life partner to run with can be incredibly motivating and help keep you emotionally healthy and happy. Dan reflected on how his wife has been pushing him out the door and down the trail for decades sharing many great nights together traversing rocky trails to the next 100-mile finish. In Dan’s words, “My greatest accomplishment in running was picking the right partner in life.”

Ultimately, ultrarunning longevity comes from finding out what works best for you to be motivated to enjoy it for the long haul. Ask others for advice, but try things out for yourself, as we are all each an experiment of one.

Sean Meissner has been coaching runners since 2002, starting as a volunteer assistant high school cross country coach, and slowly transitioned into coaching runners of all ages, abilities, distances and terrain. He is the founder and race director for the Peterson Ridge Rumble trail race, has over 250 marathon and ultra finishes, and has run for Montrail since 2003. Sean currently coaches through Sharman Ultra, and works and plays, mostly with his dogs, in the mountains surrounding Durango, CO.

Good posture is also a major component to longevity. If you run with poor spinal position the inefficiencies travel straight to the weight bearing part of the body (the legs). Great article.

I think efficient posture is more significant than “good” posture. I have terrible posture, this has been pointed out for years. Now, perhaps I’ve not been running long enough to find out, but have never had a running injury. I do feel I am very efficient and that (in my case) has nothing to do with posture.

I could be wrong, but here’s my opinion on two more things:

2. Drop the intensity a bit in races. I was over-eager when I first started, and would really RACE. Now I race, and race hard, but always keep it dialed back about 5% from my ultimate max. I’ve found that not only does this decrease mental burnout after races, the races are sooooo much more fun. People talk about how every 100 miler has very dark times. Not true! Not true! You can truly keep a smile on your face for every minute of a 50 miler, and be generally positive and happy for 24+ hours in 100+ milers. But you have to learn how to pace better. Much better. That doesn’t mean not taking races seriously, it means taking them so seriously that you optimize the fun and finish pretty darn well for your training every time.

Who knows, maybe I’m wrong, but I’m looking forward to the next 10 years.

I would also add cross training. Yoga, strength training and doing some other type of cardio such as biking, swimming or hiking uses different muscles in different ways; thereby keeping the body strong and resilient. It is also beneficial mentally to switch things up regularly.
I have been running trails and ultra races for 18 years now. I have competed on over 200 races from trail to road to triathlon to adventure races; 80 plus of those ultra-distance. After all these years I still have a thirst for competition and end up signing up for usually around 30 races a year of all types (mostly trail) and all distances; with an average of 6 ultras per year.
As you pointed out, it definitely does help that I have a very supportive husband that enjoys racing (mostly bike) just as much as I do.

In a word: Inspiring! Great content, as a relatively young runner (31) I Love to see these stories and examples of longevity, in body and mind!