At last, I found a race held in the shadow of the COVID-19 lockdown, and there was no series of ominous email warnings followed by a reluctant cancellation notice. The Loco Challenge race series held in parts of the Lassen National Forest on June 6 in north central California introduced a regimen of social distancing precautions, but managed to put a string of very happy runners out on the trail at several distances including a 5k, 10k, half marathon, 50k, 100k and 100 miles.  Kudos go to race director Karey Cooper and all her volunteers for pulling it off with style and panache.

The little town of Butte Meadows, with a year-round population of about 40 souls, screams wilderness adventure with its scattering of cabins and mountain homes, and two ramshackle restaurant/bars, the Bambi Inn and the Outpost. An American flag attached to the trees towering over the Bambi Inn is roughly the size of the whole town.  Leave town in any direction and you’re in a beautiful, mixed conifer forest.

Much of the trail at Loco is jeep road with good to great footing, although scattered rocks do intrude on your carefree running in some spots. Streams and rivers cut through the forest, but everything could be crossed without getting wet. Elevation change is not a big factor either, and the weather this year was very benign, so the biggest challenge was just the sheer distance. 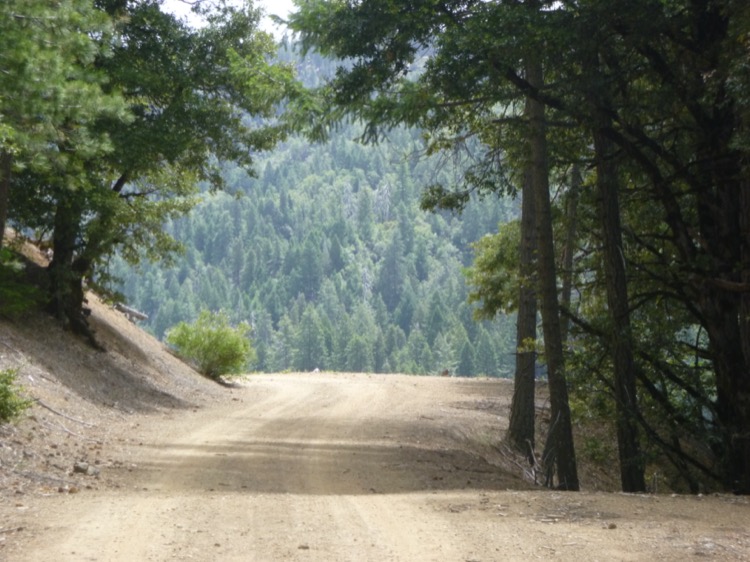 With the nine-mile stretches of unbroken jeep road to cover, any landmark became an event. The turnaround at yellow gate was a welcome sight. Pushing through the brush of 2.8-mile lollipop loop was diverting. There were little rock cairns used to mark the trail out to the end of Elephant Head where flags were not allowed.

The aid stations, with their unlikely complement of green alien figures, were the big draw. Especially in the dead of night.  This was when runners were reminded of the fact they were racing in the time of the coronavirus. Volunteers and runners alike had to pull up their buffs, and runners could not approach the food or water tables but had to stay behind lines in lanes marked on the ground. Volunteers had to help with water and whatever a runner wanted to eat, which kept them very busy as runners couldn’t do anything for themselves, leading to some added wait time.

Race check-in had been full of virus-related precautions. There was an initial temperature check and waivers were signed by pulling a pen out of a “clean” bin and dumping it in a “dirty” bin. The swag bag had a mandatory buff, a little pouch for food, hand sanitizer and a bag with toilet paper. Of course, everyone was supposed to keep their social distance and only go without the buff when alone on the trail. All in all, though, the chance to run in a race far outweighed the minor annoyances of the virus routine.

Any report on the 100-mile distance at Loco would be remiss without covering the final, four-mile trail circuit that guaranteed you were running well past 100 miles. A cool map given to each runner showed that the final route is part of a system of three trails which happen to form the head and butt of a coyote, and amazingly enough, a fart issuing from the butt end. Signage along the trail reads, for example, “This way to Coyote Fart.” It is a hilarious way to put in the final miles of this race and in an odd way, it took the sting out of what is usually a last desperate trudge to the finish. 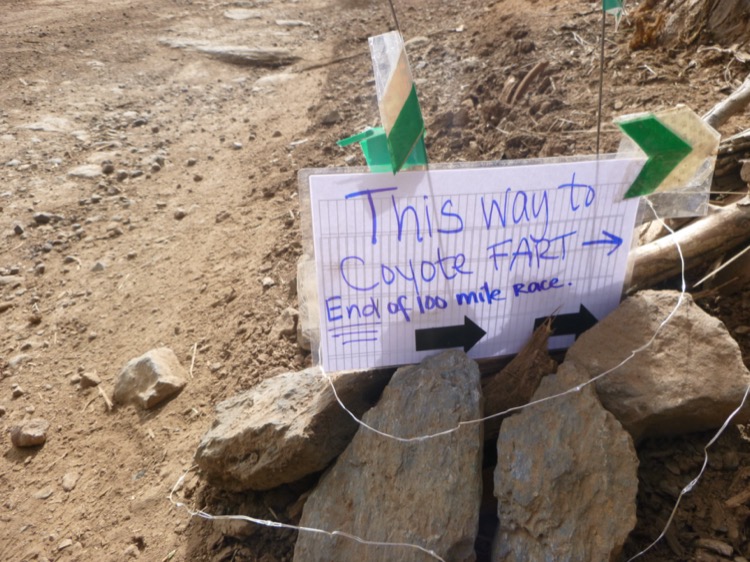 Thanks for the great write up. It was wonderful to have you at the race. So glad you appreciated a little race humor tour there on the trail. The Loco Crew finds it helps up keep our own sanity in the craziness that is race week!

Take care and hope to see you at another race soon.