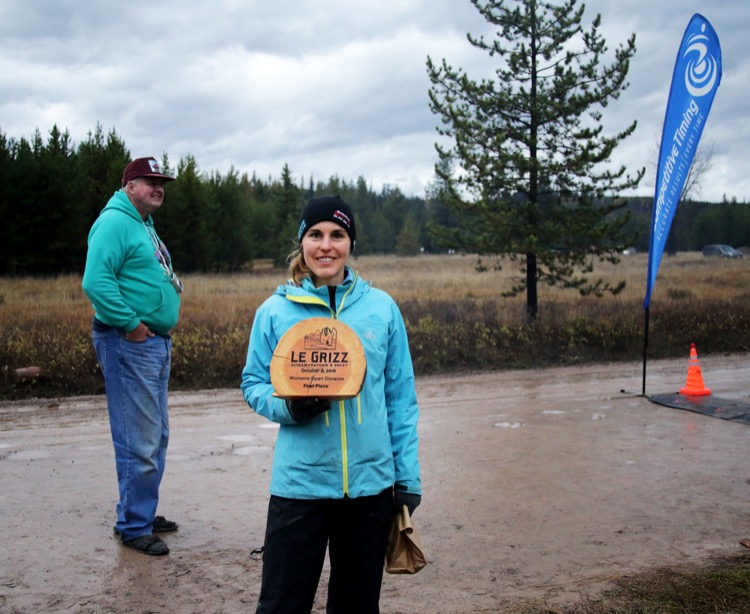 Montana in the fall normally brings to mind elk herds moving across the flats, Tamarack slowly turning gold amongst the evergreens and new snowfall in the peaks of the Continental Divide. This October, this area of Montana broke most known records for monthly precipitation. For the runners of this year’s Le Grizz 50 Mile Ultramarathon, it felt like a good majority of that water fell on race day.

This is a race steeped in local culture and tradition. For 33 years, the race was held near the Spotted Bear Ranger Station on the South Fork of the Flathead River. Up to 100 runners participated each year. In 2014, the race moved to nearby Polebridge, MT, along the North Fork of the Flathead River. As the race webpage states, “Different fork in the river, same crazy tradition.”

The small town of Polebridge is unique in that there is no electrical grid and no cell phone coverage. While it’s filled with tourists in the summer months, during winter you still can see locals recreating in the surrounding wilderness. It’s known for a wild local saloon, a mercantile with an epic bakery, world class fly fishing and as a gateway into the North Fork District of Glacier National Park.

In the early morning of October 8th, fog hung in the air, hiding the epic views of the mountains of Glacier National Park. The chance of rain was forecasted as 90%, and temperatures were going to hover between 34-40 degrees all day – a recipe for hypothermia if there ever was one. Runners shivered at the start line, herded like skittish sheep by a stone-faced man. The huge man stands well over 6 feet and wears Teva sandals with socks. A shotgun is slung over his shoulder.

Don’t worry, it’s Montana… we all have guns.

This is Pat Caffrey, the Race Director from 1982-2014. He’s still helping out in the transition from the South Fork to the North Fork. Caffrey gives a brief bear safety briefing (“Don’t bother the wildlife”), some ground rules (“Go run a bunch and don’t get hurt”) and reminds the slower runners that whoever finishes last needs to bring the lantern at the last turnoff (“It’s the heaviest one we could find”).

After the boom of a single-barrel shotgun, the runners begin a long journey in one of the most remote towns adjacent to Glacier National Park. This is a race that, while technically on a road for all of its 50 miles, feels like a trail race due to the varying terrain, elevation changes and epic mountain views. Runners included both locals and visitors. The North Fork Road is notorious for creating lots of business for AAA and local tire shops.

Despite torrential rain throughout the day, volunteer aid stations kept campfires burning, soup hot and a wide variety of snacks ready. Many runners stayed in the game with the help of support crews who could access them at any time. Support crews not only provided hot beverages, cookies and other treats (perhaps fine distilled spirits) to their own runners in between aid stations, but to those without crews. The camaraderie formed amongst complete strangers during times of adversary never ceases to amaze.

A new chapter was added to the Le Grizz history book, as for the first time, the race was won by a woman. Christi Richards (Missoula, MT) finished in 6:56, maintaining an average pace of 8:20. Right behind her, with a finish time of 7:14 minutes, was Gwendal Le Tutour (Sandpoint, ID).

Runners of this year’s Le Grizz 50 Miler and Relay held to the tradition of “Montana Tough,” with 44 runners making it to the finish line party in less-than-ideal weather conditions. Finishers received a gorgeous mug made by local Whitefish Pottery, a dinner of fried chicken and JoJo’s, local Montanan beer and, of course, one of the Polebridge Mercantile’s most coveted items… a huckleberry bear claw.