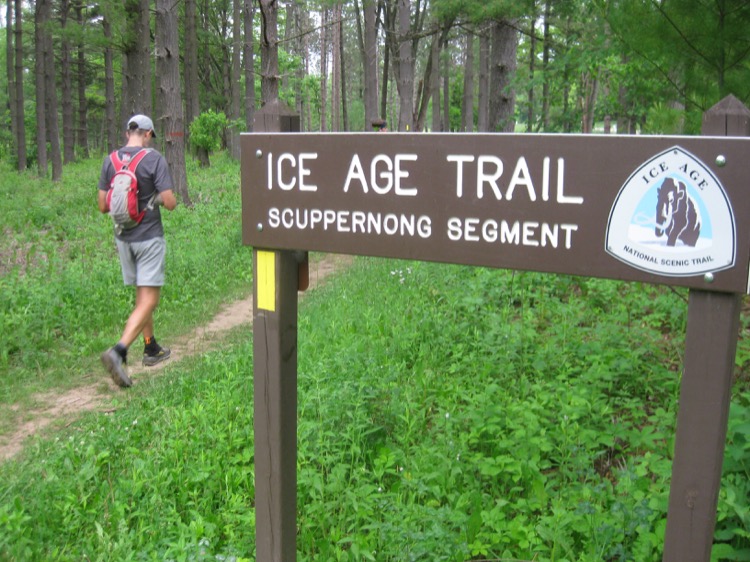 “Kettle Moraine.” The name is striking, weird, mysterious. But it turns out understanding the name helps you appreciate the awesome beauty and the mighty geology behind this classic Wisconsin 100 mile endurance run.

First, a moraine is an accumulation of debris left behind by glacial activity or the debris piling up on the sides or at the edge of an active glacier. On a massive scale when two ice sheets collide edge to edge an interlobate moraine forms where large amounts of debris are transformed into entire landscapes of hills and ridges. A large chunk of southeastern Wisconsin is one such interlobate moraine formed by the Saginaw and Huron ice lobes that receded about 10,000 years ago as part of the Wisconsin Glaciation.

Scattered all over this area are places where large blocks of ice once buried in the debris have melted, creating small and large depressions called kettles. Kettles are so common in this area the whole moraine has been given a specific name, the Kettle Moraine. Ah-ha! Studies that began here in the 1870s led to key discoveries and the first maps that defined North American glaciation.

Thus as runners follow long sections of the Ice Age Trail, which was laid out to highlight the natural features of the area, they encounter the moraine ridges, the kettle depressions, gorgeous swaths of open prairie, tall mature forests, numerous ponds, streams, lakes and rivers. There are wildflowers abundant everywhere, frogs making some unearthly noises in the evening, birds and deer.

The transitions from tall coniferous forests with thick underbrush, where you dive down into deep depressions and then pop immediately back up, to wide open grassy prairie areas and huge expansive skies are stunning. The trail narrows into a technical single track at the Rice Lake end of the course in contrast to the miles of wide smooth trail that characterizes most of the rest of the course. Cunningly wrought plank walkways and wooden bridges keep you out of marshy areas.

In fact, Kettle Moraine sets up as a great race for someone attempting 100 miles for the first time. Footing is good throughout and elevation change is not a significant factor, but the course is varied and difficult enough to challenge a first timer without being too discouraging. This year was also blessed with perfect weather, overcast skies, just a smattering of rain, no brutal sun in the open sections, and manageable temperatures. You need your mental game and your eating and drinking game to be up to snuff as with any 100 miler, but this race is going to be on your side with its vast beauty and excellent support organization.

Speaking of which, the aid stations at Kettle Moraine are amazing and obviously the product of much extremely hard work. It was striking that there never seemed to be anything in short supply. There were always fresh sandwiches, fresh fruit, hot soup ready to go, the whole range of sodas, plenty of ice and tons of extras. “Unmanned” aid stations were manned and had plenty of things to offer beyond the standard water and sports drink. If your planning fell short and you didn’t have exactly what you needed in your drop bags, the aid stations had energy gels, electrolyte tabs, bug spray and sunscreen. You could practically show up with just a water bottle and a story about your luggage getting lost and still have what you needed to finish the race. One aid station even featured a box of fresh batteries ready for the taking, truly out of the ordinary and truly awesome!

Two of us pulled into one aid station, Tamarack, late at night at about 68 miles. It was not really a major aid station, sitting as it did between the start/finish and a busier aid station, Bluff, where there were crews and drop bags. Yet there were about five volunteers eager to help us, the soup was steaming, the coffee was brewed, everything was fresh and ready to go. One volunteer had just made up a bed complete with blanket and pillow next to the trail for a runner that was flagging.

My running buddy and I asked to have someone time a ten minute nap for us and three or four volunteers got involved. When we both popped up and started preparing to leave after nine minutes, we had the whole aid station commenting on our decision to cut our rest short by a minute. That kind of concern and support is invaluable for runners trying to make it through the dark hours of the night.

The Kettle Moraine 50 and 100 is definitely worth the trip to this rural area of Wisconsin. Driving out to Whitewater, home of the University of Wisconsin at Whitewater, and La Grange, the nearest town to the Nordic Start/Finish trailhead, you pass through farmlands and stands of trees. It’s hard to imagine the dramatic areas you’re about to encounter in the Kettle Moraine State Forest and along the Ice Age Trail just beyond those fields and trees next to the highway. Plus do you really want to miss out on a race that has an aid station named Scuppernong?