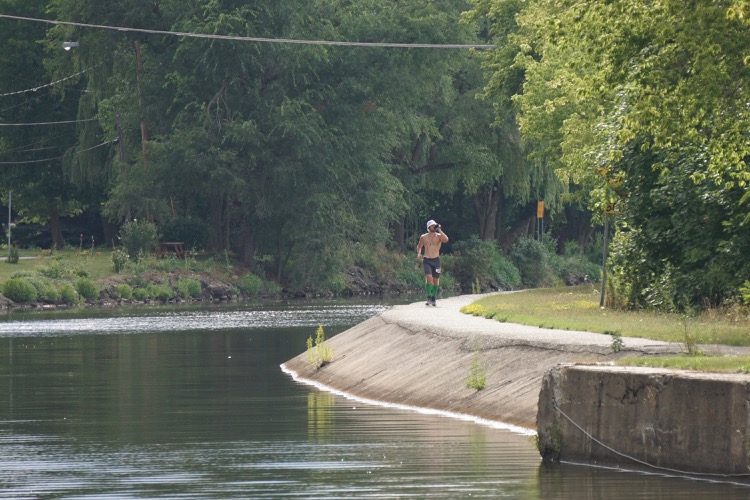 Keeping It Moving at Beast of Burden

Morning of the Race
It took over 24 hours of running and a bag of corn starch to understand why they refer to this ultra marathon as “The Beast of Burden.” Let me explain. First, the race starts at 10:00 a.m. Since I’m an early riser, I knew my internal race clock would be completely off. This was very much out of the norm for me. For instance, it’s not unusual for me to wake up for my long runs at 3:00 a.m. Something about running 20 miles in time to catch the morning sunrise is both motivational and inspirational.

As you can imagine, starting a 100 mile race at 10:00 a.m took me out of my element. But in the ultra marathon realm you need to recognize excuses and leverage them into advantages. With this in mind, I figured I’d get to sleep in a few extra hours. This would be advantageous since my second baby boy was just born and if you have children you know what it’s like to have an infant at home – more than four hours of sleep straight does not exist. Anyway, the alarm clock went off, I woke up, got dressed, and toed the starting line. I prefer to start on an empty stomach so I did not eat any pre-race meals. This strategy has helped my fat metabolism become more efficient and has also helped with stomach issues later in the race. We listened to the pre-race announcements and took off running.

Course Description
Here is the official course description: “The ultra marathon course starts out on the towpath in front of Wide Water’s Marina located on the south side of the canal. The course is a 25-mile “out and back” loop. 100-mile racers must complete four loops and the 50-mile participants must complete two loops. All three aid stations will be stocked with a wide variety of food and cold beverages. We truly offer a feast at The Beast! The race will start at the beginning of the towpath as shown on the map below. The first mile of the race is on a paved trail. After you cross the bridge on the North side of the canal you will be on a very racer friendly crushed cinder surface. While trail shoes aren’t necessary, some find the use of gaiters helpful.”

First Lap – 25 Miles
We began running the first lap of 25 miles. The race was 100 miles in length, made up of four laps. Actually, the laps were out and backs–you run 12.5 miles straight, turn around, and then run 12.5 miles back to the start. The best way I can explain the first lap was HOT. They said the heat index reached a race record high of 110 degrees. Also, you will not find any shade on this course. Within the first 30 minutes of the race it began to rain. The rain felt good; however, there was one problem–the rain washed away all my sunblock and vaseline and I still had 90-something miles left to go. I could reapply after the first 25 mile loop but, as you can imagine, damage became inevitable –  especially since I run without a shirt.

The course was flat and smooth, right along the Erie Canal. Its trail is a wide track of dirt with a few loose rocks, the type of course built for a PR if it wasn’t for the August sunshine. There were three aid stations total: one at the start, one at the turn around, and one in between. This was very convenient for planning and logistics purposes. Drop bags are prohibited at the middle aid station. I skipped the aid stations on the first loop but had my handheld filled with coconut water to get me back to the start. When you’re completing each loop you actually pass the starting line from the other side of the canal. Then you run another mile into town, over a bridge, and back to the start. At this point, if you’re quiet enough, you can hear the beast laughing at you!

Second Lap – 50 Miles
After the first lap of 25 miles I was overheated, depleted, and feeling unmotivated. I looked over to my crew and said “After this one I retire!” knowing in the back of my head I’d be looking for the next race upon completion. My family makes all my races and I am extremely grateful for everything they do. In the ultra running world CREW also stands for “Cranky Runner, Endless Waiting.” I am always extremely grateful to have my family support me on race day.

Back at the start I stuck my head in a bucket of ice, put down some coconut water, and took off for my second lap. I decided to wear a white golf bucket hat and a t-shirt. At this point it was critical to protect myself from the sun and try to keep my body cool. During the second lap I worked on getting my head straight. I put on my brand new playlist of country music and sang some of my favorite songs while pacing down the trail. The heat was getting to most of the runners. I remember sticking my head in the canal next to the trail to try and cool down. Unfortunately, the water felt like warm bath water. I heard more than 60% of the runners dropped out that day compared to the average of 20%.

When I reached the turnaround of the second lap I went into the aid station. This aid station was indoors and naturally hot and muggy. Much appreciation for the volunteers that day supporting us at the aid stations – they were absolutely incredible! Still stuck in a mental rut, I did what I do best and kept my feet moving forward. When running ultras I find it best to keep your mind in the present and to continue moving your feet forward no matter what. To me, ultra running is not a race to complete, but a journey to travel. Things always get better and things always get worse. Ultras are full of peaks and valleys both literally and metaphorically.

I filled my bottle up with coconut water, filled a ziploc bag full of figs, and took off. On the way back to completing my second lap, it began to storm. It was absolutely, positively refreshing to feel the rain. It was strange; my body, for the first time, reached a point where I could not cool down, no matter how much ice I put on my neck or cold water I drank. My increased body temperature was preventing me from picking up my pace. This is coming from a guy who loves running in the summer and frequently lifts weights in the sauna at the gym. Either way, the storm lifted my spirits and I began to feel great at the end of my second lap. 50 miles down, 50 miles to go.

Third Lap – 75 Miles
Before starting my third lap I changed clothes, reapplied vaseline, filled up my handheld, grabbed a charged iPod, and went back out. I didn’t change socks or shoes because I wear compression socks when running. I highly recommend compression socks when trail running because it helps prevents blistering on your feet. At this point I heard the dropout rate was increasing and some people were missing – not the best news to receive when trying to stay motivated with 50 miles to go.

A few miles down the trail I saw a set of glowing eyes in the bushes. The last time I saw a set of glowing eyes during an ultra I was face to face with a mountain lion! This time, as I got closer, the dark object jumped out! It was a cat again, but this time it was not a mountain cat…it was a kitty cat! This made me laugh as I cruised down the trail.

My endless forward motion continued as I kept cranking out the miles. As it got later in the night I began getting very tired. For me, one of the hardest parts of an ultra marathon is keeping your eyes open and not passing out during the night. One step, two steps…this looks like a good place to lay down…three steps, four steps…what if I rest my eyes for just a few minutes? Fighting the irresistible urge of surrendering to my internal clock for endless hours into the night was an accomplishment in itself during the Beast of Burden. When I reached the end of the third lap I had some chicken broth, a cup of coffee, some almond butter, and took off for the fourth and final lap.

Fourth Lap – 100 Miles
The last lap was the toughest. Not because of the lack of sleep, not because of the nausea I was dealing with, and not even because of the fatigue I was facing. The day of running in the sun and rain came back to haunt me. It was toughest lap because of the intense chafing I was experiencing. The chafing got so bad that it felt like razor blades were rubbing against me with each step. The pain was unbearable. When I reached the aid station at the turn around it was time to get creative and resourceful.

I grabbed two shirts, a roll of duct tape, a bottle of vaseline, and a bag of corn starch. I duct taped one shirt under my shorts and poured down half the bag of corn starch. This was actually an incredible alternative to baby powder. I put on the other shirt, lifting the front behind my head so it propped my arms up preventing them from rubbing against my underarms. Here I applied some vaseline and corn starch. This jiffy lube of ultra running, plus the Sunday morning sunrise gave me some life back as I pushed myself across the finish line. I crossed the finish line, celebrated with my family, took some pictures with the finisher buckle, and nearly ate an entire watermelon.

Final Thoughts
All together it was a very tough day. It was the third 100 mile race of my ultra career and my 61st ultra distance (between races and training runs). I went into the race with a PR mentality but reached the point that finishing was the objective. Crossing the finish line brought many mixed emotions. They say a marathon is how you perform when everything goes right and an ultra marathon is how you perform when everything goes wrong. Well, during a race when everything went wrong, crossing that finish line never felt so good, especially since this was my first race after recovering from pneumonia in the spring.

So why do I run ultra marathons? At first it was for something more, the feeling of achieving the impossible. But now I race for my two baby boys. Because one day when I tell them they can be or do anything in this life I will truly mean it. Thank you for taking the time to read my race report. I hope you find something within this post that helps you in your future races, whether it’s a new technique, learning from one of my mistakes, or maybe some inspiration to get that fire burning within yourself. Thank you and Keep It Moving!