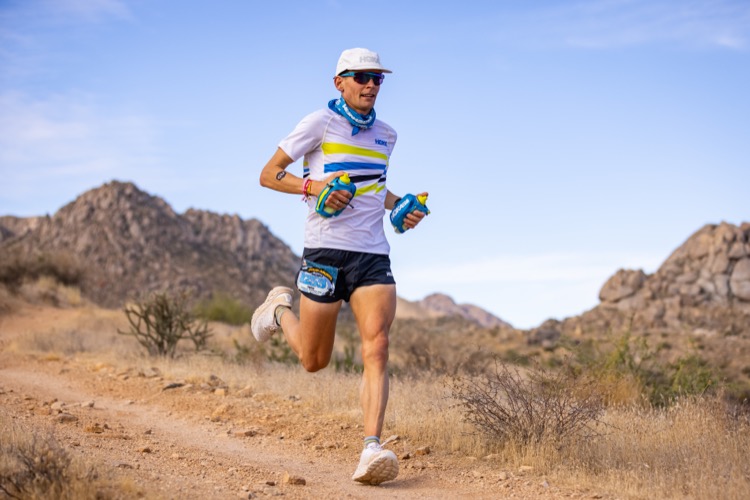 Racing in 2020? From the raging pandemic and continued nationwide social unrest, to an unprecedented general election and race calendars that could have been crafted by the magic talents of Penn and Teller, I had all but given up hope of racing again before the end of the year. It had been nearly eight months since the last time I donned a bib at the USATF 50 Mile Trail Championships in Auburn, CA, and like many reading this, the subsequent months of fear, heartbreak, uncertainty and self-reflection had transposed my focus from athletics towards what could be done to save lives and advance our country into safely reopening.

During the early weeks of the shutdown, my own selfish athletic pursuits had faded and concern for the safety of my patients and community-at-large took center stage. As I donned PPE and entered our small rural hospital’s strictly regulated perimeter – with case numbers on the rise and our meager three ventilator capacity maxed out – my dreams of racing Western States and UTMB were replaced with anxiety, wondering if I would ever even compete again if or when I was exposed to the virus.

As we flattened our curve and restrictions across the country were lifted, many more months of uncertainty saw additional canceled races and FKT attempts secondary to California fires. By mid-September, I caught wind that Javelina Jundred might take place. The pancake flat, fully exposed Arizona desert is a far cry from the terrain and climate where you would expect to find this mountain-minded, ultrarunning junkie, but as I lost ground on my own mental illnesses, I needed something to look forward to. Everyone in our community did. Over the next six weeks, I logged more treadmill miles in our slightly smoky and chilly garage than I had in my entire life. As I pounded the belt, sweat dripping from underneath the beanie I hoped would help with heat acclimatization, I visualized the Javelina course and how it would feel to have dirt underneath my feet again.

The Javelina atmosphere, which is typically dialed up with multiple days of music, activities, dance parties and a side of racing, proved to be significantly tapered. Waves of 30-50 runners launched intermittently in groups of 10 from Thursday evening through Saturday morning, and “Jeadquarters” – the start/finish area for all races – had increased physical distancing between campsites, RV docks and crew stations. This created a bit more of a rural feel compared to the standard, sardine-packed mini city that’s typically constructed during normal years. These adaptations, however, did nothing to deter race director Jubilee Paige and her team from weaving threads of the typical race vibes throughout event weekend. Music still blared and costumed runners, volunteers and crews distantly danced each night away. All the while, beautiful suffering under the hot desert sun was on full display. 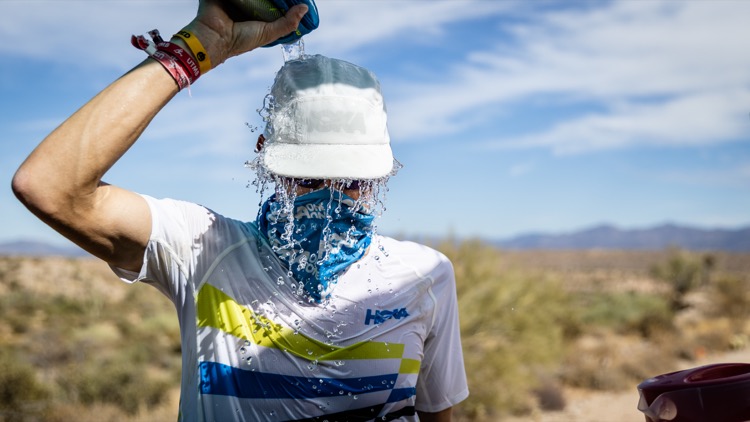 Race check-in was open early and offered runners the ability to safely nab their goods. Race morning – or afternoon (or evening) per each runner’s designated wave start – consisted of temperature checks, spaced corrals and sparse fanfare. My wave launched during the 6 a.m. Saturday morning slot just before sunrise, and roughly 50 other elite runners and I set out for five consecutive loops in the Sonoran Desert. Equipped with a measly emergency headlamp, I cautiously led the lumpy first few miles while being backlit from those behind me with proper torches, trying to not end my race with a fall before it even began. The trail meanders up and around the base of desert foothills, in and out of sandy washes, and through particularly prickly and painfully unpleasant cholla cacti, should you run into one. By 15 miles, I was able to break away from the competition and began racing the ghost of Javelina’s record holder, Patrick Reagan. The “Arizona asphalt,” as I coined the course, was a refreshingly enjoyable throwback to my road running roots, and I gleefully reveled in the fact that unlike every other hundred I’ve attempted, there was no overstuffed backpack to be donned, or power-hiking over alpine cols while white-knuckling trekking poles. Just a dry, oppressive heat that was rapidly evaporating the sweat off my exposed skin. 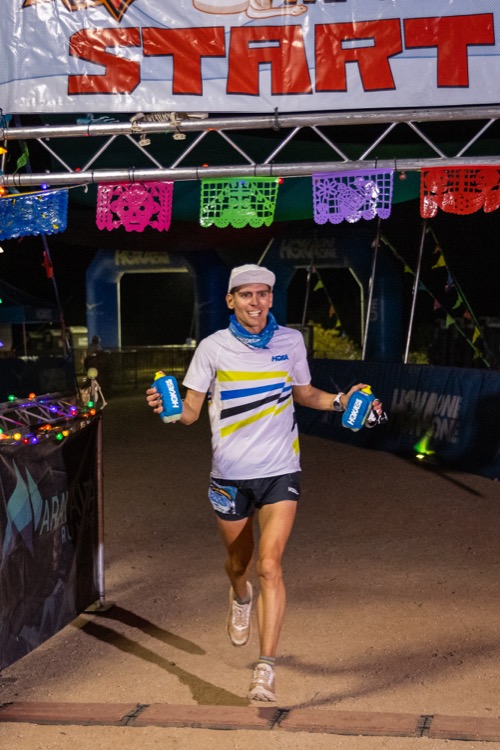 Unfortunately, the blissful excitement brought me through 100k nearly an hour under record pace. Predictably, cramping from the spicy early pace and brutal early afternoon temps gave way to a shortened stride, longer aid station stops, and a course record that faded away like the mirages I started to see in the distance. I looked for slivers of shade beneath the giant saguaro cacti that lined the course, but this effort proved fruitless. Hope would be found in fellow runners who each suffered through their own efforts. The unique nature of a multi-loop, hundred-mile race is the continued encouragement you can both give and receive from runners on course. The joyful smile or quiet and painful whimpers of “Good job,” made the lonesome desert feel much less alone.

The fourth loop was the most difficult. It felt like the third lap of a 1500m race – albeit nearly 3 hours longer – while holding my position, trying not to give into the pain and preparing for a final kick. One only has so many matches to burn in a career, and a decision during the fifth and final loop was made to preserve, rather than push (i.e. kick), as so much had already been won on the day, and a celebratory final lap felt in order. I crossed the line in 13:28:04, good enough for a 6.5-hour 100-mile PR.

With modified travel, and pre- and post-race isolation, my experience was less threatening than a visit to the local grocery store. I walked away with umpteen lessons learned about pacing, cooling and fueling in a hot environment. It was also a reminder that much like navigating our current pandemic, unpredictability is the one constant we can continue to expect in ultrarunning. I hope that as a community, we can embrace the unknown, move forward when advised it’s safe, abandon when best for all, and not lose our virtues in the process.

Compared to mountain 100s, Javelina is flat. However: There’s not enough uphill to rest on, nor enough downhill to recover on. That was the perverse genius of the legendary Geri Kilgariff who invented the race. And one that continues to shank the foolish and unwary who come out every year to “crush and dominate” [in the epic last words of two idiot Cross-Fitters who DNF’d with blisters as big as dollar pancakes at 60miles, maybe about 10 years ago].

Great writing along with great running! Congrats! I really enjoyed your report. Also I’m glad your enthusiasm shined through. Personally speaking, I have felt somewhat guilty about sharing my recent race experiences (Speedgoat and Aravaipa’s Whiksey Basin), in spite of the covid precautions, because many runners I respect understandably frown upon any travel and racing right now. It’s a tough call, but I think you showed how the benefits and precautions outweighed the risk.

Tim – It was an honor and a pleasure to play a small part in your race, and I enjoyed seeing you run from the comfort of the timing tent. You ran a fine race and lived to run again another day! Congratulations on your victory!

Great fun, thank you for sharing. Kudos to you and Nicole B and hats off (pope and top hats alike) to Jubilee! Great fun seeing you run and whooping you on!

It was so fun to watch you run like a Trail Surfer just enjoying the run, sun and trail (even if for quite a few loops)! Keep leading, writing and living from the front……….it helps those at the pack tag along! #trailsurfer

Great article Tim. Really enjoyed watching you tear it up in the desert. Welcome to the Loopy Club.