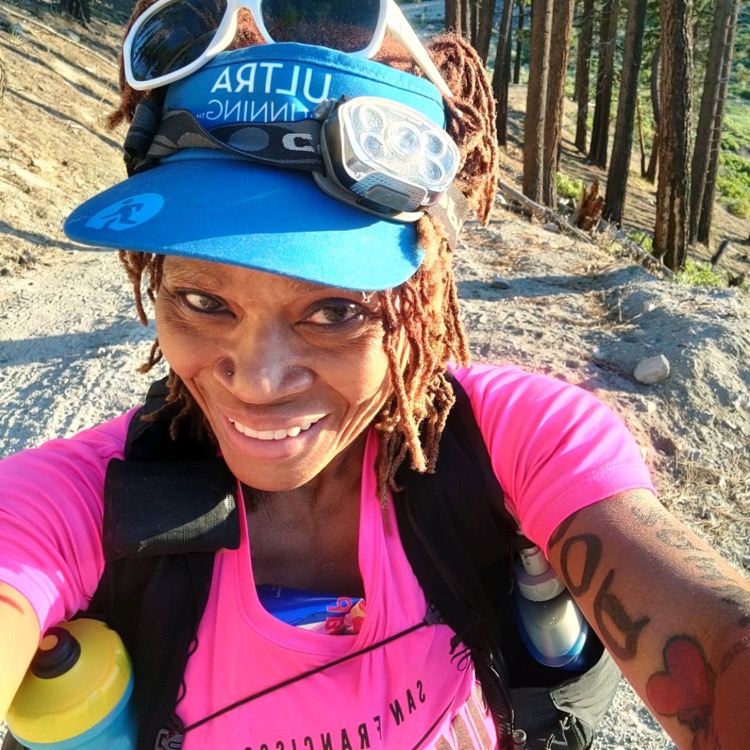 It’s hard to know if Jameelah Abdul-Rahim Mujaahid ever stops. When describing a typical week, the single mother of five from Atlanta sounds like she is constantly on the move.

Her week often starts with making sure she’s back home from a race to get her kids to school Monday morning. After that, she’s off to one of three jobs: a fitness instructor, a job at a fitness-consulting firm and a supervisor for the sunrise shift at UPS. In between, are the duties of shuttling kids and sleeping when she can.

After all of that, she finds time to run ultras—and not just one or two a year. In 2021, she attempted 47 ultras and finished 37. The acheivement earned her a nod from UltraSignup.com for most attempted races.

“People ask me how many races I run,” Mujaahid said. “I honestly have no clue because my only goal is to get home by Monday for work and get the kids to school. I know my final goal is my family and then racing, and that’s why I don’t even think about it as I go.”

Though it doesn’t seem possible, Mujaahid’s life grew more hectic after a fire recently destroyed her home on December 12. Now, living with her cousin, her running schedule has become scarce, if not nonexistent, and that’s okay with her.

Running is something that “fits in where it fits in,” as she puts it. Her family has always been her priority. Ever since leaving an abusive relationship in the 1990s and keeping multiple jobs for the past three decades, she works hard to support her family. The ultrarunning prowess seemed to be a way to further prove to her kids and herself that despite all she does, she can continue to grow as a person.

Where It Comes From
A house fire can take everything. Mujaahid said she is blessed that she and her family were able to get out without injuries along with saving some essentials like birth certificates. However, much of the rest is now gone.

In a way, many things can be replaced, but not everything. That long list includes her journals filled with memories and thoughts from her life. She’s journaled most her life. There were chronicles of events and virtues her parents instilled in her about being humble, grateful and helping others—the journal she was going to pass down to her kids. 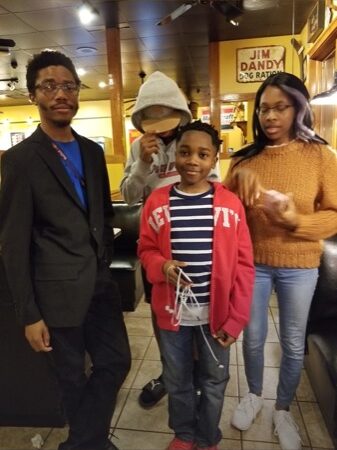 They detailed her past abusive relationship (something she’s been hesitant to share with them), the time they spent living in a car when she took her kids and left the relationship. She also wrote about working multiple jobs until they moved into a hotel, an apartment and then a house.

“It didn’t happen in six months. It took a long time to get here,” Mujaahid said. “I won’t say it was easy because it wasn’t, but God was looking out for us. Not one time did anything happen. Nobody ever broke into the car. The kids never went without food. There was never a time when we didn’t have enough gas to keep us warm in the winter. Even though we were on the streets, we were never on the streets.”

That grind never ended. Choosing jobs that allowed her to bring her kids, she worked at a Waffle House and a Ladies Workout Express, both for over two decades. All the while, she raised and supported five children.

Whether it was the work she did back then, or the three jobs and her passion for running now, her kids have always watched in awe.

“When you see where she started and where she is now, it’s pretty interesting,” said Mujaahid’s daughter, Maryam. “I’ve watched the journey firsthand, and there are some parts that most don’t know about, but I think it’s helped her to get where she is now. The strength she has to continue to race, watching her do these things is really exciting. She’s an example of continuing to grow and achieve as much as you can.”

Always Growing
Mujaahid wasn’t looking to add anything to her plate after getting injured in a USATF masters race in 2009. A hamstring injury might’ve stopped her, but her ultrarunning physical therapist sent her down a Google rabbit hole.

By the end of the year, she was attempting a 24-hour race in November and a 100-miler in December. Fueling with Red Bull, Coke and McDonald’s, she learned on the fly how to run ultras—it even got her to the finish line of that 100-miler with just 30 seconds to spare.

If anything was a metaphor for her triumphs, this was it. An opportunity to push, grow, get better, fail and succeed was something worth fitting between work and parenting. 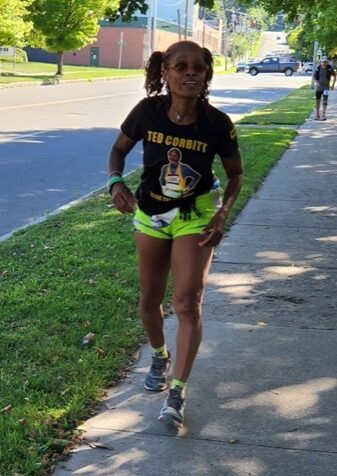 As you may have guessed, she went all in. Over a decade later, she’s got results on UltraSignup that appear endless. You’ll see a long list of finishes, DNFs and distances from all over the country. There are a variety of results from events like the Last Vol State 500K, Six Days in the Dome and the 6-day event at Across the Years.

Each race was a gateway to the next goal or challenge. The height of that growth came in 2021 when she attempted to run an ultra every weekend.

Logistics were the biggest challenge. Mujaahid sought races close to home, but that wasn’t always possible. Regardless, 90 percent of the time, she drove, whether it was an hour away or 20-plus hours away in Arizona, sometimes arriving after a race start because of a Friday night shift. Her eldest daughter and son sometimes took turns driving, but most often they were home babysitting their youngest siblings.

“I’m sure people wonder why she shows up late, but life happens,” Maryam said. “Honestly, it shows how much she enjoys running and racing because she will still try to get out there no matter if she starts with less time. She still completes the same race. That’s the spirit of it all.”

In total, Mujaahid attempted an unfathomable 47 races in 2022, finishing 37 with 10 DNFs. Seven were 100-mile finishes, and one was a 314-mile finish at Vol State. None of it was for accolades—for Mujaahid, it’s part of her journey.

She isn’t totally sure where her strength comes from. When asked, she believes it’s from a lifetime of work and passion for the things that matter: her family and now running, in that order. “If my truth helps one woman, one man, one child, one anything, I don’t mind sharing,” she said. “I’m not embarrassed about it. I don’t feel ashamed. I knew I was going to tell my story. It was set to happen in my life, but it’s also a reason for me to be able to stand tall now to even be able to tell it.”

“All the bruises wash off. I believe I’m meant to be where I am, and I’m planning on enjoying the ride to what’s next.”

In 2023, racing is on pause for Mujaahid. Since the fire, she hasn’t really been running. Time hasn’t allowed for it as she deals with the aftermath and is forced to rebuild again. She and her family are currently staying with her cousin and the hope is they can save up for another home this year.

Most of all, she is trying to stay positive.

“You get really, really angry because you don’t have time to rest or time to cry,” Mujaahid said. “But realizing that you can cry doesn’t mean you’re not a rock for your family anymore. It’s just letting your emotions out in a different way. The important thing, for me, is showing my kids I’m down but I’m still up.” 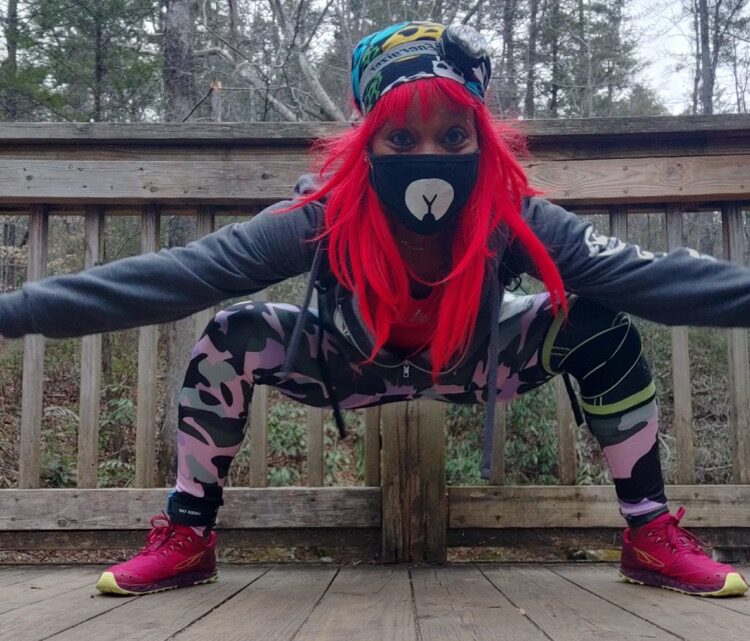 She still maintains her goals. The next stop on her journey is two-fold. First, she wants to join the exclusive “100 100-mile finishes,” club which currently boasts only 23 names. Second, she hopes to run two 200-milers and 12 100-milers in consecutive weekends, and possibly more, if all goes well.

By Mujaahid’s count, she’s finished 67 100-mile races. It’s only an estimate because many of her buckles and trophies were burned in the fire. It will take time to gather records from race data, but if all goes well over the next two years, she hopes to hit her 100th 100-miler in 2024.

In fact, her journey continues next week with a much-needed getaway to the HURT 100 in Hawaii. Already booked and paid for, it’s another blessing because her entire family is going.

“There are still so many things to accomplish, but I want to do it more with my family,” Mujaahid said. “A positive out of all of this is getting a deeper, spiritual connection with my children. They’ve been checking on me a lot and letting me know, ‘We don’t need a big Christmas’ and they’ve been so protective. It’s been good, I can say that.”

A GoFundMe was set up for Mujaahid, who is an ambassador for UltraRunning Magazine, but it was taken down after negative comments were posted. She is still accepting donations. Anyone interested in donating to Mujaahid’s family can do so via Venmo (username: @Jameelah-Abdul-RahimMujaahid) or via PayPal (username: @JameelahMujaahid).