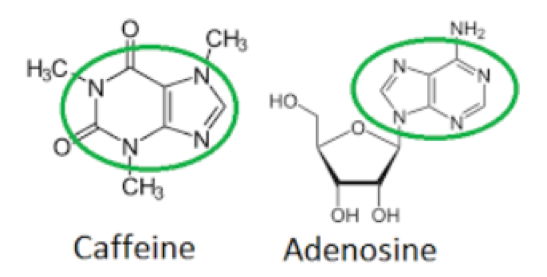 Increase the Benefits of Caffeine in Ultras

Caffeine is all around us in the form of coffee, tea and chocolate, but most runners don’t have enough knowledge of the substance to maximize its effectiveness. This natural stimulant can be incredibly beneficial when used properly, which is why there are International Olympic Committee (IOC) rules on using it excessively in competition. This super food can also be under-utilized in ultras, leaving its benefits often untapped on race day.

You’ve likely been told that drinking Coke will lift your energy level if you’ve felt tired late in an ultra. Most runners find that it does work as a pick-me-up. In my first 50-miler, I got to 40 miles and felt the signs of hypothermia creeping in. My pace had slowed, and I was getting very cold and desperate. I stuffed a handful of M&M’s into my mouth and drank two thirds of a can of Coke at an aid station, then forced a faster pace to generate some heat. My condition gradually improved, so I repeated the M&M’s and Coke at the next aid station. Soon, I was flying past runners. With two and half miles to go, I caught up to my friend, Bill, who was shocked to see me pass him for the first time ever in a race. I finished 10 minutes ahead of him. This is a powerful example of the effects caffeine and sugar can have on an exhausted body.

A few of caffeine’s positive benefits:

The word “caffeine” is a simplification. In scientific terms, caffeine is one example of a class of chemicals called xanthines. The examples we know well are the caffeine in coffee, theophylline in tea and theobromine from chocolate/cocoa. Each has a xanthine-base structure with three radicals attached like Legos to the xanthine. The attachments are either hydrogen or methyl radicals, and that’s what makes them different. See the figure below for the similar structures of the chemicals: 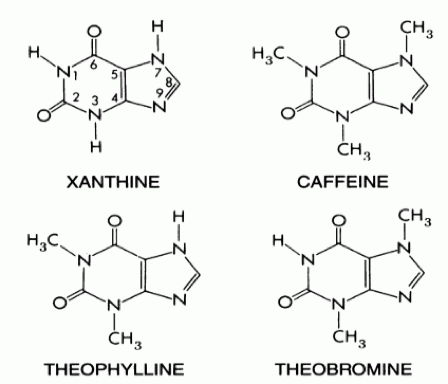 They are all stimulants, but the speed at which they react and leave the body is different. Caffeine is absorbed quickly, producing rapid effects that peak at around 70 minutes, then fade over a few hours. The effects of theophyline from tea come on somewhat slower, but last longer. Theobromine from chocolate is even slower, but lasts for many hours. Fortunately, there’s no rule that you can’t use multiple forms simultaneously. For example, you could take caffeine and chocolate together to get a fast “up” with a long response.

How does caffeine work like this? The answer is very interesting and sheds light on some mysterious things that can happen in an ultra. The answer starts with the energy carrying molecules that fuel muscle contraction – adenosine tri-phosphate or ATP. Adenosine is an organic structure that can hold phosphate radicals (either none, one, two or three). When a muscle contracts, it gets energy from stripping off one phosphate molecule: ATP goes to ADP (adenosine di-phosphate or ADP). The ADP can give up another phosphate, and then another until there is only the adenosine left.

In daily life, that process is reversed continually throughout the body. The very important reaction is:

And then the process of using the ATP starts all over. If either water, energy, phosphate or adenosine are in short supply, the reaction is hampered, resulting in weakened muscle response. This is common when energy is in short supply and adenosine is locked up in adenosine receptors, such as late in an ultra. It may look as if adenosine is just a carrier for the phosphate energy, but adenosine all by itself has many profound effects in the body because it also acts as a neurotransmitter affecting nerves and the brain.

When energy is used in large amounts, faster than the ATP can be re-built, adenosine collects in the body. This is commonly seen late in an ultra when fatigue sets in. Adenosine leads to nausea and the inability to eat well – even foods that are a runner’s favorites may become inedible when deeply fatigued. Extra adenosine can also lead to a feeling of impending doom. That can cause a runner to just sit down and give up. After energy recovery, the runner then wonders why he or she gave up. Adenosine has many more effects, but those are beyond the scope of this article.

The human brain has different sensors in the body to inform it of physical well-being. The brain knows about one’s adenosine status by four different types of adenosine receptors. The unused adenosine binds to those receptors like an adenosine “key” in a receptor lock. Something else fits into those receptors so well that it kicks the adenosine out of the receptor. That something else are the xanthines: caffeine, theophylline and theobromine. They take the adenosine out of the receptor lock so that 1) the brain is not getting a fatigue message, and 2) the adenosine is more available to be reacted with phosphate. See the figure below for the structure of caffeine and adenosine (note how caffeine has a similar structure to adenosine):

According to the list of ingredients on a can of Coke, it contains: water, a big dose of sugar, phosphoric acid (a source of phosphate) and caffeine. The caffeine kicks the adenosine out of the receptors so that the reaction below can proceed:

Otherwise, the adenosine is attached to the receptor and is not available to make more muscle fuel.

In my aforementioned 50-miler, I added M&M’s for the xanthine in chocolate and some additional sugar. My body responded to the chemical inputs and I not only avoided impending hypothermia, but also flew to the finish. I’ve also had PR results in half marathon, marathon and 50k races by using a cup or two of coffee and a fatty breakfast before the race to promote fat burning that spares muscle glycogen.

A note of caution is advisable at this point. When energy is spent like this, the bill comes due. For example, I used some of this chemical manipulation at the Vermont 100 and after finishing, drove back to my motel room. The xanthines had been metabolized by the liver, and sleepiness hit me like a thief in the night. Driving along, I kept waking up, finding the car out of the proper lane. It would have been wiser to have a driver for the return trip.

Interesting article. Question: What about caffeine’s effects on heart rate? Will it not increase HR response? Point being that in an endurance event, we don’t necessarily want the HR to increase more than it is already. Thoughts? Opinions? Thanks.

Really liked the science in this article! Interesting to know what is going on after that 12oz Coke!

Interesting article, I have the strategy to use more gel (chocolate+caffeine) than before for my tomorrow ultra, Cruel Jewel 100. Up to now, I got nausea in all my ultra even if I was able to finish them. On my last ultra I gave up after 60 miles in HURT 100 because of nausea and lack of energy. I was not sure if using coke was a good idea. So, now I don’t see any problem. 👍

Simon see my comment below. I have a more detailed explanation on my blog. The coke could very well have made the nausea worse!

I have used caffeine while running marathons and ultras for years and find it particularly helpful in the later half of a race. The downside for me is that after the race I find it impossible to sleep and stay awake for hours after I go to bed.

The detailed science summary is interesting . The examples of how these interactions affect performance are anecdotal (N=1). Are there more disciplined clinical trials with double-blind treatment and controls to establish if and how much the chemistry translates to human performance?

There is another dark side to caffeine that may be the source if many ultra runners nausea and GI issues. Caffeine is a potent G-cell stimulant. G-cells secrete gastrin from the stomach which causes HCl (stomach acid) release. Take a load of caffeine on an empty stomach and you will acidify the gut beyond what the body can neutralize normally through pancreatic bicarb. This can cause nausea and GI upset at best and at worst – lead to a leaky gut. I figured this out and went from extreme nausea and cellulitis (bacteria escaping my gut and taking up residence peripherally) to finishing 100 miles strong, eating well and no nausea by completely eliminating all caffeine during my 100 mile races. Any supplement has a downside and caffeine is no exception.