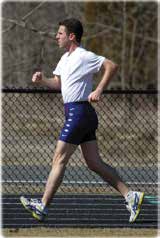 How To Increase Your Walking Efficiency

(This article originally appeared in the July 2013 Issue)

Mention race walking to a runner or ultramarathoner and they usually have one of two reactions: they laugh and mock the hip-wiggling, much-maligned Olympic event, or they speak of it with respect either from trying it themselves or because they were passed late in a race by a steady-paced heel-to-toer. Either way, ultramarathoners should look at race walkers with envy for their efficient technique. They should be an inspiration for improving race times.

In almost all major ultramarathons, there are a large number of DNFs. Running one hundred continuous miles can take its toll on even the most conditioned athletes. Learning a few lessons from their more grounded counterparts could not only increase their chance of making it to the finish line, but could also shave valuable minutes from the clock.

Personally, I was a very mediocre high school runner when I took up race walking. Within two years I was race walking almost as fast as I used to run, completing a 5K in 21:00. During the last 25 years, I have trained countless people to athletically walk or race walk for fun, health and to compete.

Teaming up with two-time Olympian Tim Seaman, we have travelled across the U.S. and Canada instructing people to race walk safely, more efficiently, and faster. Recently, there is a new type of client approaching us for walking advice and they are coming from an unusual source: ultramarathoning.

Ultramarathoners, like 52-year-old David Coats, seek us out to trim valuable minutes during an ultra by not slowing to an inefficient crawl whenever they take a break from running and walk for a short distance. Experienced ultramarathoners know that approaching a race like the Badwater ultramarathon requires strategy that often includes giving your weary running muscles a break. Often we hear that running uses 70 percent of the body’s muscles. Those muscles get tired and need to rest. By switching technique, underutilized muscles can be engaged to shift the burden and allow the body a chance to catch its breath. The simplest way to do this is to walk.

For David Coats, however, the deceleration to walking resulted in a pace that gobbled up time so fast it felt like walking backward. He realized he had to be smarter if he was going to continue participating in ultras, and his coach, Tim Neckar, was supportive of him learning to race walk. That’s where I came in. Coats flew out to learn how to race walk from me in a one-day crash course similar to clinics we give across the country. Typically we teach it over two days in a group setting, but teaching him one-on-one allowed us to cover a lot of ground very quickly.

After an hour lecture on the basics of race walking technique, we hit the pavement. Prior to his visit, Dave walked a strained 15- to 16-minute mile with what he thought of as a good walking technique. Usually, uneducated walkers either sway their hips wildly from side to side or develop a power walker-like style with an exaggerated leg and arm swing. I tried to power walk when I coached. It’s okay for short distances and slow speeds, but as you quicken your step, its inefficiencies become apparent as your lungs need air and your legs fatigue.

When Dave ambled with the straight-leg, hipdriving- forward technique of race walking, he immediately felt more efficient. With hands-on coaching combined with both photo and video analysis, his technique improved. By the afternoon he was clocking close to 12-minute miles, amazingly with less effort than his 15-minute power walk. There was only one problem. Dave wasn’t completely obeying the definition of race walking (see USATF Rules).

Dave had no problem keeping one foot on the ground at all times, especially when viewed by the human eye. He needed to develop his race walking-specific muscles more if he were to push off and gain a small flight phase. His issue pertained to straightening the knee at the moment his foot made contact with the ground. He could straighten it, but bent it prematurely before it reached the vertical position.

Not one to be a purist, I asked Dave if he cared. In the short run, and at the speeds Dave was trying to sustain, he probably could walk faster and train easier if he didn’t try to master the last one percent of race walking technique. He agreed not to worry and we focused on making his walking as efficient as possible. We concentrated on good posture, pushing off more with the rear foot, keeping the foot low to the ground as it swings forward, landing with the toes pointed up at the moment of impact, holding the arms at an angle between 80 and 90 degrees, and swinging the hips forward with each stride.

Dave tried to straighten his leg at heel strike and maintain it through the vertical position, but didn’t obsess over it. With a little bit of training, he was comfortably walking 11:30 per mile in workouts. Over the next several months, he was able to achieve a pace of about 10 minutes per mile walking for distances beyond 10 miles. His race didn’t go exactly as planned, but he did credit the pseudo race walking technique with shaving more than an hour from his race with a finishing time of 40:45:06 during the 2012 Badwater.

So, while you may not walk a sub-six-minute mile like a world-class race walker, if you learn the technique and put in some time on your feet, you could be walking between 10-12 minutes per mile and advancing to the finish line much sooner.

Race walking is a progression of steps taken in such a way that the walker makes contact with the ground so that no visible (to the human eye) loss of contact occurs.

The advancing leg must be straight (i.e., not bent at the knee) from the moment of first contact with the ground until in the vertical upright position.

While it’s impossible to explain all the subtleties of race walking, here are the basics as shown through a sequence of photographs.

Straightening the Leg Figure A shows where the heel has just made contact with the ground. A few things happened simultaneously. Just before contact, as the leg was swinging forward, it straightened, with toes pointed up (about 20-30 degrees from the ground), and the heel struck the ground. Achieving this smooth, synchronized action is the key to success.

Once the leg is beyond the vertical position, as in Figure D, you may bend it. However, when it comes time to lift your heel off the ground, if your leg is still straight, you get an extra thrust forward by pushing off your rear foot (Figure E). Through proper flexibility and strength your leg stays straight longer and you obtain this advantageous thrust. Figure F shows the stance, just after rear-foot push-off, with an obvious bend in the leg. It is impossible to race walk with any efficiency and keep the leg straight as it swings forward. Notice that as the rear (left) leg leaves the ground, the front (right) leg is already in position. Also note that the legs do not create a symmetrical triangle. More of the stride is behind the body than in front. This is achieved through proper hip action.

To remain efficient, race walkers must pay careful attention to how their legs swing forward after push-off. Race walkers swing the legs forward with the knee as low to the ground as possible. While some upward motion is necessary to break contact with the ground, it should be minimized. Therefore, when the rear foot lifts up, it rises only an inch or two off the ground. This is seen in Figures G through I.

Using your legs properly gets you moving, but to go really fast you must learn to use your hips correctly. The hips are the body’s primary source of forward locomotion. When we rotate the hips forward, the swinging leg is pulled off the ground. As we repeatedly pivot the hips forward, they act as the body’s motor, propelling it forward one step at a time. This also lengthens the stride from the top of the legs while increasing stride length behind the body. Figure J demonstrates stride without hip drive, while Figure K shows the additional length obtained as the left hip extends forward.

Proper use of the arms is key to mastering the hip motion just described. Synchronizing arm and hip motion maximizes efficiency and speed. Each arm should travel from a couple of inches behind the hip to just above the chest line (Figure I). You generate the primary power for arm movement by driving the shoulder on the backward swing of your arm. Do not try to generate power by wildly pumping your arm backward or thrusting it forward. Just use the shoulder as a fulcrum and let the arms swing like a pendulum.

The principle of good race walking posture is fairly simple. Your body is straight up and down throughout the entire stride. Years ago, walkers believed proper posture meant leaning from their ankles; however, to do so, they often bent from the waist instead. Such bending reduces the ability to extend the hip and accelerate the stride.

If you are interested in more information about race walking or attending a weekend clinic to master its technique please check out www.racewalk.com or www.racewalkclinic.com or contact me directly at [email protected]