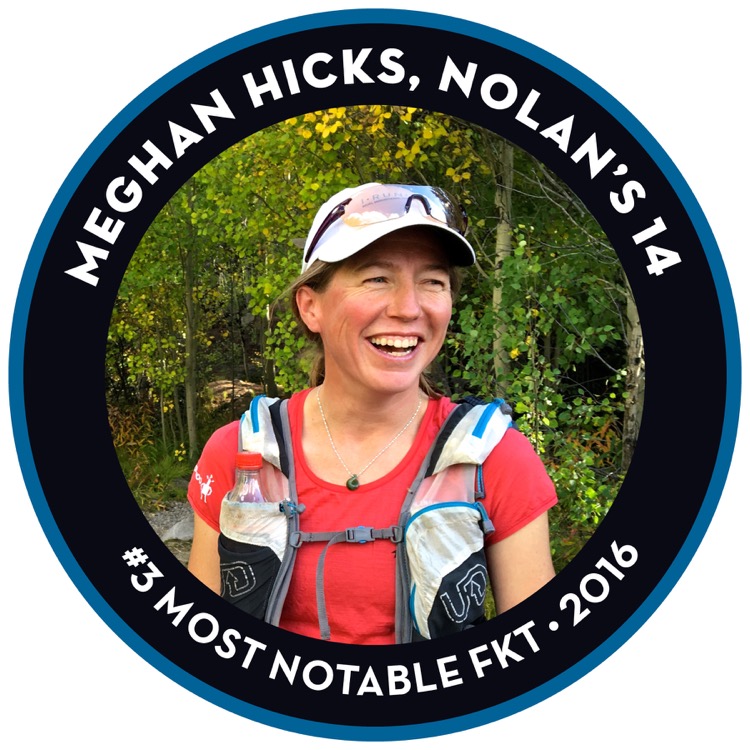 Hicks and Meltzer named #3 Most Notable FKT of the Year

Fred Vance’s concept of “How many 14ers is it possible to climb in one shot?” has gone from obscurity to relative fame, as multiple attempts are now made every year. The Sawatch Range in Colorado has 14 summits over 14,000’ high – somewhat lined up in a row, with few trails, continuous rough terrain, navigation challenges, and of course, serious vert. The cutoff time to ascend and descend all 14 is 60 hours. Meghan was the 17th finisher and first woman to tag all 14 peaks over the roughly 100-mile route in that time (Anna Frost and Missy Govney earlier had reached the 14th summit within that time but paused on top). Meghan’s effort was Supported and she completed it in 59 hours and 36 minutes.

Meghan Hicks is a 38-year old senior editor of iRunFar and lives in Moab, Utah. Hicks, who has degrees in Geology and Resource Interpretation, has worked in preservation and interpretation roles at three National Parks. Hicks has a special fondness (and talent) for long adventures on foot in wild places. She won the Marathon des Sables in 2013 and has also completed the 205-mile Tor des Geants in the Italian and French Alps.

The original long trail, both in terms of when it was established (1932) and its long FKT history (first thru-hiked with great publicity in 1948). No route has this history, which includes David Horton, Pete Palmer, Andrew Thompson, Jen Pharr-Davis, and Scott Jurek. This was the Speedgoat’s third try and he took about 9 hours off Jurek’s time from the previous year. Demonstrating classic FKT ethos, Karl supported Scott on his attempt, then Scott returned the favor. Meltzer covered the 2,189 miles from North to South in 45 days, 22 hours and 38 minutes.

Karl Meltzer is a 49-year old ultrarunner, blogger and coach living in Utah. Meltzer has completed over 100 ultras, with 52 wins. He is especially adept at 100-mile races, having won a record 38 hundred milers, including at least one in each of the past 16 years. The outspoken Meltzer is perhaps most known for his mantra: “100 miles is not that far.”