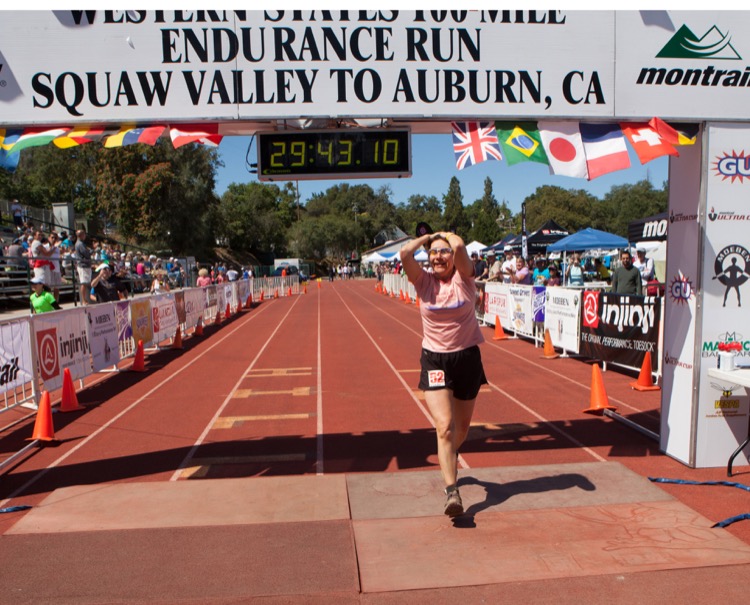 Have You Ever Wanted to Photoshop Your Finish Photo?

I think I’ve developed a very bad habit. It started with my first marathon, which I actually thought would be my one and only marathon. It was a Rock ‘N Roll marathon, so there were thousands of runners and they all seemed to be in my finish photo, especially one gargantuan pair of thighs in black jammers floating right above my head. Cut off from the waist up, the headless runner was a complete distraction. Since it was before the days of digital race photos, I called to see if they could just zap out those floaty thighs by my head. They said yes. I purchased that photo for years to come.

Somehow, when I started doing ultras, my Boston qualifying time started to get within reach. I missed the time by two minutes, then one. Finally, I qualified by 16 seconds. I thought a turtle runner like me would never make it to Boston, so I couldn’t wait for that finish photo. A horrific weather year on the heels of a Nor’easter, everyone was bundled up in tights and jackets. Except right behind me at the finish line was a girl flashing the camera! OK, she wasn’t exactly topless, but since she had pinned her number to the bottom of her race bra, she unzipped and pulled her jacket wide open with a huge grin, to expose her race number. But it looked like she was exposing everything else! I tried to focus on my own winning smile and perfect fist pump, but all I could see was that girl flashing her chest to the camera. So she had to go too.

At the top of the photo list, would be of course, the coveted Western States 100 finish photo. But I never seemed to get picked in the lottery. Everyone used their Western States (or other hard-fought race like Leadville, Hardrock or Badwater) finish photo as their profile photo. Every time I went to the Monsters of Massage in Auburn, there they all were – photos of all the local WS100 finishers, including Tim Twietmeyer’s. I fantasized about one day having my finisher photo on that wall, maybe squeezed in beside the 25-time finisher’s photo.

But things happen during a 100-mile race. The year I finally got in, it snowed during the race (so much for all that heat training). At the river crossing, my ankle got caught between some boulders, so I was stuck up to my shoulders in that icy-cold snow runoff for several minutes. I tried to shake off the cold on the climb up to Green Gate, but since it was only 40 degrees out, I never warmed up. It was 4:00 a.m., my teeth were chattering audibly and my legs just didn’t want to cooperate. I could tell I was hypothermic. I thought, “What would Bear Grylls do?” He’d strip naked. So that’s what I did. When I got to my crew, we completely changed every inch of me into whatever dry clothes we had left. Not a problem, because I had obsessively picked out a finisher outfit, with my favorite tank, white Oakley sunglasses and white baseball cap, and saved it in my last drop bag. I would change into that at sun up, taking no chances on my finishing photo.

But with neck and back injuries from a car accident, I was pressing awfully close to the cutoffs all night. In fact, when I heard the horn at the Highway 49 crossing, I thought that was it, I was out. But it was a warning horn. I had five minutes to get out of that aid station! It was chaos. There was no time to change my top. No time left to change out of my yellow-lens sunglasses that I wear only at night with my headlamp so I don’t get a headache from the halo glow. And my hat, where was my hat? JUST G-O-O-O-O-O!

So I flew out of that aid station, my adrenals in overdrive. While trying to run up the hill, a crew member tried to shove a strawberry smoothie into my hand, but it just spilled all over me. No time, no time. I gunned it, making up time on the downhill to No Hands Bridge. I finished just ahead of the final cut off.

But since I’d just read Scott Jurek’s book that recounted the story of the lead runner who collapsed on the track mere yards before the finish, I didn’t want to stop, talk or savor my victory lap on the track – not until I crossed that finish line. I just knew I’d be that person that missed it by seconds. So I desperately ran the whole way through to the finishing chute with every last ounce I had left in me. It was probably the happiest moment of my life.

But then I saw the photos. I didn’t look happy! I had gained 12 lbs. during the race. (Yeah, I know, I’m probably the only person I know that actually gained weight during a hundred – too much sodium.) My face was super puffy and I still had on those night-time yellow lenses! I looked like a bug. And my shirt! I never got to change my shirt! So I had this clingy, faded coral shirt that was so not-my-color. Plus, in the crazy push at the end, one of my crew members took off my CamelBak. I never run without my pack! I looked like a tortoise without its shell. And now, that clingy, short-sleeved shirt showed off my armpit stains and stuck way too closely to my sweaty “other headlamps.” (Perhaps this was karma for cutting out the girl flashing her bra?) And that smoothie? It looked like vomit running down my leg. I had helmet head instead of my white baseball cap. And the look on my face? I think it was the same expression I had when I made that final push during childbirth – after all the drugs had worn off. 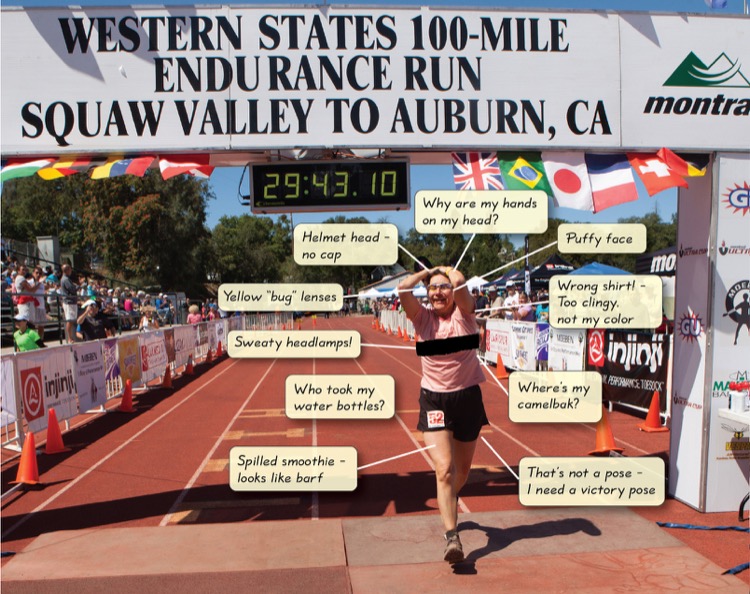 After seeing these pictures I thought: No. This is not the Western States Finish photo I had envisioned. This photo is never going to see the light of day, and it’s certainly not going to sit on the wall next to a Western States Champion like Tim Twietmeyer!

When local running Hall-of-Famer Rich Hanna was nice enough to congratulate me on my finish, I went on and on about how bad my photo was going to be, and how if ever any photo needed to be Photoshopped, it was this one. After belaboring my photo woes, the always helpful Hanna said, “Are you serious about wanting to Photoshop your picture? Because if you are, I have a guy.” What? You have a guy? So the plan was hatched. When I could finally walk, I would put on my very special outfit, go back to the Auburn High School track at exactly 10:43 a.m. so the sun would be at the same angle as my finish time and re-snap a series of pics. Then I was going to send those retakes to his graphics guru to do a quick swap. At last, I would have that triumphant Western States finish photo I had always dreamed of.

But then came the emails and messages: “Deb, congrats for your finish! Love the photo. So brave.”  Photo? What photo? The race site had posted my photo and in minutes it already had 73 likes. Noooooooooo!  This was not the plan!

When my pacer, Bruce, called and said my photo was on the Western States 100 website, I told him of my dismay, as I was planning to Photoshop my finish photo. He said, “Deb, you’re not supposed to look good after you run a hundred miles.” Didn’t matter. It was still the worst race finish photo I had ever taken, yet it was the most important one. 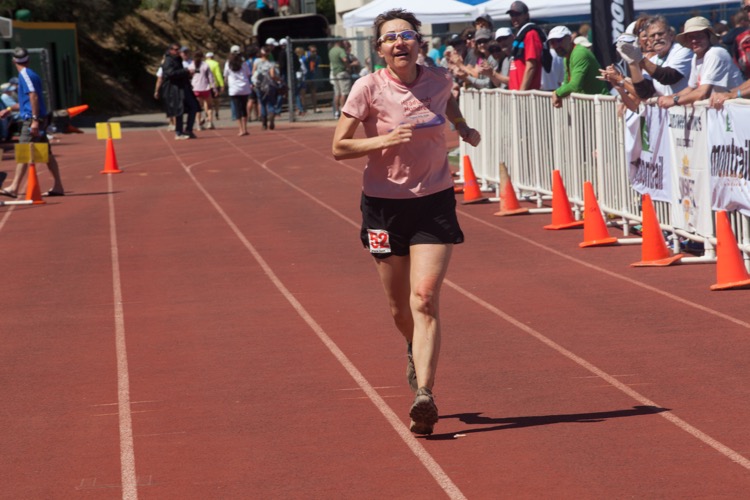 Photo on the Western States website that started it all. Photo: Joe McCladdie

I just couldn’t figure out why the photo was getting so much attention. But after several more calls came in, I looked at the photo again and understood. It was because that one flashing moment told the story. It was the singular moment when all the training, all the doubts, all the worries, all the planning, was just about to give way to relief, triumph… and pure joy. I knew I was going to finish. It was the moment I had been working toward for ten years.

Did that stop me from photoshopping my finish photo? Of course not! The idea was so over-the-top that it had to be done. And while we were at it, I thought why not just change the nine to a three and make the finish time 23:43? You know, a silver belt buckle and all – but really, that would just be going too far, even for me. So if by chance you ever find yourself in Auburn, and happen to go to the Monsters of Massage, check it out – you just might see which finish photo made it up on their wall. 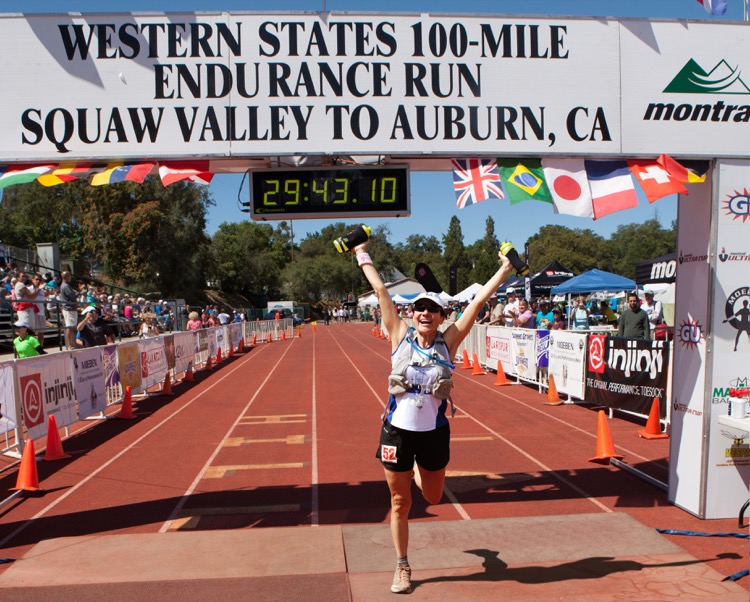 haha I loved this story…I laughed, cried…totally understand. I love both of your photos. You are amazing.

best read for awhile thanks you look Marvelous!!

the original is perfect. dont change a thing!

This is hilarious. I had a similar Western experience with mint-green shorts and no time to change at 49 crossing. All of the dust accumulated on my shorts and I look like I had an “accident.” There’s one photo that hides the ridiculous dirt stains — but the rest of my Western photos have been banished from the internet. Great story and great photoshopping.

Hi Deb…my WS finish is up on the wall at the Monster…no photoshop there. It shows how I really felt when I got done…it really was an honest finish photo 🙂 Nice read.

This is amazing. I laughed so hard. Yes, yes to all of this.