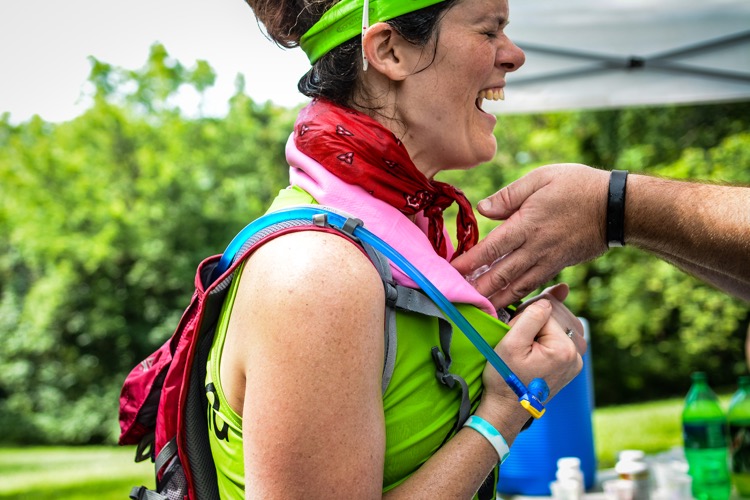 Grizzled Veterans and the Stupidly Stubborn

The ninth annual Psycho Psummer 50K had its share of problems leading up to race day. Constant weekly storms, dumping more than twice the normal average rainfall from March to July, caused indecent amounts of verdant foliage to strangle the trails, and also caused large trees to topple. Luckily, we had a willing cadre of volunteers that weed-whacked the trails clear and chainsawed the toppled trees.

Even with all the hard work, we still had to make a decision about how to change the course to protect our nice single-track from damage. We decided to use a modified version of our winter Psycho Wyco course, which includes copious amounts of equine-churned bridle trail. With the constant rain, about one-third of the 50k course trail had the consistency of thickened chocolate mousse.

The mud conspired with a humid 94-degree race day to shatter a few records. Nobody finished under four hours. Nobody finished in under five hours. In fact, nobody finished in under six hours! We had 72 starters but only 19 finishers. It became a test of will: only grizzled veterans and the stupidly stubborn survived to finish the 50k. Todd Nott, Jeremy Morris and Aaron Norman came through the finish as the first men at basically the same time, working together as friends. Stephanie Cundith stayed ahead of the female field and toughed it out solo. Mindy Coolman, Christa King and Sarah Timberlake were the only other female finishers, in that order. The other finishers can decide which category they were in that day: Grizzled Veteran, or the other.

Trail Nerd volunteers know how to put on a safe event. Constant attention to the runners, including medical attention and 1,000 lbs of ice, kept heat-related sickness and other major health issues at bay. There may have been a few strained hip flexors and a handful of leg cramps, but other than that, we got through this race safely, once again.