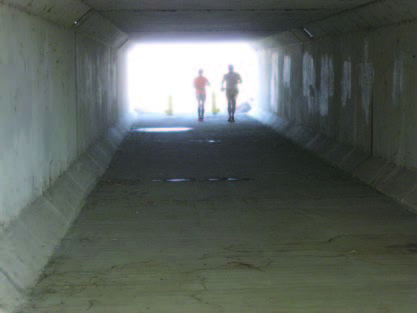 You’re in Virginia running through a dark forest on a ridge above the Shenandoah Valley. You’re exhausted. It’s about 24 hours into the race and the first hint of dawn is turning the black forest into a shadowy gray ghost world. Up ahead you spot a big horizontal shape and a vertical shape sticking up behind it.

By God, you see it clearly now. It’s a pair of long-haired girls sitting behind a piano. Wait a minute! You’re closer now. It’s a guy riding a chopper with long handlebars, right out of Easy Rider. A few steps closer and, hold on, for crying out loud, it’s actually a big crashing wave with a dolphin leaping up behind it. Wow, you wouldn’t have thought there’d be a wave crashing over the forest floor, would you?

But there it is. Each vision was as distinct and vivid as a cellphone snapshot, but the dolphin and its wave dissolved when I got even closer and directed my flashlight beam at a big chunk of fallen tree trunk with a bushy little sapling sticking up behind it. No girls, motorcycles or sea dwelling mammals, just underbrush. The Massanutten Mountain Trails 100 was now getting to me, and my eyes were playing their weird tricks. A few minutes later I ran through an area full of tree stumps, which at first I could have sworn were robot men buried up to just below their shoulders in the ground.

Running through the night is one of the great adventures of ultrarunning and not to be missed, but you need to be prepared for some strangeness, some altered states of consciousness and possibly some very disconcerting hallucinations.

The dark, the often unfamiliar territory and the crazy bouncing beam of your light all unite to make running at night a pretty strange experience, even when you’re feeling chipper. Add in fatigue and exhaustion from running all day and your body’s natural desire to shut down at night and sleep, and you really face a challenge. The shadows from weeds in and along the trail become skittering animals under your feet. Your flashlight beam touches an overhanging branch in your peripheral vision and it becomes a leaping mountain lion. Diminished depth perception flattens out the roughness of the trail and you get tripped up. Be sure to practice some night running before your big event so you can dial in your lighting and get accustomed to the shadows, the footing and the feel of running in the “tunnel” of light that your beam creates.

With exhaustion, your mind loses its sharp focus and you can start making some bad judgments. I have a tendency to start questioning the markings on the trail. I’ll convince myself that the last confidence marker was miles back and conclude that I’m off course. In one race I turned around three times to backtrack to the last flag only to encounter the same two women coming up behind me who assured me I was still on the right trail. Your concentration can lapse and you can miss a turn. Time seems to stretch out and one hour’s run to the next aid station can feel like four hours. Trying to calculate your pace and finish time or time to the next cutoff can be wildly faulty. Better to just keep going as long as you’re making the cutoffs and let things play out rather than conclude that you’re not going to finish. A tired mind will also cast about for excuses to quit. Be ready to summon up your unreasoning and illogical determination to finish. The bizarro reason and logic of your 3 a.m. mind might be leading you astray.

And then there are the visions you can get when the light is dim and your eyes start manufacturing things out of any indistinct shape nearby. If I stare at a tangle of branches long enough, my mind will inevitably create something sitting on a branch looking back at me. My first ever vision came in the morning hours at Angeles Crest as my pacer and I were making our way down to Pasadena. We were in a canyon and I saw two enormous cartoon figures that had been constructed on the canyon wall opposite the trail we were on. It never even occurred to me that they weren’t real. I thought to myself, Well, Hollywood and the movie industry are right down below us. These must be some kind of enormous set.

“How do you like those cartoon figures?” I asked my pacer.

He looked at me, looked at the canyon wall where I was looking, and said, “Those are just rocks over there.”

Runners also often report straight-out hallucinations, such as another runner running beside them, or runners or bodies of runners lying next to the trail (although sometimes you do see a real live runner sprawled out next to the trail). I once approached an aid station where a guy was standing in the doorway of a lit up tent talking to a girl who had the hood of her green sweatshirt pulled up over her head. I went into the tent and sat down, noticed the girl wasn’t there, and asked the guy where his friend went. He said he was working the aid station alone.

All this can get pretty spooky. Running with a pacer or another runner will cut way back on the fear factor. If you’re alone, you need to simply accept the strangeness as part of the process of running through the night. If nothing else, a couple of frightening visions will keep you on your toes and help you fight off the urge to sleep. Plus, what is ultrarunning all about if not adventure, and believe me, the night can be full of adventure.

Congratulations! Great article… It almost makes me want to try for 100 miler for the hallucinations!