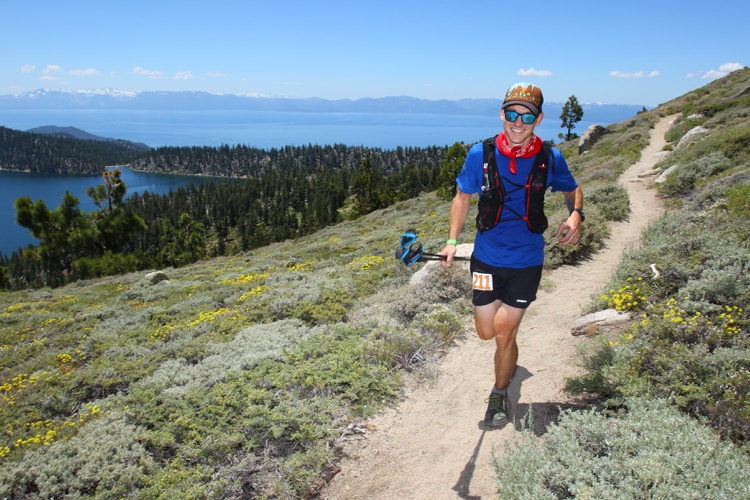 I knew I was ready coming into the Tahoe Rim Trail 100-Mile Endurance Run. I had done the work. Nearly 1,400 miles in seven months leading up to the race, four 50ks, and the Silver State 50 miler were all under my belt. As race week approached, I quickly evaluated my year-long goal of running TRT in less than 24 hours, flip-flopping on whether or not it should be my goal. I had finished the race the year before and clocked just over 25 hours. I knew I could go sub-24, but it wouldn’t be easy.

Self-doubt was taking over in the days leading up to the race. But, while drafting up some logistics for my crew, it hit me: Sub-24 is my goal. Believe in yourself. Unlike my other races where I had clear A, B, and C goals, this time I had one goal. And I needed to own it. I wrote my crew and let them know my intention was to find gold on the TRT course. I had earned a silver buckle the year before for finishing the course in under 30 hours and now, I wanted that sub-24 gold.

The course is a 50-mile out-and-back, run twice. I broke it down into four sections: start line to Diamond Peak (30 miles), Diamond Peak to Stonehenge (20 miles) – then do it again. The plan for the first 30 miles was slow and steady. I needed to get to Diamond Peak, where I would see my crew for the first time, feeling fresh. However, to my surprise, I did not feel fresh. My legs were heavy and unresponsive and my stomach was unstable. I debated for the first 30 miles if this was going to be the day I had hoped for. However, like a stubborn ox, I stuck to my anticipated time and pushed through my cement legs and upset stomach.

When I rolled into Diamond Peak, my crew was ready for me. Like a Nascar pit crew, my wife, Alison, and friend Claire sprayed me with sunscreen, emptied my vest of trash, switched out my bottles, put ice in my bandana, hosed me down and pushed me out of the aid station. They came prepared, and I was very impressed with their efficiency. I was soon on my way up the dreaded Diamond Peak climb: nearly 2,000 ft of gain in 1.9 miles.

I put my head down and hammered. I had trained hard on this climb and knew it well. As I approached the summit, I realized for the first time all day that I was feeling really good. My heavy legs broke free and I was finally ready to fly. I moved quickly through the next 18 miles, making sure to focus on hydration and nutrition and I knew the sub-24 buckle was possible.

I came into Stonehenge (mile 50) at 10:29. For the first time, I saw my entire crew: Alison, Claire, Jeff, Jackie and Steve. They did not expect me this early and lit up like a Christmas tree when I cruised into the aid station. After some words of wisdom from my friend Jeff (who would be pacing me through the night), some TLC from my crew and a kiss from Alison, I grabbed my buddy Steve (pacer) and we set out for the second half.

Steve kept me on track, hiking the climbs to Hobart (mile 57) and pushing me to actually run the runnable sections. He made sure I focused on hydration, nutrition, and staying on track with the goals we discussed. On our way down to the Red House aid station (a six mile loop), Steve threw out a lofty goal, which I quickly griped was not possible. I had taken off my watch, so I was relying on Steve to let me know what our pace and mileage was. Our goal was to get back to the Tunnel Creek aid station (mile 68.5) before the sun set at 8:22 p.m. This was the goal I had set for myself, but I was 15 minutes behind schedule, so it seemed unattainable.

I’m not sure what happened, but Steve and I ran the Red House loop quickly. I think he told me we were going slower than we actually were (since I did not have a watch on, I believed him). Next thing I knew, we arrived at Tunnel Creek at 8:07 p.m., well before sunset. Gold was on the table.

As I literally stumbled into Diamond Peak, I had succumbed to my negative thoughts. I lost hope and drive. I felt myself giving up and envisioned 24:05 on the clock at the finish. It was over. I became angry with myself that I ruined my day with this unobtainable goal. All the training runs, all the time away from my family — everything was for nothing. I was disgusted with myself that I was so hung up on a clock, and that 24-hour time. However, my incredibly supportive crew would have no part of my pity party and negative thinking. They wouldn’t even entertain it.

“You are doing this,” my wife Alison said. The rest of my crew broke down the math and explained what I needed to do over the next 20 miles to break 24 hours: I needed to run 18-minute miles. They said I could do it, but still I did not believe them, especially with the dreaded Diamond Peak and Snow Valley Peak climbs ahead. My crew kicked me out of that aid station, believing in me.

Jeff took a leap and decided he was going to run ahead of me and quickly drag me up Diamond Peak. He knew from our many training runs that I’m stubborn and would follow, regardless of what I was thinking or saying. So, on he went. For the next 13 miles, I followed Jeff like he was a carrot and I was the horse. The carrot was always 10 steps ahead just out of reach. I threw myself up the climbs, ran what was possible, and did all I could to stay close to Jeff’s headlamp thinking to myself, “That beam is my gold buckle. You are so close – keep pushing.” There was no time for talking and no time for comfort. We were on the bubble and we needed to move.

As we approached the final climb up to Snow Valley Peak (mile 93), I looked at my watch and saw we had just hit the 22-hour mark. I immediately felt a huge weight lift off my shoulders and vanish into the star-lit night at 9,600 feet. 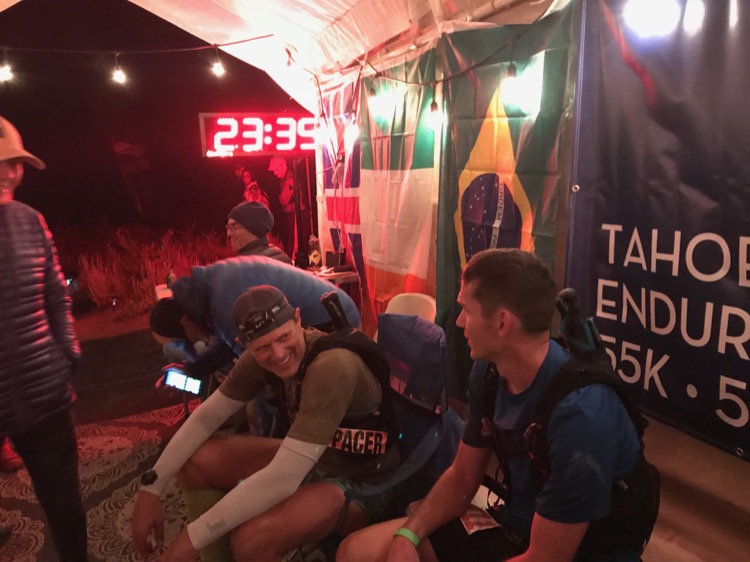 Alex and his pacer Jeff at the finish. Photo: Alison Humenetskyj

I shouted some ecstatic, euphoric expletives at Jeff, thanked him for dragging me up the mountain and his brilliant approach to pacing. Then we took off for the final seven miles, getting closer and closer, smelling the barn and visualizing that sub-24 finish.

Jeff finally slowed down 30 feet from the finish line, looked back at me and said, “Go taste that gold,” and I took off. It was finally done: 23:34:23, 13th overall and third in my age group. With the help of my crew, who believed in me, I finished TRT 100 in under 24 hours. We all struck gold, and it tasted pretty damn good.

Crushed it! Awesome race, Alex, and great recap. Love it!!