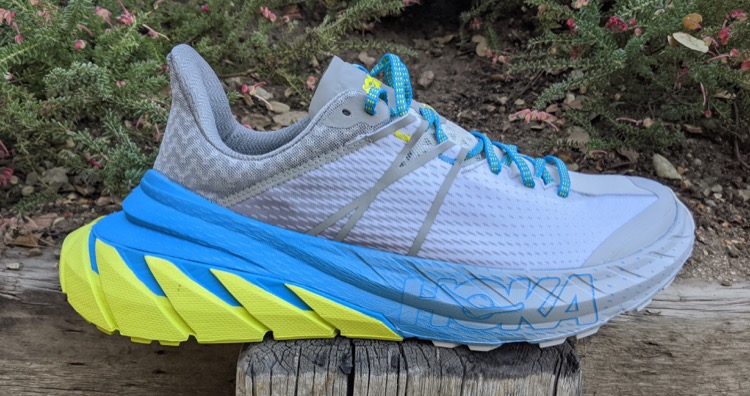 No matter what else you might think about this shoe, one thing is certain: you’ve never seen anything like it.

HOKA ONE ONE is no stranger to innovation. They ushered in the max cushioning movement, and were on the forefront of carbon plate technology with last year’s Carbon X. Now comes the TenNine with a tagline that it’s not just a shoe – it’s a piece of gear that happens to go on your feet. (For simplicity’s sake in this post, we’re still calling them shoes.)

In practical terms, what that means is HOKA completely reimagined the midsole size and geometry of longstanding shoe design, with the intent of providing extensive ground contact for a smoother, more stable ride over any terrain – the TenNine is positioned as an all-terrain shoe, enabling runners to more effectively transfer their natural momentum into forward motion. Another goal is to make it easier for runners to fly downhill with abandon, with the assurance of a stable platform underneath them. We received an advance pair for testing, and the TenNine definitely changes the sensation of running – some ways we like, and others that feel weird and will definitely take some getting used to. 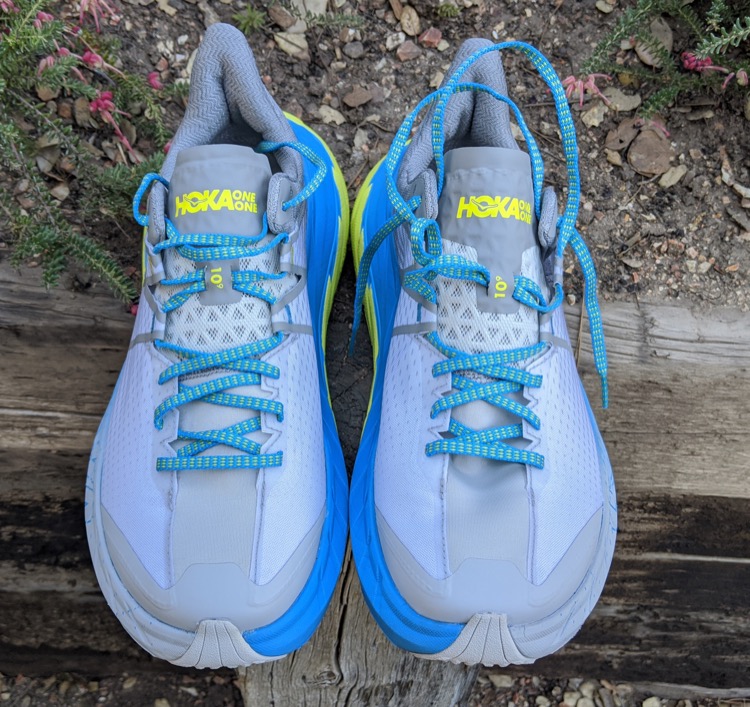 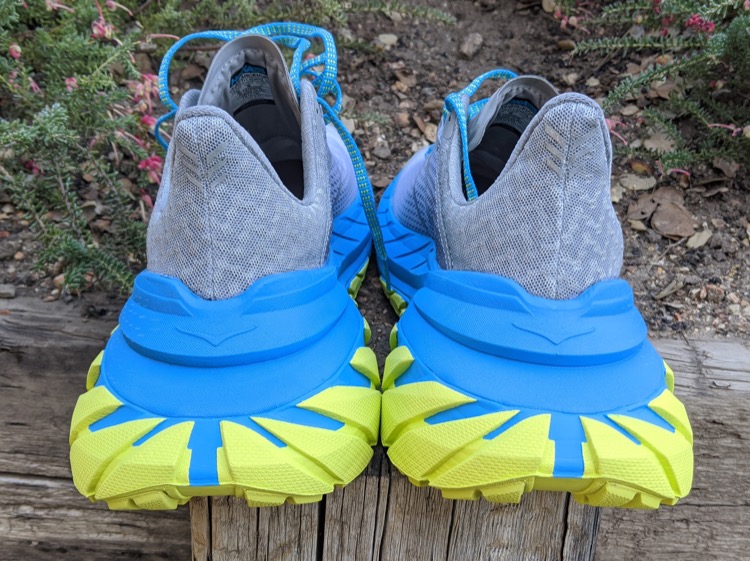 In simple terms, the TenNine stands out because of its size – particularly of the midsole, which in addition to a plush 33mm heel/29mm forefoot thickness, extends approximately an inch wider than the upper around the midfoot, and a full three inches further back than the heel cup. It’s a massive-looking shoe, and the name itself echoes this aesthetic: the working name of this model was Giga, which mathematically is represented as 10 to the power of 9.

Somewhat paradoxically, all that oversized-ness is supposed to produce a shoe that allows you to maintain maximum speed when running downhill, and create a unique running experience on flat surfaces and downhills. In our early use, we found a somewhat equal number of clear advantages and drawbacks. On the flats and uphills, ground contact comes noticeably earlier than usual, which caused a lot of scuffing, but also seemed to disperse the load more extensively through the midsole compound and decrease ground forces. The inclination is to pick your heels up higher to make sure they clear the ground, which is generally a good practice. But the relatively heavy weight of the shoes makes that adjustment tiresome with high mileage. We also found ourselves brushing one foot along the inside of the opposite ankle more often than usual due to the wider overall midsole platform. 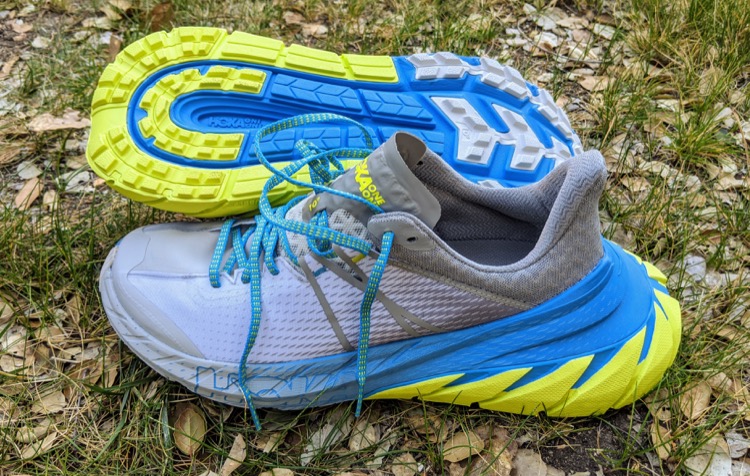 Going downhill, the TenNine does indeed have a different sensation than regular running shoes. On non-technical trails and firm gravel, there’s an enhanced feeling of stability and control, even when putting the hammer down. One analogy is to think of it like the fat snow skis that came out several years ago, which work in the same manner: giving more surface area for ground contact and improved maneuverability without compromising speed. Impact dispersion through the midsole seems even smoother when running fast than when cruising comfortably, so in this regard, the TenNine absolutely works as advertised.

However, on technical downhill sections where you have to choose your line carefully and be nimble with quick landings, the extended rear midsole gets in the way as much as it helps, and we’re still trying to accommodate this into our normal gait pattern. Going downhill through loose rocks and scree fields, we found the TenNine’s stability and agility less favorable than HOKA’s standard max-cushioned trainers like the EVO Mafate 2 or Speedgoat which have slimmer profiles and more rugged outsoles. HOKA advises that you shouldn’t wear the TenNine when going down stairs, because you may clip the heel on the stair in front of you and tumble. The problem is, we go up and down a lot of stairs on our local trails, so having a shoe that is at risk for a potential fall isn’t great for all-purpose trail use. We also found that climbing over fences or downed trees was much trickier when wearing the TenNine. 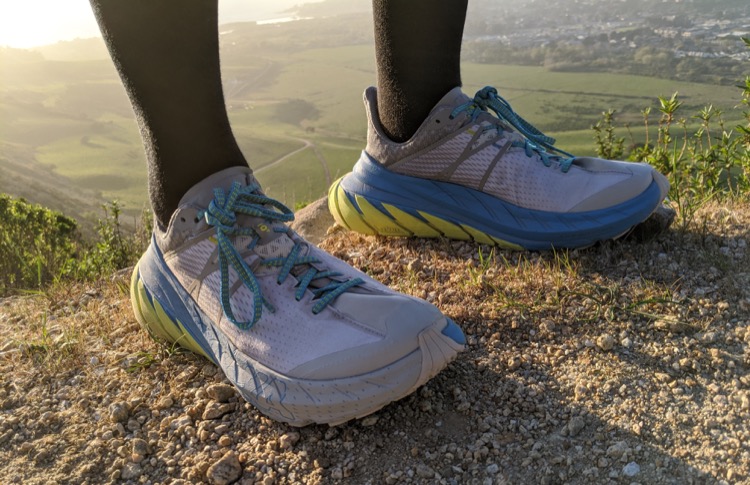 Given the mixed results of our testing, the question is where this distinctive shoe would fit in your inventory, especially given the high price tag. HOKA says the TenNine is designed for peak performance, and also as something that casual runners or hikers can enjoy – but the relatively minor advantage over existing models (increased downhill speed on non-technical surfaces) doesn’t offset the limitations it has in comparison to other outstanding HOKA models. For ultra racing, we would prefer the EVO Mafate or Speedgoat, and for long road mileage, the Carbon X is a much better option. There is a case to be made that the unique sensation of running in the TenNine makes it worthwhile as a training tool under specific conditions, which may be a compelling enough reason for those with the means to try it.

How do you think it would perform in soft sand? It seems like the additional size of the midsole could disperse the weight of the runner and not allow the feet to sink into the sand as much, like wearing a snowshoe in winter.

@Jeff: We didn’t test it in sand, but I think that’s an accurate assessment.