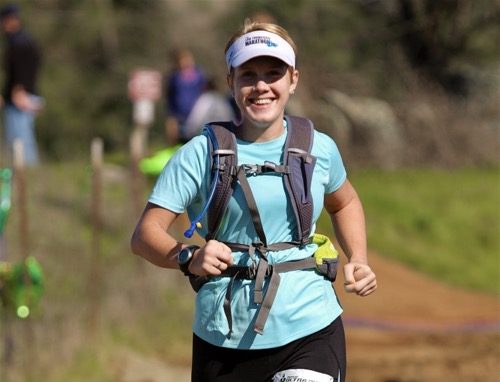 The author enjoying her first ultra – Way Too Cool 50K.

Exploring the Psychological Aspect of Ultrarunning

Five years ago, two important aspects of my life converged: my career path as a clinical psychologist, and my long-time passion for running. A year into graduate school, I faced the decision of choosing a topic for my dissertation – an original research project I would complete for my doctorate degree. Still unsure of my clinical interests at the time, I opted for something I had long been curious about: ultrarunning. I wanted to explore the psychological side of ultrarunning; that “90% mental” behind the old adage.

Much of the existing research on ultrarunning involves either retrospective interviews or analysis of physiological responses. But I wanted to know what was happening in the moment and within the mind. My goal was to assess their psychological processes, how these related to willpower, and how they influenced their ability to persevere.

A quick overview of the methodology: I had six male participants, four of whom took part in the 2016 Santa Barbara 100, and two in the 2016 Angeles Crest 100. Each provided data in the form of digital recordings made over the course of their race, and these were followed up by post-race interviews. Every 10 miles during their race, participants responded to the following: 1) Describe what is happening for you mentally; 2) How is this related to your ability to continue the race?; and 3) What else are you experiencing?

As both a novice ultrarunner and the researcher, it was fascinating to listen to these recordings. What I was first struck by was how participants described a shared range of experiences, feelings, attitudes, and aches and pains, suggesting a quality of consistency and universality for the mental experiences of ultrarunning. Furthermore, many participants appeared to have difficulty “accessing” more mental aspects of their experience (despite the questions), often beginning with, or defaulting to, what they were feeling physically. During interviews, some participants confirmed that assessing the state of their mind was less familiar to them during races, although they ultimately found it helpful. This suggests that despite an awareness of the potential importance and utility of the mind in the context of ultrarunning, actively assessing or considering its processes may be underutilized by ultrarunners.

Cognitive strategies represent intentional, mental methods used to achieve a particular goal, including assessing and attending to physical cues, “chunking” (breaking it up), mantras, and setting multiple goals. Of note are the different forms “chunking” took; not simply by mileage, but also types of terrain, night or day, and aid stations. Unsurprisingly, there was also a pretty direct link between physical state and mental state.

Attitudes are defined as intentional and settled ways of thinking about something, with confidence, positivity, acceptance/normalization, anticipation, and gratitude most prevalent. All participants indicated the importance of “setting a tone” for their race, and while they also acknowledged that it often falters, it serves as a mental foundation for how they want to think about and experience the race, and is typically cultivated during training.

The category of social support represents the effect that the presence of others – whether family, pacers, other runners, or crews – had on participants. In fact, the one participant who ended up with a DNF did not have a crew, pacers, or family present, and stated after his race that this contributed in part to the outcome of his race.

The final category of emotional states was more experiential than intentional, capturing the despair, frustration, hope, and happiness that many participants fluctuated between, and which either promoted or impeded their perseverance. Of note in this category was the temporary nature of emotions; a veritable “rollercoaster,” in which it may be most effective to learn how to ride it.

Several other elements of the data proved of interest. Perhaps partly due to their stressful nature, ultramarathons appear to have the potential to bring about personal reflections, revelations, and introspection. More than one participant spoke of this, with references to “emotional changes,” vulnerability to shifting emotional states as a result of extended time spent with self and the stressful circumstances, and an “ego strip” with opportunities for deeper introspection.

While this study is limited in scope, I’m hopeful that it will serve as a catalyst for further research as the sport of ultrarunning continues to grow. For ultrarunners, it may inform mental preparation for a race as well as promote greater self awareness and understanding of one’s mental processes while ultrarunning.

Rachel- I’m especially fascinated by runners who claim they utilize mindfulness mediation when doing an ultra. I believe “Mindfulness Running” is a book that’s just been published.

Have you interviewed anyone who practices mindfulness when training or racing?

Mike, an excellent book on the topic is “Running With the Mind of Meditation: Lessons for Training Body and Mind” (2013), by Sakyong Mipham.

Thanks for your comment. As mindfulness continues to grow, I’m not surprised that it has found it’s way into running – in fact in so many ways it’s an ideal coupling! While none of my participants utilized a specific mindfulness practice, some of the mental strategies they used involved elements of mindfulness, like body scanning, specific attentional focus, and mantras. At the time that I conducted my review of the literature on this topic, there was not much on mindfulness in a running context, so I’m glad to hear that a whole book now exists!

Rachel – I would be curious to hear from women in this area & if their mental state differs from men.

I would’ve loved to have a more diverse sample, especially women (it was not my intent to look only at men, it was simply what my recruitment efforts produced). I suspect that while some findings could be generalized to all genders, others might differ. From the beginning of my study, I considered parallels between ultras and labor and childbirth – in both, the mind can play an important role in coping with a physically stressful and painful experience. In my review of the literature, there were also some preliminary findings of gender differences in various domains. For these reasons, amongst many others, I wish that my research had included some women. Here’s hoping someone takes this up sooner rather than later!

I would love to see a deeper study on this! Maybe you can be part of the research done at Western States?

Also to piggy back off of Mike’s comment above, I would be very interested in seeing how meditation plays into this. Something that bugs me is that every running magazine has articles on the mental side of racing and training, and most fail to mention the post powerful tool in the history of mankind, meditation. My more successful races, not necessarily the fastest times, were as I was practicing meditation on a consistent level. I was incredibly focused in those races compared to races where I was less consistent or not even practicing meditation.

I think this is often the hope with a dissertation, which are inherently limited in size and scope – that it will serve as a catalyst for further research into the topic. With my topic in particular, I think there are so many interesting ways it could be expanded and looked at more deeply. I’m not sure that I would be able to get involved with the Western States research, though I think the trend in studying ultras is going to move increasingly toward psychological aspects, so perhaps they will take this on on their own!

As I mentioned above, I came across very little in my review of the literature about using an intentional meditation practice for running. For so many reasons, it seems like meditation would be an incredibly valuable strategy during an ultra. I guess we might both need to check out the book Mike mentioned above!

Have you submitted this for publication in a peer reviewed psychology journal? I’m a Senior Editor for Europe’s Journal of Psychology and I’d love to see more attitude/behavior & sports-related content featured!
Please check out our website
(Link below). Feel free to email me as well: [email protected]
Cool stuff! Natalia Wentink Martin
Link:
https://ejop.psychopen.eu/index.php

Delores Christensen did a study like this at TARC 100 two years ago (I participated in the study). 18 participants in the study I think. Video every 10 or so miles, with questions and scales for responses. Very cool stuff. You should connect w/ her and combine your data for a more complete study.

Somewhere in all of this, I firmly believe that an ultra-runner (in particular) / endurance athlete (in general) gets to a point during an event where BDNF levels in the brain are impacted…..resulting in the euphoric state (runners high) most of us experience at some time. As a combat veteran who relies on ultra-running for the therapeutic effects it can have on PTSD/TBI, I am interested, Rachel, on whether-or-not BDNF was considered in any of your research.

Much thanks for the great read.

Thank you Rachel. I quoted your dissertation in a grant proposal for, of course, an ultra marathon project. I hope you make a book out of your work. Good job!

Lee Crust and others at the U of Lincoln are doing interesting work on mental toughness and decision management by high altitude mountaineers, that might be of interest.

Rachel, interesting read. I have explored the importance of mental preparation and incorporated several techniques when running. You may find my latest post to be of some interest, together with one I wrote a number of years ago regarding ones motivation for running.
http://never-been-a-runner.blogspot.co.uk/2018/05/unearthing-holy-grail-alternative-look.html
http://never-been-a-runner.blogspot.co.uk/2012/09/ultra-motivation.html
I like the ‘ego stripping’ bit especially BTW.