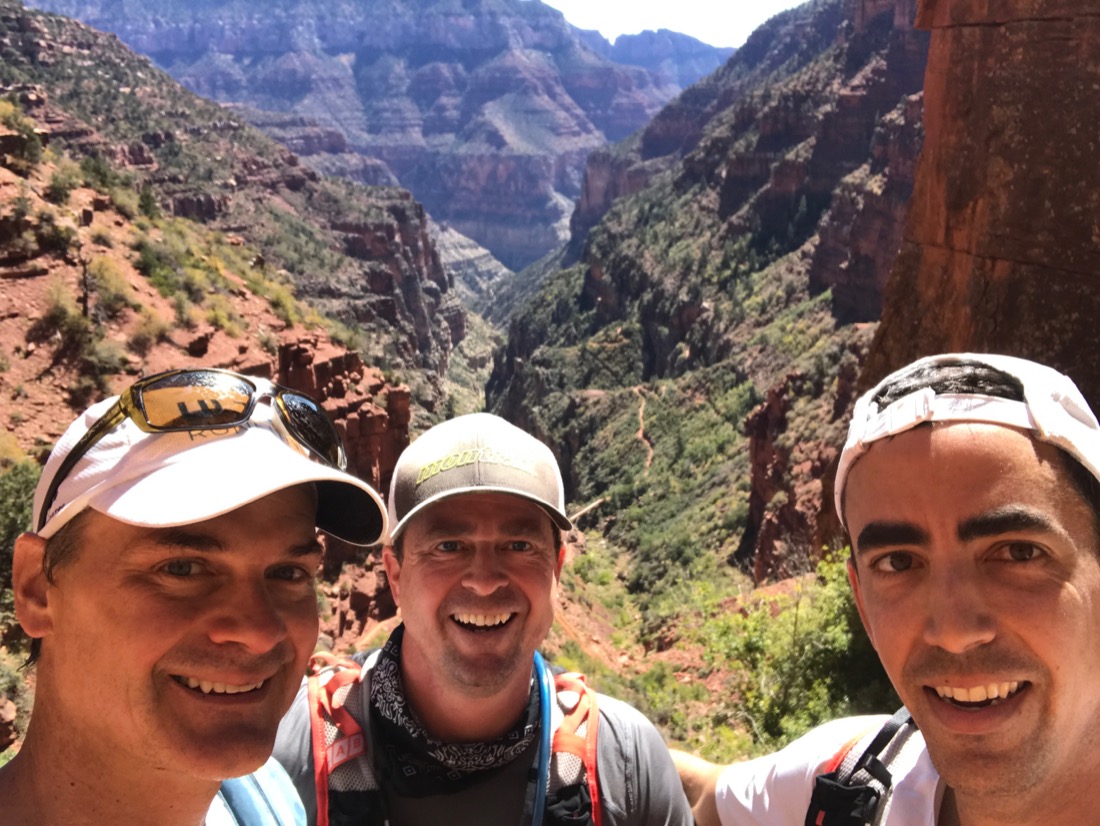 The boyz taking a break on their way up to the North Rim. Photo by Kevin Skilesjpg

Covering a lot of distance on foot is what ultrarunning is all about. And one of the best ways to do it is to just set aside a full day and pick an audacious route that traverses beautiful natural places.

Recently some friends and I did just that – the fabled Rim to Rim to Rim of the Grand Canyon on the Kaibab trail. Forty-two miles of magic. It was with two friends as we celebrated Tony Marshall’s 40th birthday in truly epic fashion.

When you visit and gaze across and into the Grand Canyon it is awe inspiring and surreal. But when you drop into it in pitch dark at 4:30 a.m. to traverse the whole thing, an indescribable sensation of being contained envelopes you. I felt small and meaningless – but also centered and alive in a new way.

I had not done much running since late June, so I didn’t know if I had what it would take to get to the far rim and back. Oh my, I was seeing the elephant. In the fear and excitement, I tried to keep my focus on preservation of quads, as Kevin and Tony surged off ahead of me down the trail – their headlamps disappearing into the vast darkness of the canyon.

Just as daylight broke, the trail emerged at the large footbridge that crossed the coursing Colorado River. Six miles in the bag with 15 to go to the North Rim – which at 8,000 feet elevation was about 1,500 feet higher than the South Rim. I knew that the half-marathon or so to the North Rim would make or break us. So I pushed a bit, not to get time in the bank, but to try to get miles done before the heat of the day set in. Soon I was paying the price as I fell off the pace on the steepening grade in the baking sun, once again losing contact with Kevin and Tony.

Then I did what many struggling runners and hikers do – I started asking people coming down “How much farther to the top?” I was certain that we were two or three grueling miles from the top, but the response was over twice that. Stunned, I stammered “Surely that’s not possible” as they slid past. After several corroborating responses to my queries, I knew I was in trouble.

Then I came upon another runner struggling even more than I was. In that instant my misery evaporated and I wanted to help. I offered encouraging words and put my hiking poles in her hands and said “Come on, let’s do this” as I moved by. Suddenly the trail was more manageable and my pace quickened. She could not hang with me and I wondered what to do. I came upon Kevin and Tony who were waiting for me in a shady spot. I told them where my poles were and why – Tony gave me his poles and Kevin stayed to wait for the struggling hiker.

About two hours later we finally emerged at the North Rim, phew… except I knew exactly what faced us. I implemented the only trick in my bag these days as I headed back – FIFO, which is an accounting acronym for First In, First Out. At every stop along the way I was bringing up the rear – but I was always the first one to start again. That has become my go-to when I need speed on the trail.

Soon we were cruising, like when an ultra race is going well. Tony’s GPS told us that one of the miles was at a seven-minute pace. We got back to the river with six miles and 4,500 feet of climbing ahead of us. I could smell the barn as we began the ascent. Somehow it was easier going up the trail than it was dropping down it in the dark that morning.

We got to the top just as the afterglow of sunset was spreading as far as the eye could see across the Canyon. We had our FKT – Funnest Known Time. Whatever is on your bucket list, make it happen and you will be glad you did.

May your every run be a great one!

Great read, thanks for sharing! I’ve done R2R2R twice now. The first time was during the annular eclipse – big mistake as the canyon was practically overrun with people! The second time, we went in early May before the North Rim was opened. What a difference! We saw less than ten people from Phantom Ranch to the North Rim and back. We finished up in the dark, but the full moon lit up the canyon beautifully. I can’t wait to get back and spend more time in the canyon!

On the USA list … also C &O from Georgetown to WV. Help … Best time of year for r2r2r? Aid on trail or supplies to carry?