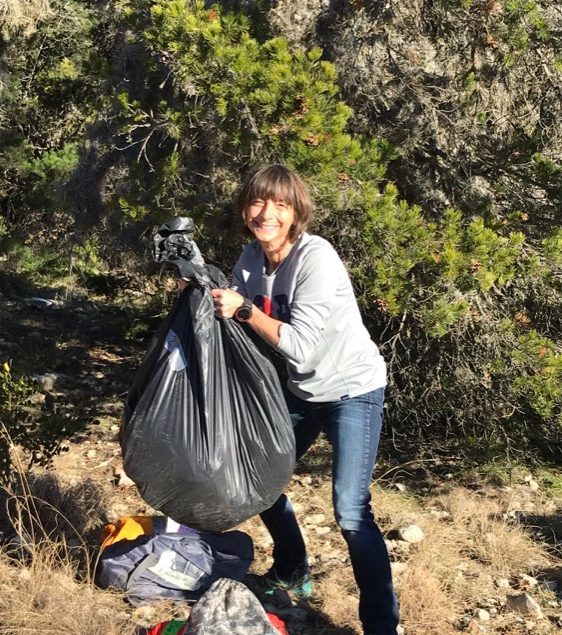 Liza Howard shows how to not pack a Drop Bag. Photo: Delane Garcia

One of the cool things about racing versus a long adventure run is that you don’t have to carry all of your gear and calories with you. Aid stations offer general food and hydration needs, but if you have specific requests, using drop bags or having a crew with a dedicated crew bag can help, if your race allows them. That brings up a couple of questions. How do you decide which type of bags to use: drop or crew? What do you put in each of those bags?

As far as deciding which bags to use, sometimes you don’t have a choice. Some races only allow either drop bags or crew bags. Of course, some races allow both, while other races don’t allow either. Drop bags are used at aid stations when you don’t have a crew, and the bags are transported by the race organizer. These bags allow you to access your own special fuel and hydration that races don’t provide, as well as extra gear you might need later in a race. As far as what to put in those drop bags, the quick and easy answer is: not too much. Start with specific fuel that you prefer, then you might decide to add gear, such as an extra shirt, jacket, hat, gloves, socks or headlamp. Having a few basic first aid items are good for longer ultras, but check with the race first as it might already staff aid stations with medics or supplies. Like I mentioned, though – don’t put in too much. Make your decisions while packing your drop bags so that when you arrive during the race, you’re not wasting time staring at a pile of “stuff” while trying to decide which long sleeve shirt and gels to take with you. Basically, if it’s in the drop bag, you should be needing that item for the next section of the race so you can just grab it and go. Don’t forget that you’ll also be able to drop anything from your pack which you will no longer be needing.

For drop bag frequency, a good rule of thumb is to use one about every 15-20 miles, meaning you’d use only one bag in a 50k, two in a 50-miler, three in a 100k, and four or five in a 100-miler. Although your pack might be slightly heavier, you’re going to save time carrying a few extra items if it means not stopping at a drop bag every 10 miles. Sometimes you get really lucky, have great weather, run the whole race in the daylight and find all of your fuel and hydration at the aid stations, and then you don’t even need drop bags.

Crew bags are used when you are allowed to have a crew at specified aid stations during a race. These are great because you can put all of the normal stuff in a crew bag that you’d normally put in a drop bag, plus your favorite goodies and extras of everything (including shoes).

You’ll want to prep your crew by telling them what you’ll likely want at each aid station so they can have those items ready for you, plus a few items “just in case.” You won’t want your crew to empty your entire crew bag at each accessible aid station because, like with an over-filled drop bag, you’ll have too many choices and will likely waste time trying to decide what to take.

If you have a crew, plan on having two packs, waist belts, bottles or whatever your preferred method of carrying your race fuel and hydration is, then your crew can prep your other pack with what you’ll need, making your transition more efficient. Upon your arrival at the aid station, you can drop your current pack, pick up the new one, and hardly break stride. This has been a huge time-saver for me in many races, and I have easily put minutes on competitors at each aid station by using this method.

Drop bags and crew bags are nice options that most ultras allow at designated aid stations and when used strategically, they can enhance your race by providing little luxuries that’ll give you a little boost during your race. Just make sure to use them wisely.

Sean Meissner has been coaching runners of all ages and abilities, and distances and terrain, since 2002. He is the founder of the Peterson Ridge Rumble and has over 250 (ultra)marathon finishes. Sean coaches through Sharman Ultra, and works and plays, mostly with his dogs, in the mountains surrounding Durango, CO.

One other benefit of crew bags is the free motivational service you can get at the same time as picking up your stuff. Perfect for when times get tough.