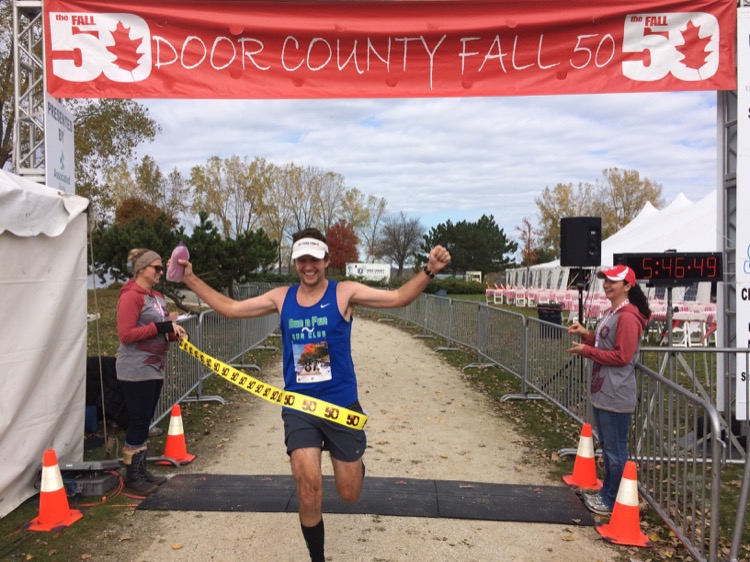 As he stepped to the starting line of the Door County Fall 50 October 22, Chase Nowak was confident he could win the 11th annual race on Wisconsin’s Door Peninsula. The air was crisp, with temperatures in the high 30s, and skies were partly cloudy. Then came the starting gun, and Mario Macias shot off the line.

“I had checked the registration list that week and thought I was in good shape,” Nowak said. “Then right from the gun, he took off, and I had no idea who he was. He was a complete surprise to me.”

Macias, of Colorado Springs, had signed up late, aiming to break the course record of 5:17:25 set in 2015 by Zach Bitter. Macias quickly built a big lead, and a few miles into the race, he was out of Nowak’s vision. But Nowak, a 27-year-old from Plymouth, MN, kept to his plan in his first Fall 50.

“I knew there might be competitors who flew under my radar who signed up the night before,” Nowak said. “When it comes to that, I really stick to my overall feel. I’m a stickler when it comes to heart rate. I was focused on my heart rate in those first couple of miles when I still had visibility on him.”

Macias kept the lead for 24 miles, but pulled a muscle, opening the door for Nowak, who walked through it and never looked back, finishing first with a time of 5:46:49. Jennie Blumentritt took first for the women in 7:30:50.

“A volunteer at mile 24 informed me that Macias had pulled out,” Nowak said. “I had no idea what was going on behind me. But around mile 35, a random person in a truck told me I had a 5 mile lead at that point in time. That gave me a confidence boost.”

From there, Nowak said he tried not to get too high. Nowak, 27, only started running ultras in 2015, and at the Ice Age 50 he learned a tough lesson. After starting fast, he crashed at the midway point, running splits two minutes slower late in the race than he started. The Fall 50 was his first road ultra.

Women’s winner, 29-year-old Blumentritt, hoped to contend, but didn’t know what kind of competition would show up. She placed sixth in the race in 2015, but wasn’t happy with her performance.

“I went out way too fast,” she said. “I didn’t know what I was doing. It was raining the whole time. I finished, but I was not a happy camper. This year I was in 4th or 5th for half the race,” said the Eagan, MN, resident, “then I started passing some ladies around mile 25.”

Blumentritt finally pulled ahead of Nora Bird near mile 31, but soon felt bad cramps in her left leg, slowing her down considerably.

“I felt really good the first 50k, then there was a long straight shot that was pretty tough,” she said. “After I took the lead, I never fell behind after that. I was 10 minutes ahead for quite a long time, but the next woman closed to seven. After the last aid station, I took off as fast as I could go because I didn’t want to lose it.”

It was the first 50-mile win for Blumentritt, who never ran in high school or college. “I ran my first marathon in 2009 and got hooked,” she said. “I’ve always been one of those people who likes being challenged.”

The Door County Fall 50 Race Director and Founder Sean Ryan plans to bring new ultras to additional geographic regions in the near future.

“People ask me if I’ll expand the race, and my answer has always been that we can’t handle more people on the Door County course,” he said. “Then a friend said, ‘No, Sean. When are you going to expand to other destinations?’ That lit a light bulb for me.”

Ryan announced plans to bring the race to Michigan’s Leelanau Peninsula and Cape Cod, MA, in 2017. He plans to add a race in Ocean City, MD, in 2018.

“As a race director, you love to sell out in 20 minutes, but the downside is you’re disappointing all of these people you have to turn away,” he said. “Now we can give them another option in another beautiful part of the country.”