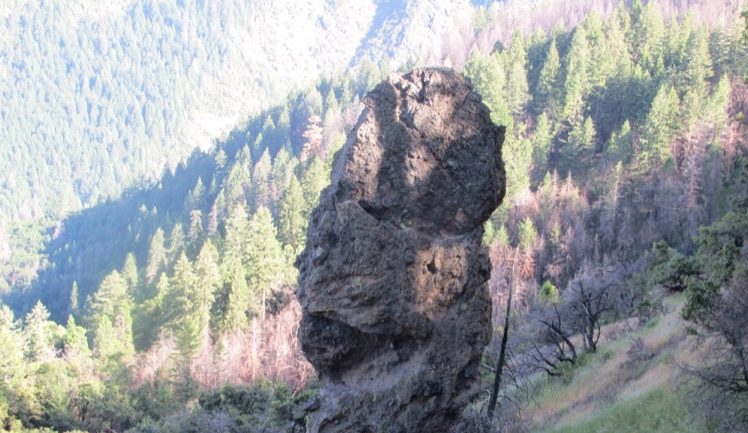 Just Like Devil's Thumb Blues...when you're overtraining, everything begins to feel like this infamous midrace climb. Photo: Jeff Kozak

January wasn’t even in the 2015 books and weekly mileage had already entered the 80s, when a chance social media interaction with an ultra friend found me standing on the shoulder of Highway 6 with eyes straining through the uncivilized twilight of a mid-winter’s morning at the 10,000’ of ascent comprising the West Ridge of 14,252’ White Mountain Peak. This iconic line just north and east of my Sierra Nevada hometown that pitched upward to the tune of 2,000’+/mile of vertical gain at times had nothing to do with specificity of training for the Western States 100. By itself it may not have been a significant training misstep; however, the drought-winter summit adventure to the roof of the Great Basin had reckless company.

When my name was called at the tail end of the early December lottery I was already two weeks into my base-building phase. Of course, I had no idea whether I would actually get in or not, but, if nothing else, it was a crystal clear, yet completely unacknowledged, ironic indicator of my impending train wreck level of excitement for another chance at getting it right between Squaw Valley and Auburn.

I intended to build a high volume aerobic base like never before, and to have it in the bank early enough to allow for extra weeks within the hill/strength and higher intensity phases of a “perfectly”-premeditated periodization. Starting at 50 miles/week and following the standard, if outdated, 10% increase rule, with a reduced volume recovery period every third or fourth week, I looked to hit that dangerously sexy 100 mile mark sometime in February, before backing off and slowly adding harder and more race course specific efforts.

Warning signs came long before triple digits. Through weekly mileages in the 50s, 60s and 70s I felt near-continuous improvement in my aerobic capacity. Both pace and heart rate lowered as fitness increased.

Then, the improvements came to a standstill. Warning sign number one. I stubbornly pressed on. Soon, not only was I not improving, but I seemed to be on a frustrating backslide. My comfortable mileage-logging pace began to slow. The pace I had been cruising a month earlier now felt like a focused effort. Warning sign number two, and exponentially more significant in signaling impending overtraining doom.

Ignoring the obvious, the vertical behemoth of White Mountain Peak from the Chalfant Valley floor was recorded in the training log. Had I opted for that and foregone my 80+ mileage week, my training wheels may have stayed somewhat on the tracks. Instead, as tired as I was from the vert, altitude and overall effort, I flogged myself through that week’s preplanned mileage goal. Most of the miles were joyless and, in retrospect, a completely worthless slow-motion junkshow. 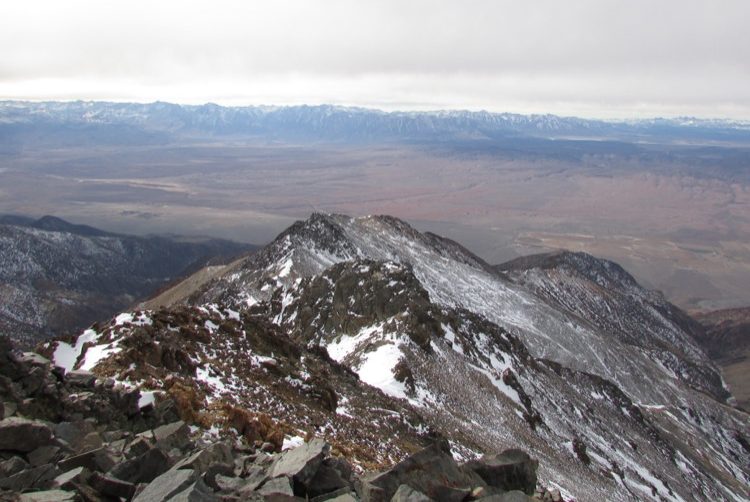 Looking down the West Ridge of White Mountain Peak and throwing specificity of training out the alpine window. Photo: Jeff Kozak

The week before February’s Sean O’Brien 100K I succumbed to a nasty head cold, and pulled the plug on a miserable race day of grinding through fatigue and lingering stuffiness at 50 miles. It took the remainder of the month to feel as if I had fully recovered, but as the spring equinox passed I had to admit to myself that I felt anything but “normal” on most runs. I packed my bags for Healdsburg, CA and the Lake Sonoma 50 Mile.

As ultrarunners, naturally we love to run. Unfortunately, this enthusiasm for the primal act of running, and its Dr. Feelgood of Fitness-endorphin-effect is often not tempered enough by sensibility. More is only better to a certain point; then the law of diminishing returns kicks in. There is a lot of individual variability in the peak training volume of most benefit to maximizing performance potential, and this can really only be teased out by trial and error…and actually paying attention to the results.

One thing is for certain though: there is no magic in 100 miles per week. It’s simply a sexy and alluring round number. That is all. For every athlete this mileage is appropriate for at any point in their training cycle, there are countless others for which it symbolizes a significant risk of injury and illness. And often, a disturbingly loud, and largely ignored, backfiring of fitness.

In the business world a volume discount refers to the price lowering that occurs when a product is purchased in greater quantities. Distance runners have long, and tenaciously, held onto the belief that an ever-increasing training volume is the base-building ticket to that decrease in effort at a given pace that yields faster performances. The arbitrary number 100 has become a sort of numerical mascot to this mentality, but what it more accurately represents is an abundance of overtrained athletes, hanging on by a sinewy thread at the starting lines of dream races. The volume-for-the-sake-of-volume mindset needs to be discounted, and replaced with a quality over quantity approach. Cat Bradley won Western States as a one-ticket rookie on a maximum of 70-80 miles per week. Quality. Over. Quantity. 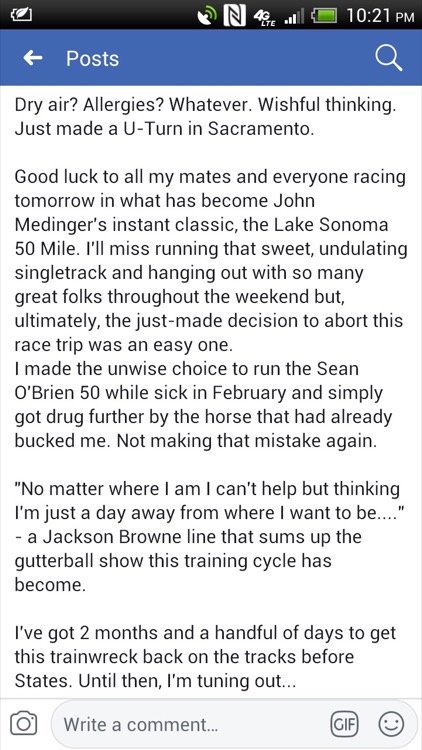 The overtraining FB post that led immediately, thanks to my Auburn ultra friends, to the alternative trailname, “U-Turn.”

Awake before my alarm, I let out a disbelieving sigh. My throat had that nondescript-yet-distinct “funny feeling” that always precedes a head cold, and always produces a several hour period of illness denial. On the drive to Healdsburg I pulled off the interstate in Sacramento and sat staring blankly out the windshield at a pancake-flat Central Valley. That funny feeling was now yet another full-blown upper respiratory infection. Western States was still over two months out but I felt as flatlined as the surrounding countryside. In a fit of frustration and deep fatigue, I turned around, drove back home, and crashed into the void of dreamless sleep for 15 hours.

The Facebook post that garnered me an alternate trail name (the first will be revealed in a future column), also came to represent an initial confidence ribbon-sighting turning point after a long period of feeling as if I was too far off fitness course to be race ready by the last weekend in June. Ultra friends that knew better convinced me to road trip to Auburn. Barely through the front door, a buckle’s toss from Robie Point, they ripped into me with some good-natured tough love. U-Turn? They knew I was fit, and had plenty of time to get personal best fit, if I would only get a governor on the gas pedal of my turbo-charged mind. I was so in love with the dream of returning to the original 100-mile dance floor that I had completely lost sight of the delicate nature of the training steps involved; and I was making myself sick, both physically and mentally, over and over. 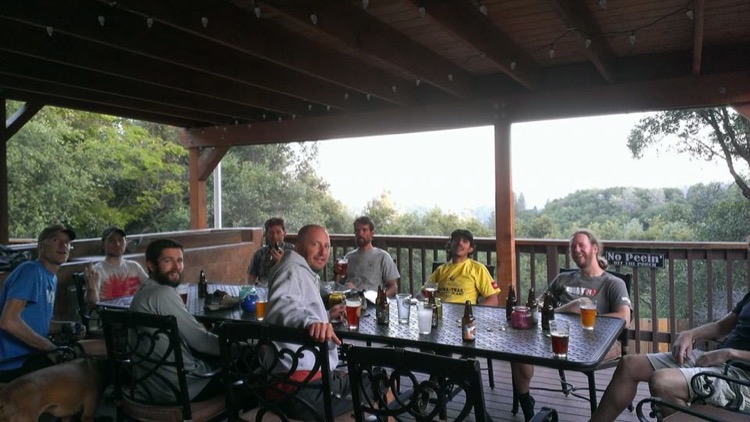 The antidote to overtraining…my first “Social” following leading my first “Hunt” in Auburn, less than a miracle mile from the track where the magic happens once a year. Photo: Jeff Kozak

Unlike many overtraining crazes, mine has a happy ending. “When it’s on, it’s on,” longtime friend, Andy Jones-Wilkins, greeted me with as I cruised onto the Placer High School track for the final 300 meters of a personal best Western States performance. In the final two months leading up to race day I had found a balance between my excitement and reason, and narrowly dodged the burnout bullets. Or, so I think.

Science studies in a vacuum of controlled black-and-white variables. We perform in the gray of the real world. There is a gap of uncertainty that will always be there, leaving the door wide open for constant refinement of training approaches. It’s quite possible I left minutes, or even hours, on the cutting room floor beneath the training table. I’ll never know for sure.

I’m convinced though that most of us could benefit greatly from at least experimenting with a less-is-more approach. When you’re highly motivated, the mind will easily bite off more than the body can, or needs to, chew. The trick, I think, is to reserve that mega-meal of effort for race day, and stick to smaller portions along the way. As with broccoli and moms admonishing their obstinate children, you’ll never know until you try.