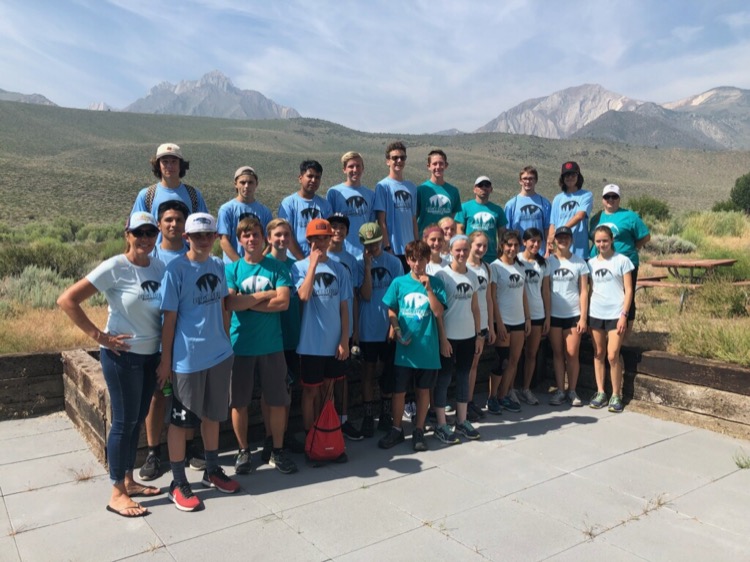 Destination Unknown: The Kids Are Alright

“My two mile PR in high school was 10:04.” Daniel Tapia, a 31-year-old member of the Mammoth Track Club (MTC), was responding to questions being fielded from a crowd of high school and college runners gathered in Shady Rest Park, an idyllic cluster of nostalgia-inducing grassy fields nestled amongst the towering pines at 7,500’ in Mammoth Lakes, California. The park was alive with height-of-summer activity. It was the first in a series of casual Q&As, replete with locally-sourced pizza, paneled by a wide-ranging cadre of professional runners, being hosted by the MTC, and emceed by Coach Andrew Kastor.

Lively and engaging at the mic, Andrew casually mentioned that Daniel’s current marathon PR was 2:12.28. “Anyone know what pace per mile that is?” The answer was: 5:02. Through years of hard work, patience, and belief in the long and winding process of his chosen passion, Daniel was now running 26.2 miles at the same pace he ran two miles as a prep runner.

Sitting in the back overlooking a sea of youthful athletes, my grin reached across the gazebo. Not on the original schedule of this inaugural high school High Sierra Running Camp, we had rerouted the itinerary at the last minute. And it was absolutely worth it. This was exactly the type of “there are theoretical but not actual limits”-story these young runners needed to hear.

Earlier that day Coach Kastor had conducted a drills clinic at the nearby track facility he and his wife, three-time Olympian, bronze medalist and marathon American Record holder, Deena Kastor, had been instrumental in getting developed. The setting never ceased to feel surreal. A university-quality all-weather track with a world-class alpine backdrop: at 7,000’ one could burn lungs and laps as the “Eiger of the Sierra,” Mt. Morrison stood sentinel to the south.

Listening to Andrew talk, and watching him skillfully educate and entertain as the kids were guided through a series of active-isolated stretches, mobility drills, and strides, my mind drifted back through two decades of ultrarunning to a time when the 5k cross country distance felt as long on possibilities as the starting line of an ultra. It was Day Three of the camp, and although a snow-free Sierra backcountry beckoned with the siren song of my own desires, there was, at that moment, no place else I would rather have been. 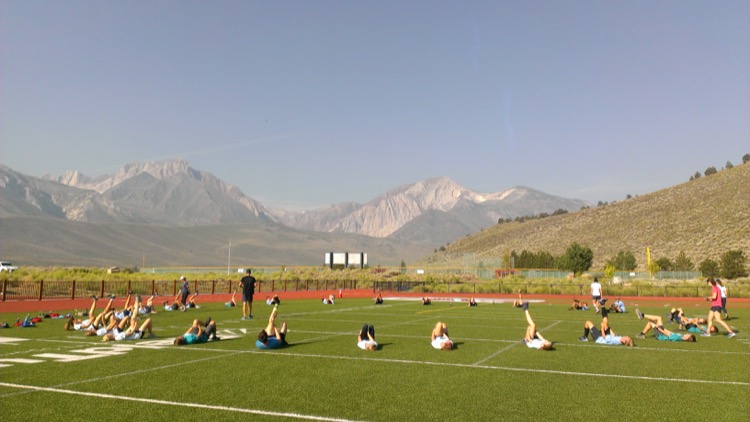 Earlier this year, less than 24 hours after sending an email that would initiate some long overdue personal changes, the universe responded in the form of a query from the local high school cross country coach, Heidi Eldridge. We had initially connected the previous fall to redesign the Bishop HS race course.

With a fully-ingrained ultrarunner’s mindset, my initial attempts were laughable and would have likely found me standing before some parent/coach/administration tribunal attempting to defend a completely spectator-unfriendly course with 1,000’ of ascent. The final result yielded one of the most challenging seals of approval, perhaps begrudgingly on some counts, to acquire: acceptance from the kids.

Heidi was putting together a multi-day running camp and wondering whether I would be interested in leading some runs and clinics? Not known for quick replies, my fingers hit the keyboard immediately: I’m in. All four days. On-site. I’ll make it happen. 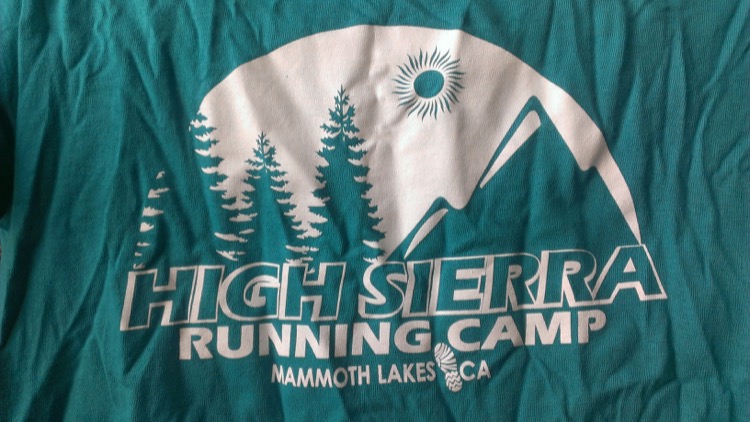 Camp shirt. There is a tremendous amount of inertia to overcome in getting any first-year event off the ground, and Coach Eldridge made it happen, with great success. Photo: Jeff Kozak

This was a first for Bishop, and unique among the multitude of high school camps that take place in the Eastern Sierra every summer in that it was open to kids from any school, anywhere. Like a tentative race director launching a new event, Heidi had been anxious about gathering helping hands; however, within a month a talented and diverse group of local athletes and professionals had committed their time. As with ultra, volunteers always seem to materialize when the potential for magic is present.

The last time I was surrounded by 25 high school kids, I was one of them. Leading the first afternoon run of camp, I quickly became acquainted with the concept of “herding cats,” a phrase recently heard to describe keeping track of groups of teenagers. Predictably, the group rapidly accordioned relative to individual algorithms of ability and current off-season fitness levels.

And, also as expected, despite admonitions to keep the effort level easy and to “run your own comfortable pace,” it quickly became auditorily-obvious who was aerobic and who was redlining. Clashes of excitement, ego and concepts of proper pacing begin early. Sound familiar? Ultrarunners have been carrying that torch into adulthood for decades.

Somehow managing legibility and horizontalness, I read from the eraser board I now nervously stood before:

“I’m in a rivalry with myself. The goals I set are very high.” – Roger Kingdom. 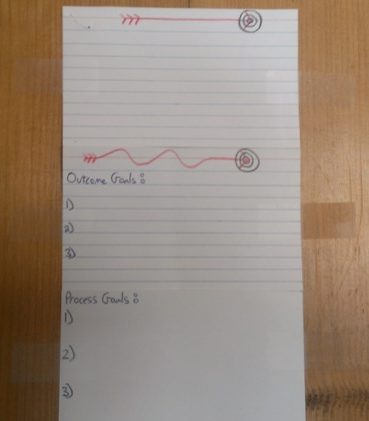 An exercise highlighting the reality that, although important in defining the WHAT and WHY, outcome goals are somewhat meaningless without process goals, which direct the HOW of the day-to-day. “Why did I change the arrow from straight to wavy?” I asked. “Because there will always be ups and downs along the way,” replied one kid. I smiled. Exactly! Photo: Jeff Kozak

The last time I had given a talk before a large group had been nine years earlier, a presentation about the supported John Muir Trail FKT attempt I had pulled the vacuous plug on with 42 seemingly infinite miles remaining. Instead of a singular go-for-broke FKT goal, I could have greatly benefited from the “tiered goals” approach I would later discuss.

This talk was on the value of goal setting and I was attempting to illustrate straight away the hard-won truth that, beneath the outward and organized competition with others, and our society’s insatiable focus on winning, we are ultimately only competing with ourselves. We all start on vastly disparate playing fields of hereditary talent with a curve of potential arcing upward to some unknown destination. The primary goal should simply be continually working toward a better version of whatever we arrived out of the womb with, wherever our passions lie, whether it be as runners, or elsewhere.

Hoping to further drive home the point, I told the story of John Sence, by far the most talented runner to pass through the halls of my alma mater, Milford High School. Second at Kinney Cross Country Nationals, he was also second at every state championship he ever ran. Number two in the nation, and he never won a state title. Why? He competed in Ohio during the same four years that Bob Kennedy, the best American distance runner to come along since Steve Prefontaine, was blossoming into a future Olympian.

“I guess I was just born in the wrong state,” John once painfully quipped to a Cincinnati paper. The quote always struck me as the perfect illustration of the fact that we have no control over others, or certain luck-of-the-draw aspects of life. What we can control is ourselves; and setting goals is an essential component of maximizing this power of self. 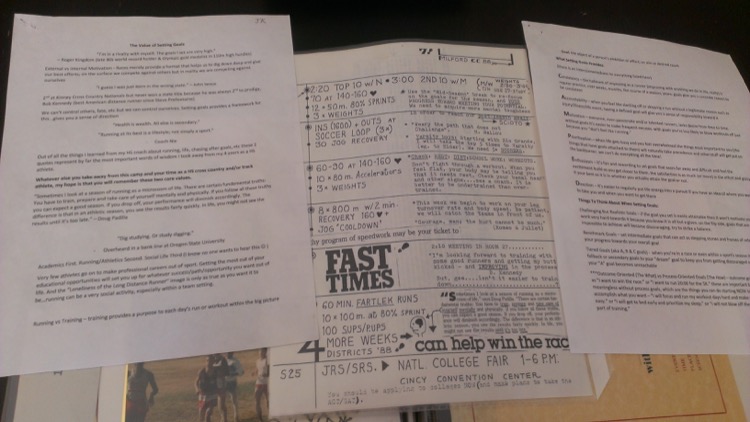 You rarely recognize until much further down the road of life who has had the greatest impact. The foundation of what I talked about during the camp was largely poured 25 years ago, during my own tenure as a HS runner; and subsequently remodeled through my own unique experiences. Photo: Jeff Kozak

Throughout the camp, I was continuously amazed at the unique angles and styles with which the volunteers presented their diverse topics. From a discussion on melding more typical black-and-white training log entries with the colorfulness of running-inspired prose writing, to clinics on training methodologies, nutrition, cutting-edge based anatomy-in-motion mobility techniques, athletic longevity, and team dynamics within seemingly individual sports, everyone added an inspired layer to the cake of inspiration we were attempting to bake in impressionable minds.

My amazement extended to the diverse group of kids, from several local and far-flung schools, and how generally well-behaved, respectful and engaged they were throughout. If assisting in overseeing a group of teenagers was indeed akin to “herding cats,” this group of cats was cool in all the right ways. Combined with Coach Eldridge’s enthusiasm and leadership, the camp flowed as smoothly as carpet-trail single track.

During the final undulating trail run of a resoundingly successful four days, I found myself working hard to keep pace with two of Bishop High’s female athletes. I already knew them both, marginally, but now saw them through the eyes of my past. The natural ability was obvious. But innate talent is limited in its utility at best, and useless at worst, without the other ingredients I now chased around Convict Lake: drive, determination, motivation and, most importantly of all, a love for the “sport” of running. 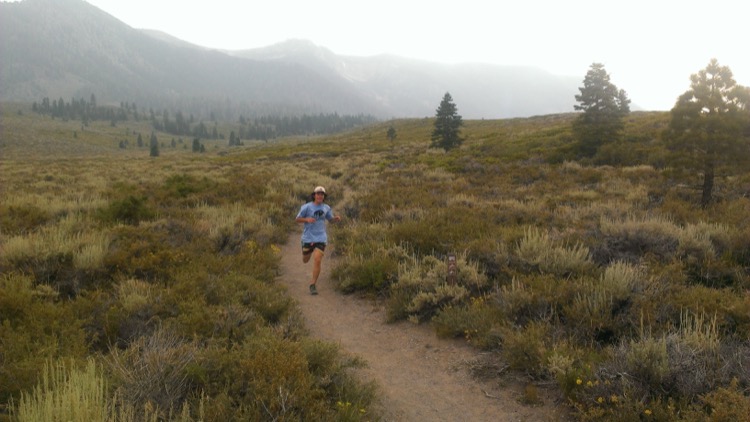 At the standard high school events of the mile, two mile and 5k, I never improved after graduation. One could look at that as disappointing, but another perspective is this: I was fortunate enough to have passionate and caring coaches capable of wringing out every ounce of modest ability I had within the confines of those distances. This, however, was not their greatest gift.

The fact that I was here, at this camp, sharing bits and pieces of a lifetime’s worth of running experiences and knowledge, was the gift I carried with me beyond those formative years. We were all inspired by someone, at some point; and the redemption value of making an effort to recycle that inspiration in others is infinite.

My coaches had always framed our short-term team and individual goals within the broader picture of life. Running was only one piece of the puzzle, but needn’t be a temporary piece, discarded once out of school.

During that goal-setting talk on the first evening, I shared the two intertwined values, irrespective of anything else learned, I hoped they took away from the camp:

Health is wealth. ALL else is secondary.

Running at its best is a lifestyle; not simply a sport.