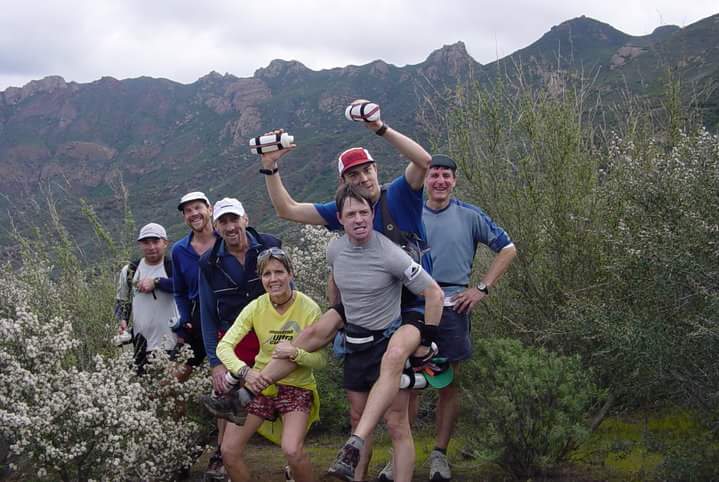 “and I thought I had found a light to guide me through my night, and all this darkness, I was mistaken, only reflections of a shadow that I saw…” — ‘Laughing,’ David Crosby

There was this guy peering over my shoulder, which wouldn’t have been such an odd thing, except I was taking a leak on the side of a trail. Before urinal-row-style stagefright could set in and staunch the flow, he laughed and, perhaps attempting to ease the air of awkwardness, stated as if it was a completely normal practice, “Just checking to see if it’s clear and copious.” I grinned involuntarily ear-to-ear. I didn’t know him very well but this guy was easy to like.

It was February of 2004 and we were in the middle of a 50-miler in the Topatopa Mountains near Ojai, California, day two of the now-stuff-of-legend Coyote Fourplay (C4P), an event that totaled 127 miles (7-50-40-30) over four days and an equal amount of nighttime partying mileage equivalents. As pace would have it, I spent several hours of that day running with this accomplished athlete from the Pacific Northwest.

Highly successful professionally as well, a longtime radiologist, the final piece of his charismatic puzzle fell into place during C4P. He was every bit as engaging, humorous and giving with his knowledge of the sport and medicine as friends of mine that knew him much better always claimed. I had maybe crossed paths with him a few other times, but in these ephemeral moments of interaction, a lasting impression was passed on. He was an ultrarunner’s ultrarunner; the kind of person that nudges you down the lifer path in this sport. I never saw him again.

In September of 2009 I got a call from one of those mutual friends who was much closer to him. It was the kind of news that turns thoughts into a viscous, incoherent sludge; the kind that doesn’t assimilate with the here and now readily under any circumstances. In this instance, with what I knew of the man, it barely registered at all. I’m not sure if I ever really processed it until more recently.

The line of ultrarunners that have come forward over the years to speak openly about their battles with depression is long and illustrious; and that darkness is often confusing when held against the light of their accomplishments and the boundless energy and enthusiasm permeating this sport. And it is impossible to ignore the implications; it seems no kind or amount of success or communal recognition affords illimitable immunity.

If our personalities form, at least in part, as a defense mechanism response to the chaotic external world and our often struggles to reconcile ourselves with that inherent insecurity, then surely our obsessive passions, such as with running, also partially develop along that same line. The problem though, as with anything used, if only partially, as a coping mechanism, is the underlying issues, if you are fortunate enough to even identify them, never get resolved. And they can resurface forcefully when the distraction is – even temporarily – removed.

I’ve been slow to consciously recognize and admit to some of the classic patterns of depression in both my present and past selves. I can’t stand the term. I’m possibly even using it inappropriately. It sounds so clinical. It also sounds so black-and-white, when there’s most certainly a sliding scale of gray beneath the full-blown symptoms of a true diagnosis. I can’t say I’ve ever been to the edge and peered into the void that seems often to accompany severe depression, but I’ve most certainly had confounding weeklong bouts of insomnia, prolonged states of strangely high energy that often find an outlet in the mountains or in writing, and periods of exceptional lethargy, what’s-the-point-of-it-all thoughts, and intense lack of motivation defined by seemingly random days where I struggle to leave the house, and won’t if I don’t have to. Is it depression? A basic-but-intense need for occasional escapism, even from what I love? A particularly potent case of seasonal affective disorder? Is it simply psychologically part and parcel with being human, differing only by individual degree, and millimoles of chemical compounds? A stoichiometry of emotion that is only partially within our conscious control?

The pattern has undeniably amplified as I’ve gotten older. The wavelength varies but the highest peaks are almost without exception in the summer and the deepest valleys are primarily confined to the winter and most certainly exacerbated by too-extended a period of downtime from regular running; turns out that classic tandem of off-season with the low light of our planetary home’s annual elliptical orbit at Desert Southwest latitudes isn’t a positive pairing with my personality. I am most certainly solar-powered. Technically, we all are. My cerebral cortex just happens to readily wear it on its synaptic sleeve.

Take away the seasonal and movement components and other potential root causes of the dramatic ups and downs are a big mystery. There are some evolutionary psychologists that theorize, at least mild, depression as a baseline emotional state in humans. Given the heady condition of being a mammal with the basic instincts of a reptilian brain wrapped in the analytically-contemplative conscience of a much more recently evolved cortex , it’s hard to argue with that, but the real talking point is: what can we do about it to keep life’s neuronal tapestries from a complete and permanent unraveling? Recent and on-going self-reflection has seemingly, hopefully, provided me a better de-amplifying grasp; not everyone is so fortunate.

‘He hid it well,’ was my friend’s response to my silence followed by incomplete sentence stumbling. I will never know what my ‘ultra friend’ was battling within. It certainly must go much deeper than having a shining spirit turned sideways by relationship and injury turmoil. From what I understand, it seems no one, not even those close to him, had any real idea. Therein lies the challenge. It’s not much of a cerebral stretch to grasp why someone in a dark place mentally would prefer to internalize it and slip on a happy mask when heading out into a self-absorbed world. Nor is it difficult to see the unlikelihood of recognizing warning signs in others when you’re in a state of blissed-out endorphin contentment. We deal daily in partial information while somehow convincing ourselves otherwise.

Knowing the openness that the trail brings to many when sharing miles, it’s disheartening to think that sunlit singletrack and a good dose of vert is not necessarily always enough to get the really heavy stuff to centrifuge out in conversation. Recognizing that we, as ultrarunners whom tend to slide easily into the silky superhero suit of invincibility, are every bit as susceptible to the slippery slope of self-doubt is a starting block we should all kneel into at some point to reflect upon.

So, to Dave Terry, all these years later, and as much as I likely ever will: ‘Now, I think, maybe, I understand.’ I know I speak for many though when I say that even a complete understanding wouldn’t diminish the sentiment of wishing you were still around, so that we could help, as Tim Twietmeyer is fond of saying, to “rehab the rig,” just as you did for countless others, both on and off the trails.

I knew Dave years ago. Thanks for writing this.

Thanks for reading, Julie.

Wonderful! The right words at the right moment. Thank you!

Thanks for reading, Stuart. – Jeff

Thanks for a wonderful reflective insight into depression and the ties into the ultra running community. Dave’s personality and feats were legendary. He was superhuman. If his death continues to serve as a wake up call to the entire ultra running community and depression, his family and friends will take comfort in this devastating loss. Please continue writing and encouraging your ultra friends to seek balance.

Thanks for reading, and for the feedback.